It's been a month since Rishi ji has left for the heavenly abode and his family members are remembering him on his one-month death anniversary! Can you believe it's been already a month since we lost a gem of a person and legendary actor, Rishi Kapoor? April 30, 2020, was the dreadful day when Rishi ji had taken his last breath before starting his journey for the heavenly abode. The entire Kapoor family and the whole nation was in utter disbelief because of Rishi ji's untimely demise. The family has been mourning his loss since then. Scroll down to know how his loved ones remembered him on his one-month death anniversary! (Recommended Read: Irrfan Khan's Wife, Sutapa Sikdar Hopes To Reunite With Him On His One-Month Death Anniversary)

Death is inevitable and so is pain, someone once said, 'Pain demands to be felt!' Truer words have never been spoken before. The whole nation is recalling memories of two legendary actors who left us mourning and their untimely demise was a blow to our hearts. Rishi Kapoor, who took his last breath one-month ago on this same day, is still alive in our memories and hearts and will be forever till eternity! 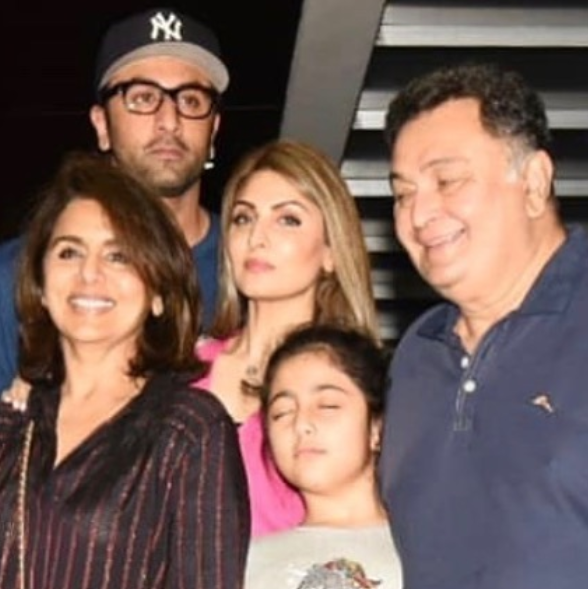 The pain of the void that the other half feels when one of them succumbs to the heavenly abode can be felt in Neetu ji's remembrance of her deceased husband, Rishi Kapoor, on his one-month death anniversary. She shared a very old, unseen picture of herself with Rishi ji, from their younger days. The picture is a gem of a memory as all their iconic performances together, simultaneously come to mind on taking one look at it. In the picture, Neetu ji and Rishi ji can be seen twinning in blue shirts and blue denim. Neetu Ji could be seen standing in the picture, while Rishi ji could be seeing sitting and lovingly holding her hands. Neetu ji captioned the picture as "Wish me luck as you wave me goodbye Cheerio, here I go on my way with a cheer, not a tear, in your eye give me a smile, I can keep for a while in my heart while I'm away." Take a look at the picture here: Rishi Kapoor's daughter, Riddhima Kapoor Sahni took to her Instagram stories to pay tribute and remember her late father, and veteran actor, Rishi Kapoor on his one-month death anniversary. She posted a happy family picture of herself along with her father, Rishi Kapoor, her mother, Neetu Kapoor, her husband, Bharat Sahni and her little daughter, Samara Sahni. The picture reminds us of the good old times when happiness had prevailed around us and we had the vicinity of our loved ones. Riddhima also wrote a sweet message atop the beautiful picture, which can be read as "Say not in grief: 'He is no more' but live in thankfulness that he was- Hebrew Proverb. One month today we miss you." Take a look at the unseen picture here: 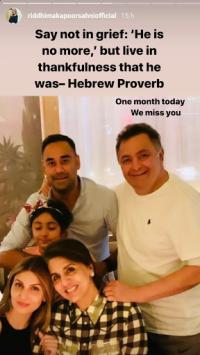 Rishi ji's beloved son-in-law, Bharat Sahni also remembered him on the day which marked his one-month death anniversary. He shared a picture from Rishi ji's prayer ceremony. In the picture, we can see Rishi Kapoor’s picture at his house with a lamp lit up in front of it as a mark of respect. Have a look at the picture below: (Also Read: Arti Singh's Birthday Wish For Brother, Krishna Abhishek Is All About Love, Shares A Lovely Picture) 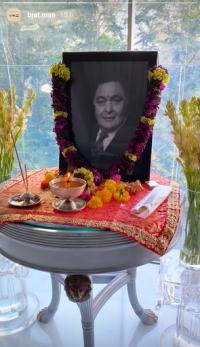 Ever since Rishi ji's demise, his daughter, Riddhima Kapoor Sahni’s Instagram handle has been all about the memories of her father, Rishi Kapoor. Time and again, she keeps sharing her father’s pictures on her Instagram handle and stories. Riddhima had taken to her Instagram on May 29, 2020, to share the story of her Scrabble game charades with her mother, Neetu Kapoor. Riddhima had shared how her father had trained her mother well in the game as her mother has already beaten her twice in the game. Sharing the picture of her scrabble game, she had written “Dad trained mom well!! She beat me twice already! @neetu54” atop it. Take a look at the picture: (You May Also Like: Neena Gupta And Masaba Gupta's Hilarious Social Media Banter Is Every Mother-Daughter Ever) 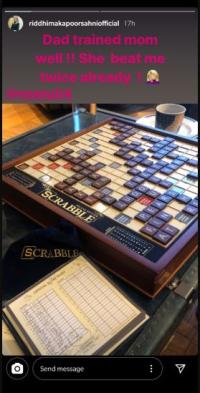 You'll always be in our hearts Rishi ji!