Navya Nanda Has The Sweetest Reaction To The Climax Scene Of Amitabh Bachchan's Film, 'Naseeb'

Navya Nanda Has The Sweetest Reaction To The Climax Scene Of Amitabh Bachchan's Film, 'Naseeb'

Amitabh Bachchan reveals how the climax of his 80s film, Naseeb was shot and his granddaughter, Navya Naveli Nanda has the sweetest reaction to it.

One of the most talented star kids, Navya Naveli Nanda leaves no opportunity to make her family proud with her achievements. Heart and soul of the Bachchan and Nanda clan, Navya is a Fordham graduate and is the co-founder of a healthcare portal, Aara Health. After Navya had made her IG handle public, we often get to see glimpses of her close-knit bond with her family.

Also Read: Shoaib Ibrahim Shares An Adorable Picture Of His Parents To Wish Them On 36th Wedding Anniversary

Navya shares a very warm bond with her nanaji, Amitabh Bachchan. To mark his 78th birthday on October 11, 2020, Navya had shared the most adorable wish for him. She had taken to her IG handle and shared a cute picture, where Navya was seen hugging him her nannu, Amitabh Bachchan. Along with the picture, Navya had written, “The line will always start from where you stand…happy birthday to the greatest of all time but worst charades player ever. I love you nana!” On June 23, 2021, Amitabh Bachchan took to his IG handle and shared a picture from the sets of his 80s film, Naseeb. Revealing how the climax of the film was shot, Amitabh wrote, “The matador and the gun... film NASEEB... climax on a rotating Resturant... a set built at Chandivali Studio... and it rotated... so action scenes, drama, Resturant on fire, all... done while it rotated... Only the great Manmohan Desai could conceive all this... and succeed... and we’re talking the 80’s... no VFX no CG nothing…those were the days my friend.” 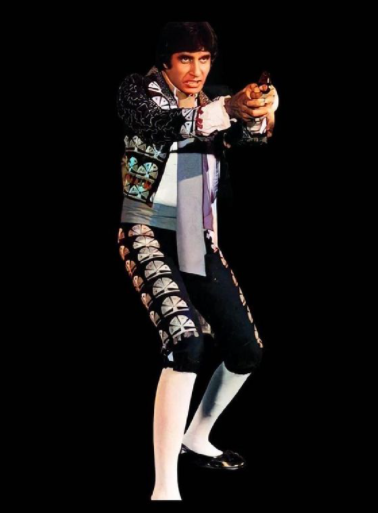 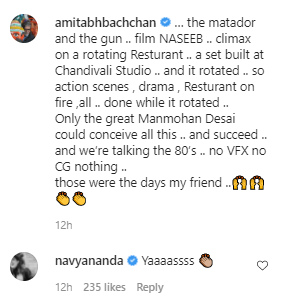 Navya is quite active on Instagram just like her grandpa, Big B. In March 2021, when Big B had shared his midnight thoughts on music, Navya had dropped the sweetest comment on his post. Dressed in a tracksuit and printed bandana, Mr Bachchan was seen relaxing on the couch with a recording mic in front of him. He had captioned the picture as “If music be the food of love play on... give me excess of it...” To which, Navya had commented, “Love you” followed by a heart emoji. 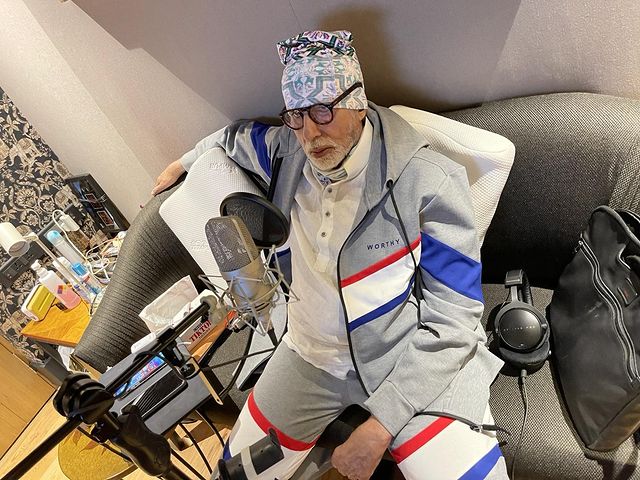 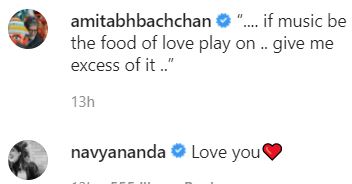 Unlike the star Bachchan family, Navya Naveli Nanda won’t join the film industry but instead is gearing up to start working with her father, Nikhil Nanda, in their family business (Escorts Limited). Navya had expressed the sense of pride she is feeling in being the first woman in her family to take the lead in the family business. In her interview with the Vogue, Navya had said, “I would be the fourth generation of the family taking the lead—and the first woman. It is a great sense of pride for me to be carrying forward this incredible legacy left behind by my great-grandfather HP Nanda.” Amitabh Bachchan will next be seen in Jhund and Brahmastra! The Bollywood industry has given us some adorable on-screen father-daughter duos over the years, who won our hearts with their magical bond. Amid this, some real-life celebrity daddy-daughter duos never miss out on a chance to dish out major relationship goals. Janhvi Kapoor and her producer-dad, Boney Kapoor share a warm