Among the media speculations about celebrity affairs or divorce rumours, it is always difficult to judge which story is true and which is not. A few months back, another famous television actress went through a rough patch in her marriage.

We are talking about Dill Mill Gayye fame Muskaan Mihani, who got married to a businessman, Tushal Sobhani on September 1, 2013. They were blessed with a cute daughter in 2015 and they named her, Mannat. Muskaan took a sabbatical from her work, focused on her family life and gave all her time to her little munchkin.

There were conjectures about troubles in Muskaan’s marital life and the actress has been living separately from her husband. There were reports of Muskaan leaving her husband’s house with her daughter and living with her family. According to the source, Tushal never took charge of their daughter and was abusive in the marriage, always saying demeaning things to her.

But later in an interview with Indian Express, Muskaan refuted the rumours by saying:

“It’s not true. This is a false news. Everything is okay.”

Reacting to her divorce rumours, she said:

“I am very upset with these stories. I don’t know from where did this come up. People should understand that such a thing can ruin a girl’s life. The things that have been reported as said by my husband, he never speaks like that. I have a child. People should at least contact me before running these stories.”

And now, the couple has slammed all the speculations of their divorce by making a public appearance together at the launch party of Vahbiz Dorabjee's show, Showbiz With Vahbiz. Fortunately, it seems like they have sorted their differences and are giving their marriage a second chance (if there was any problem). And also, Muskaan has captioned the Instagram pictures of her daughter with the hashtag #daddysgirl, which puts an end to the rumour of Tushal not taking charge of her daughter. 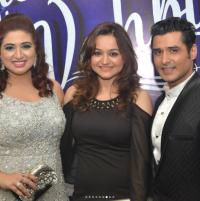 We are so happy for Muskaan, Tushal and Mannat. Your fans don’t want to see you parting ways and so is the case with us! And all you guys, stay tuned with us for more updates related to your favourite TV and Bollywood celebs!

NEXT READ: Anusha's Adorable Birthday Wish For Karan Would Make Any Boyfriend Swoon Over Her