Mouni Roy oozed the glamour in a glittery blue dress at her upcoming movie's wrap party. If you want to recreate this look, then read on to know the hefty amount that might leave you stunned!

Television diva, Mouni Roy rose to fame for her acting stint in the serial, Naagin. Later, she stepped her foot in Bollywood with the film, Gold and won everyone's hearts with her dancing skills and glamorous looks. The actress has been enjoying her marital bliss ever since she had tied the knot with the love of her life, Suraj Nambiar in January 2022.

Apart from being a glamorous actress and a doting wife, Mouni Roy is a fashionista of Bollywood. She has a unique fashion sense, and her sartorial style statement gets analysed by every fashion enthusiast. Be it at a red carpet look or a casual brunch, or a romantic dinner party, Mouni has always turned heads toward her with her gorgeous looks. On May 10, 2022, Mouni Roy was spotted in Mumbai city at her upcoming movie, Blackout's wrap party and the actress raised the fashion bar with her blingy outfit. She wore a gorgeous full-sleeved blue-coloured sequinned dress that featured a wrap skirt pattern at the waistline and a beautiful feather detailing at the hemline. She completed her look with heavy foundation, bold rimmed eyes with thick eyelashes, blushed cheeks and a nude brown lip shade. She kept her hair open. As soon as the pictures hit the social media platforms, it was Mouni's glittery outfit that had caught our attention. Upon doing some research, we found out that the dress was from the shelves of the international luxury fashion brand, Nadine Merabi's Miley Blue Dress. However, on its official website, the dress is priced at Rs. 315 euros, which after converting to Indian currency, might leave your wallet empty. In Indian currency, the dress comes with a price tag of Rs. 25,690.46. Mouni accessorised her look with a Blue Christian Dior embroidery saddle bag worth Rs. 3,01,745.21. On April 5, 2022, Mouni Roy had shared a few pictures on her Instagram handle, wherein she had looked like a princess in a sunshine yellow-coloured long tulle dress that had featured a subtle golden embroidery work all over it. She had completed her look with no accessories and minimal makeup. Mouni had kept her hair in beachy curls, side-parted. 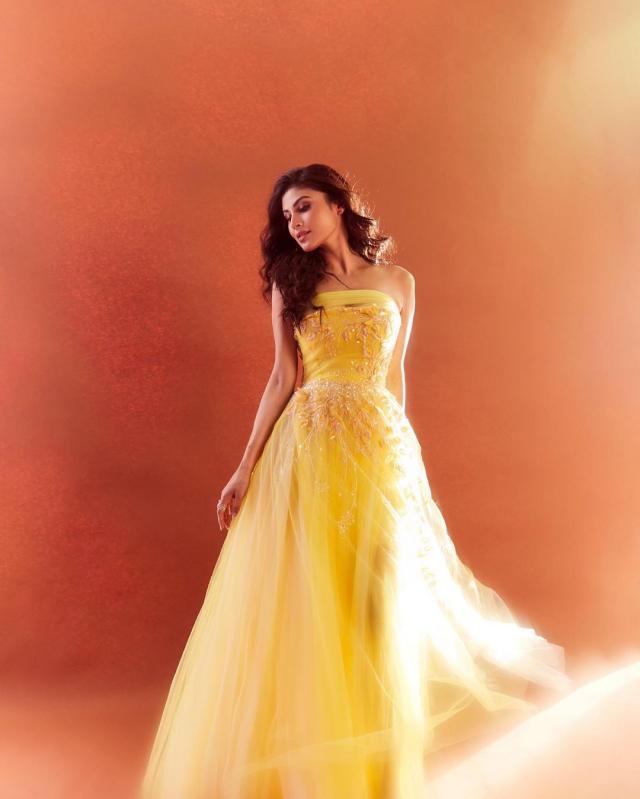 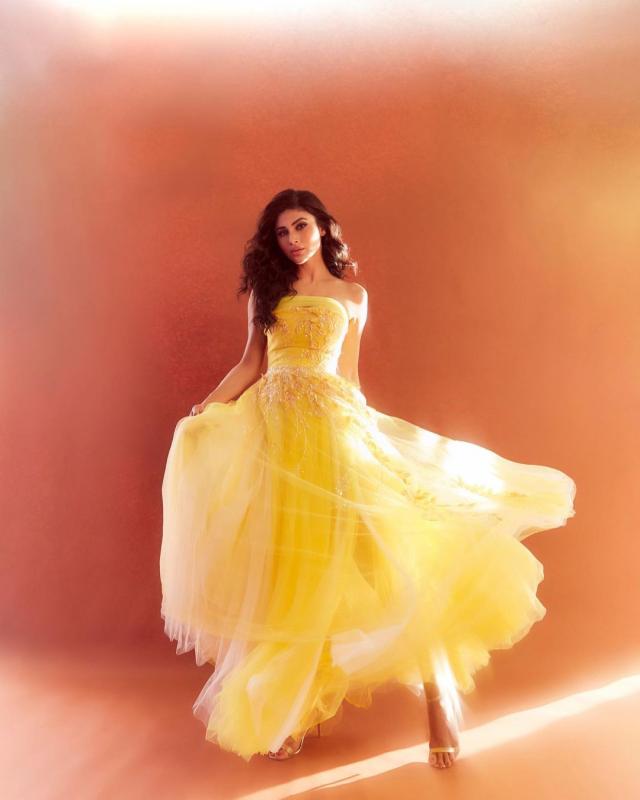 However, it was the dress that had won our hearts. After doing some research, we got to know that it was from the brand, Hanayen couture. And on its official website, the price of the beautiful dress was mentioned at 1,750 US Dollars, which after converting to Indian currency, comes at Rs. 1,32,638.

Mouni Roy never misses a chance to create a buzz around her blingy looks. What do you think? Let us know!