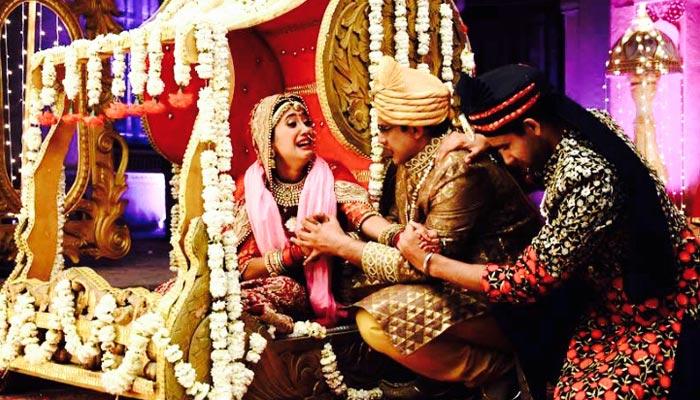 Indian weddings are all about grandeur, dance and masti. But with all these comes the vidaai ceremony. While others are having a gala time at the wedding, the bride experiences mixed emotions. On one hand, she is happy to start a new journey of her life, and on the other hand, she is very sad to leave her family behind. This moment is always brimming with emotions, and it’s hard to control them.

Recommended Read: Nostalgic Moments That Make A Bride Cry On The Happiest Day Of Her Life

So, here we have a few songs that express the feelings and emotions of the bride as well as of her parents. Scroll down and take a look!

Bidaai song from one of the most heart-touching Bollywood films, Baabul starring Rani Mukherjee and Salman Khan is an apt one for any vidaai ceremony. Right from its lyrics to its slow background music to the super-talented Richa Sharma’s voice, there is something echoing and reverberating about the song.

Hum Aapke Hain Kaun’s super-emotional number, Babul Jo Tumane Sikhaya is yet another touchy song. As it is said that every daughter is ‘Dady’s Li’l Girl’, just like that in this song the bride promises to continue doing what her father has taught her up till now. There is certainly sought of magic in this song that only a father and a daughter can understand better.

One of the famous Punjabi folk songs Madhaniyan is close to many hearts, or rather we should say each and every girl’s heart. Though a lot of covers have been made of this song, the legendary Musarrat Nazir’s original voice has some other vibes altogether. The overall crux of the song is that marriages are a relation for a lifetime.

You May Also Like: 10 Peppy Songs Which Are Perfect For The Sangeet Night

Asaan Hun Tur Jaana, Din Reh Gaye Thode, the very first line of the song is so heart-touching and totally relates to the environment during the vidaai time. The song is from the 1983 movie named, Arpan though its original version is sung by Alam Lohar, who was a prominent Punjabi folk singer. But this song was then recreated with a few modifications by Laxmikant-Pyarelal and was sung by Suresh Wadkar and Lata Mangeshkar for the movie.

Right from the lyrics to the music to the sensitivity of the song, each and everything of this melody is what vidaais are all about. On the one hand, the bride is happy to start the new phase, but it’s equally hard for her to leave her father’s place. This song from the movie Bewafa Se Wafa clearly defines how a girl is going through mixed emotions during the vidaai ceremony.

From the movie Neel Kamal (1968), it is one of those soothing songs that put light on father-daughter relationship. In the pleasant and soulful voice of the legendary Bollywood singer Mohammed Rafi, the song becomes even more expressive. What a father wishes for her daughter and her new journey of life is curated in this special song. It is one of the best vidaai song picks so far!

Don't Miss: 6 Best Bollywood Songs For The Entry Of The Bride

It has been a custom that bride and her family members cry during this ceremony, courtesy the emotional milieu. But, what if we bid her farewell with a smile on face? So, here’s the song that gives you another angle to think about vidaai ceremonies. Mehlon Ka Raja Mila song from the famous 1968 movie, Anokhi Raat has a lot to say. Mehlon ka raja mila k rani beti raj karegi, khushi kushi kardo vida k raani beti raj karegi. Amazing lines, no?

In the pleasing and poignant voice of famous Pakistani singer Shazia Manzoor, Sada Chidiyan Da Chamba Ve is one such song that’s always on the top for a vidaai ceremony. This song talks about everything from the feelings going on in a bride’s heart to the good luck and wishes from her parents. And, no one can deny the fact that the very tune of it brings tears to everyone’s eyes.

Recommended Read: The Beautiful Meaning Behind Vidaai Ceremony In Indian Weddings Will Melt Your Heart

So, these were a few best and super-emotional songs that are perfect for a vidaai ceremony. In case you want to add songs to the list, do let us know in the comments section below!