In the year 2015, we had witnessed a lot of celebrity weddings. But there’s no doubt that it was the wedding of Bollywood’s handsome and charming actor, Shahid Kapoor that took away all the headlines. Shahid Kapoor had tied the knot with his Delhi-based fiancee, Mira Rajput on July 7, 2015. Since then, Shahid and Mira are enjoying their 'happily ever after'. The adorable couple of B-Town had welcomed a little angel, Misha Kapoor on August 26, 2016, and two years later on September 07, 2018, the family of three welcomed another bundle of joy, whom they have named Zain Kapoor. (Recommended Read: Kareena Kapoor Khan Shares Son, Taimur Ali Khan's Painting, Calls Him Picaso Amid COVID-19 Lockdown)

In such a short span, Mira and Shahid had turned into doting parents and no one can question their dedication towards their children. On one side, Shahid tries his best to extract some time out of his busy shooting schedules. His wife, Mira plays both roles of a father and mother on numerous occasions for their kids. Now in this tough time, when COVID-19 is getting scarier and scarier with the dawn of every day, it’s hard to divert our mind to good things. But this is what life is all about and we have to look at the bright side, no matter how bad the situation is. And that is exactly what Mira Rajput Kapoor is doing at the moment, the doting wife posted a picture of her relaxing while her hubby, Shahid Kapoor cooked some pancakes for her in the kitchen. 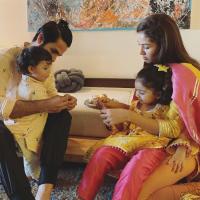 On March 28, 2020, Mira Rajput Kapoor took to her Instagram stories and uploaded a picture while relaxing on a sofa. In the picture, all we can see is Mira’s feet placed on top of a glass table and it’s her caption that tells the whole story and it can be read as “Waiting while the husband cooks me some pancakes #TheGoodLife #TablesMightTurn @ShahidKapoor.” Take a look: (Don’t Miss: Divyanka Tripathi's Hubby, Vivek Dahiya Brings His Inner-Chef Out With 'Pasta-E-Hind', Shares Video) 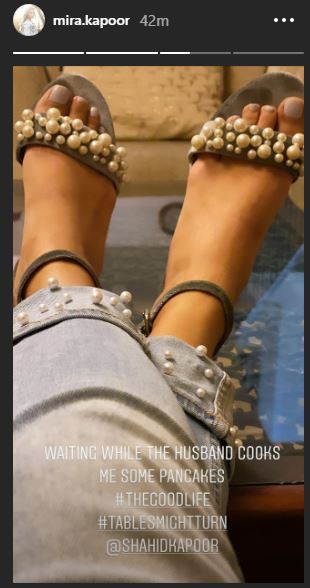 Well, this isn't the first time when we are envying Mira Rajput Kapoor for getting married to Shahid Kapoor. The actor has time and again, proved that he is the best husband in his interviews and social media PDAs. One such fine example of that is when Shahid and Mira had completed one year of togetherness and the actor had posted a beautiful photo with Mira on his Instagram handle, sharing their ‘kiss of love’ moment? Shahid had captioned it as "Happy first anniversary my love. @mira.kapoor you are my sunshine." Take a look: (Also Read: Soha Ali Khan Shares Picture With Daughter, Inaaya Naumi Keemu With A Quote That Suits The Lockdown) 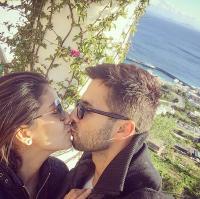 How you’re spending your self-quarantine time? Let us know!

Dear fathers-in-law, we know you are not given much credit and Ekta Kapoor has never thought twice on making a serial on you, but you still hold an important place in the life of a new bahu. It is because of your unconditional love that a daughter-in-law feels like a daughter