She had no relation to the Indian film fraternity, neither did she know that she will have one in future. Overnight, she became the talk of the town when one of the most eligible bachelors and the then chocolate boy from the films announced his wedding with her. We are talking about none other than, Shahid Kapoor’s wife, Mira Rajput. 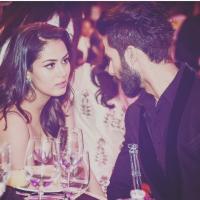 During the pregnancy phase, this petite and lean lady did gain a lot of weight. But to everyone’s surprise, she shed most of the extra flab soon after Misha was born, within 2-3 months so to say! And trust us, now she is looking like a million bucks and one amongst the yummy mummies of the B-town.

You May Also Like: 16 Post-Pregnancy Transformation Of Celebrities Who Bounced Back To Slim Original Look

The very first appearance of Mira post her pregnancy weight loss was made on Karan Johar’s Koffee With Karan couch along with her dear hubby, Shahid Kapoor. While Shahid was very much expected to be on the show, Mira’s presence was a pleasant surprise in every way.

The pretty lady came on the show almost after 3-months from the little angel, Misha’s birth (though the episode was aired in January 2017). We must tell you, Mira went through a terrific change and looked stunning on the couch in a blue gown and was glowing like never before.

In fact, Mira’s consent on coming on the talk show made Shahid so proud. Here’s what a source was quoted as saying then:

"Mira agreed to do the show just 3 months after having her baby and everyone was stunned with her transformation. While she has always been fit, she has been training hard post pregnancy and is looking better than ever. She was constantly being complimented, while Shahid lovingly looked on as a proud husband. Together they epitomised a fun, young power couple.”

Must Read: Kanchi Kaul's Post-Pregnancy Transformation Is The Most Inspirational Thing You Will See Today

…And the weight loss journey!

And then, when she attended the GQ event, she didn’t only take everyone by surprise with her first solo outing, but also with her flat tummy and petite frame. It’s has been reported that she is rigorously following her fitness routine. Not just that, she has also been eating healthy in order to attain that svelte pre-baby figure. In fact, she has been spotted quite often outside the gym.

Of late, when Mira attended a Woman’s Day event, she shared some unknown facts about her weight gain and how did she lose it. Here’s what she said:

"I think what's important is to be a healthy mother. Your child is your responsibility. You can take your time to lose that weight. But you need to come to terms with the fact that your body is going to be different for a certain amount of time and it's not permanent. After that you can set your goal and say I want to get fit."

Recently, when Mrs. Kapoor attended Radha Swami's younger's son wedding in London and shared pictures from the functions, she is just like back to her earlier physique. She posted different picture from different functions, and trust us, she is looking too fit to be believed that she is a mum to a 10-month-old baby.

Well, Mira no doubt, you have been giving some serious fitness goals to all other newbie mums who have gained weight. You have become another inspiration to many out there. More girl power to you!