Shahid Kapoor and Mira Rajput Kapoor are all set to move into their Worli home with their kids, Misha Kapoor and Zain Kapoor. Check out as Mira shared a glimpse of her living room!

Shahid Kapoor's wife, Mira Rajput Kapoor is a humble lady and a doting mother to their children, Misha Kapoor and Zain Kapoor. Mira is a perfect example of a working mom, who is managing her home, work, and her kids at the same time like a pro. Well, there's no denying the fact that Mira is an excellent homemaker, and now she's looking after the decor of her new abode as her family is all set to move into it.

On October 5, 2021, Mira Rajput Kapoor had shared a glimpse of their new abode, which was under construction. On her IG stories, she had shared a picture of her husband, Shahid Kapoor, dressed in his casual outfit and instructing their interior designer, Annkur Khosla, something about their house. The two were seen standing on the artistic stairs and sharing their picture, Mira had written:

“@annkur.khosla one step at a time.” 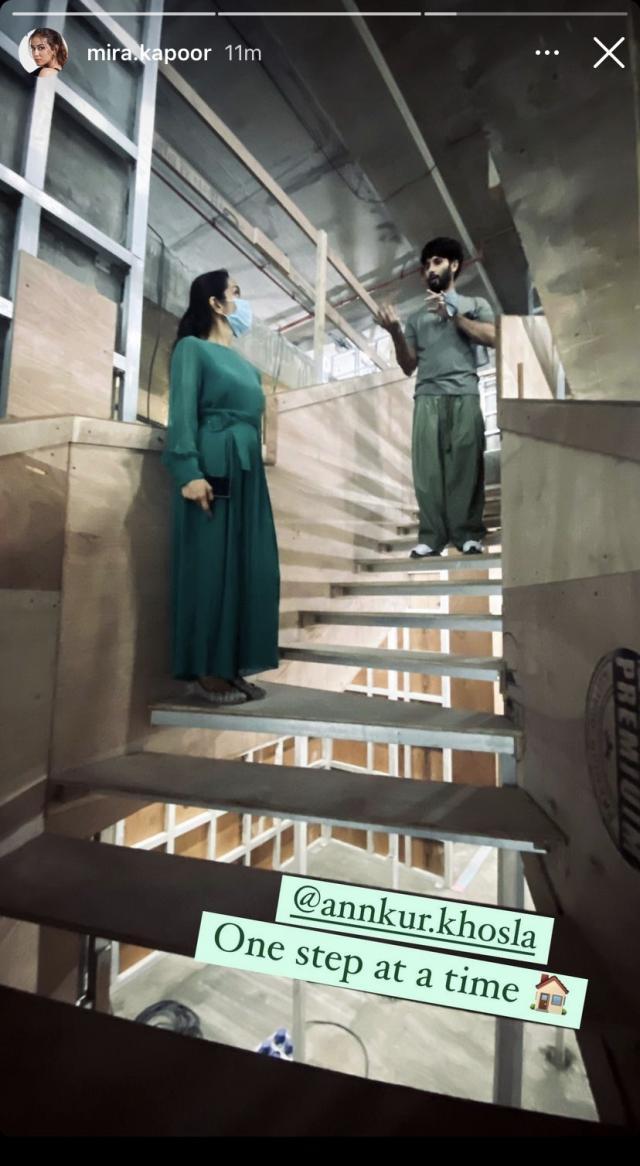 A few moments back, taking to her IG handle, Mira Rajput Kapoor shared a glimpse of her new home on her IG stories. In the photo, we can see a well-lit room, which featured a neutral-hued sofa, a coffee table, a lamp, some plants and a beautiful painting hanging on the wall. Looking at the entire area, it looked like the picture was of the living room of Mira Kapoor's new house. Sharing the picture, atop it, Mira penned:

"How to build a home away from home on zoom @annkur.khosla. Onto the next!"

On January 14, 2022, Mira Rajput had taken to her IG handle and had dropped two pictures on her IG story. Sharing the pictures, Mira had asked her fans to send suggestions for planning space allocation for her kitchen in her new home. Mira had shared that she wants a masala/tadka friendly kitchen and had also mentioned some of the organisational tips given to her by her friends. Atop one of the pictures, Mira had penned:

On January 13, 2022, Mira had taken to her Instagram handle and had reshared her designer's IG story. In the video, we could see a glimpse of her home under construction. However, the view outside of their home had won our hearts. Sharing the IG story, Mira had written:

"Not much longer to go. Tick Tick Boom." For the unversed, Shahid Kapoor and Mira Rajput Kapoor's new home is located in the plush area of Worli, Mumbai. Their duplex, on the 42nd and 43rd floors of Tower B of Three Sixty West, costs a whopping amount of Rs. 55.60 crores. In August 2019, there were reports that Shahid and Mira’s Worli home was ready for them to move in. However, owing to the pandemic, the couple couldn't move into their new home, and the surge in COVID-19 cases had delayed their plans. Now, the couple is ready to shift to their new abode with their kids. We cannot wait to see glimpses of Shahid and Mira's new home!

Don't miss: Rajkummar Rao Breaks His Silence On Getting Trolled For Posting A Mirror-Selfie Of Wife, Patralekhaa