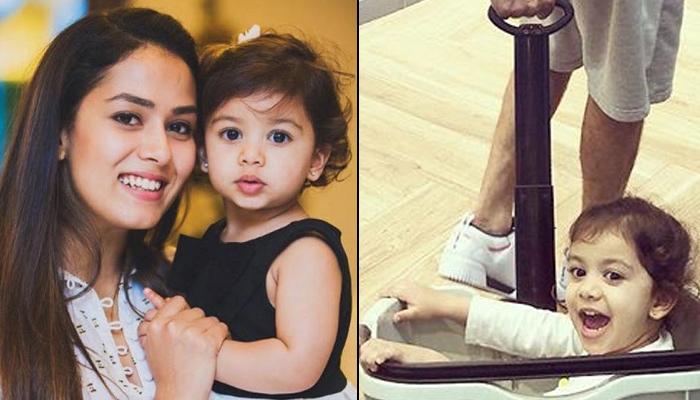 A little over two-year-old, we have literally seen this super-cute angel grow up from a little ball of mush to a smiling, walking toddler, courtesy her star parents who frequently treat their fans with super-adorable pictures of her. Shahid Kapoor and Mira Rajput Kapoor’s daughter, Misha Kapoor has the perfect blend of style and attitude in her genes and she steals the limelight from her star family like how! The Kapoor family leaves no stone unturned to pamper their little angel and is undoubtedly the centre of their universe. (Also Read: Shahid Kapoor Takes Daughter Misha Out On A Bike Ride, He Can't Stop Looking At Her Innocent Face)

From Shahid taking his darling angel for ‘baby’s day out’ and Mira pouting with her little one on a ‘lunch date’, Misha is enjoying the perks of being the first child in the Kapoor household. On February 7, 2019, Mira posted two Instagram stories wherein she shared pictures of Misha flaunting her new ‘temporary’ hair colour. Mira had written, “Got a hair colour at Alim Uncle’s”, “I’m not a regular mom, I’m a cool mom” atop one photo and “Relax guys, it’s just temporary. Wait till I’m 5.” on another one!

Mira Rajput Kapoor also shared another Instagram post with Shahid and Misha from a supermarket. She captioned the picture as, “Fresh produce!! Which aisle stocks these sweet treats? #organic #sustainablysourced #handmade”.

Mira Rajput Kapoor has been sharing her little one, Misha Kapoor’s ‘swag’ pictures on her social media handles. A few months back, Mira treated her fans with, not one but two ‘full of swag’ pictures of her little one, Misha. While in one snap, Misha is killing her OOTD by sporting a stylish pair of sunglasses and posing with it like a total pro! Mommy Mira captioned the following picture as, "When missy picks out her outfit #ootd".

Mira put up an Instagram story wherein little Misha, dressed in a sleeveless strap frock, was seen walking into a store (perhaps). With sunglasses perfectly perched on her head and walking in a pair of golden sandals, Misha had an assured look on her face which glides in like a diva. Mira wrote, "Earlier today... too much swag" atop of it. (Also Read: Shahid Kapoor Takes Daughter Misha Kapoor On 'Baby's Day Out' Sans Mira Kapoor And Zain Kapoor)

Misha Kapoor, who is now a ‘big sister’ to baby brother, Zain Kapoor, is enjoying her time playing around with him. Before we give a glimpse of Misha adoring her baby brother, Zain, let us share how her parents prepared her for the little sibling in her life. In a recent questionnaire session on Instagram, when Mira was asked ‘How did you prepare Misha for a sibling?’ by a user and she gave a hands-on answer.

Revealing all the secrets and which song Misha sings for her baby brother, the doting mommy shared, “We spoke to her about it a lot. Read a lot of story books to her (Topsy and Tim and the New Baby became a favourite of hers), and let her feel a part of the process even till now! Help around, bring mom a glass of water or sing wheels on the bus to Zain if he’s crying. We let her feel the baby is hers to take care of so she felt like a grown-up little helper.” Checkout the same here:

In October 2018, Mira treated her fans with a picture of their two little munchkins, Misha and Zain in one frame together. Mira posted an Insta story of 'big sister', Misha standing by her baby brother, Zain's crib and the two are sharing their own lovely moment together. This capture will surely leave you with a smile on your face.

In an interview after Zain’s birth, Shahid Kapoor’s mother, Neelima Azeem revealed how ‘big sister’ Misha reacted to the arrival of her little sibling. Neelima ji had stated, "It is definitely a sweet and exciting part in her life. Now, she has got a brother and a companion. Misha is basically a very soft and tender child. She is full of energy and fun, there is a lot of sweetness in her. Even when she goes to the beach, she will play with the puppies and babies there.. she is like that with everyone and now it is her own brother. But, of course, it is a little emotional adjustment for all the children so that will happen. But I think her parents are handling that very beautifully. They are balancing the act nicely. All the credit goes to Mira and Shahid." (Also Read: Shahid Kapoor Learns How To Pout Thanks To His Little Daughter Misha Kapoor, And You Cannot Miss It)

Did you like Misha Kapoor’s ‘temporary’ hair colour? Keep us posted!

The ‘Delhi based girl’, Mira Rajput had married Bollywood actor, Shahid Kapoor on July 7, 2015, and had entered into the lives of his million fans. Over the years, she has proved that she is not just a fabulous Bollywood wife and won our hearts with her humble nature and