Ishaan Khatter turned 24 today (November 01, 2019) and his family members posted heartfelt wishes for him. It was his adorable exchange of messages with Mira Rajput Kapoor that made us go all 'awww'!

No matter how old are you or how far you’ve come in life, you’ll never be too old for your parents, or for that matter, your family members! Your birthday, apart from all the celebrations that await, is a gentle reminder of how grateful they are for having you in their lives. And when it comes to celeb birthdays, as much as happy we are as they enter a whole new year of life, we are even more excited to see who wished them and share tidbits about them, with you. And as Bollywood's heartthrob, Ishaan Khatter turns 24 today (November 01, 2019), let’s take a look at who wished him on his special day and how! (Do Read: Abhishek Bachchan's Wish For Wife, Aishwarya Rai Is Filled With Love, Calls Her 'Principessa')

But as they say, good things take time and before you proceed further to take a note of who wished Ishaan Khatter on his birthday, let’s a take a peek at how his life has fared in the past year. Ishaan had made his Bollywood debut with Beyond The Clouds in 2017 and immediately rose to fame. However, it was on July 2018 when his second film, (first one for Janhvi Kapoor) Dhadak that had catapulted him to massive success. While Ishaan is definitely climbing the ladder with a great choice of films, it is his ‘close camaraderie’ with Janhvi that never keeps him out of the spotlight. While that was all about the past year of Ishaan Khatter in a nutshell, the actor turned 24 today and his family members posted heartfelt wishes for the birthday boy. Mommy, Neliima Azeem took to Instagram and posted a picture of a cup which had the words “Happy Birthday Ishaan, May all your wishes come true” written on it with “Happy happy my darling son” as the caption. Daddy, Rajesh Khatter posted a collage of some adorable daddy-son throwback and current moments, alongside which he penned, “Does time fly .. seems it does... Happy Birthday @ishaankhatter.wishing you the world & more son. Stay Blessed & Keep Shining #ishaankhattar.” Ishaan's step-mom, Vandana Sajnani Khattar too shared an 'awww-dorable' picture with her and wrote, "A memorable picture with this wonderful boy #Happybirthday @ishaankhatter Stay blessed, stay happy always #Ishaankhattar #Birthdayboy." Ishaan Khatter’s bhabhi, Mira Rajput Kapoor too took to her Instagram stories and posted two mesmerising pictures of Ishaan, from what looked like a dance session photoshoot of the actor. While the first picture had Ishaan in a sufi dance pose and Mira writing the words “Saying hello to a New Year like…” atop the picture, the second one was a dapper picture of the birthday boy. The second story of Mira had Ishaan in it with the words “Happy happy birthday not-so-little-brother” with a love emoji and “Stay mad, stay crazy and keep clicking the best pictures of me”, beneath his photograph. Ishaan reposted the same story on his Instagram handle with the words “Love You” on it! Also checkout how Shahid Kapoor wished his brother via Instagram: (Must Read: Akshay Kumar Goes Out For A Walk With His Daughter, Nitara, But The Duo Gets A Valuable Life Lesson) 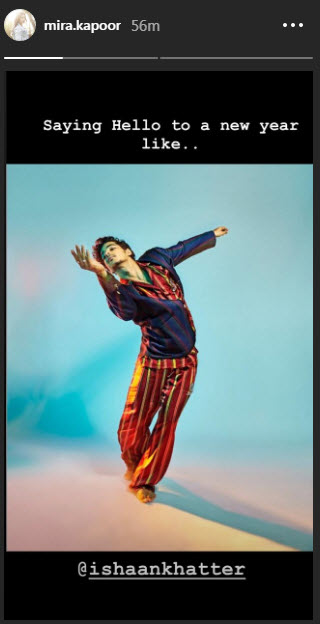 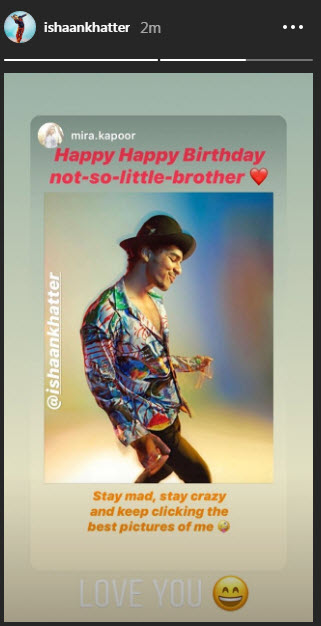 On last year’s birthday, Ishaan Khatter had chosen to celebrate his ‘big day’ with his star family, half-brother and sister-in-law, Shahid Kapoor and Mira Rajput Kapoor and ‘close friend’-cum-co-star, Janhvi Kapoor. A glimpse of the birthday boy captured by Mira had Ishaan going gaga over his birthday cake was enough to make our day! While you checkout the video here, we hope that we can share something similar with you this year too!

A little about Ishaan Khatter’s personal life, he is the son of Neliima Azeem and Don star, Rajesh Khatter. In an interview with Pinkvilla last year, Rajesh had spoken about planning a surprise birthday bash for his son, Ishaan and had stated, “I was out of the country and I landed up last night pretty late. Since morning I am shooting, we are planning to meet up in the evening. He is watching MAMI films in the morning. In the evening, we are planning a little surprise for him. He doesn’t like big shoo-shaa. He likes it very private and simple. What do I wish for him? I wish the world for him and every father would do that. I wish him all the happiness and I would want him to spread that happiness around him, joy and keep everyone joyful too. I wish God gives everything he desires for and more. What does one want more than this.” 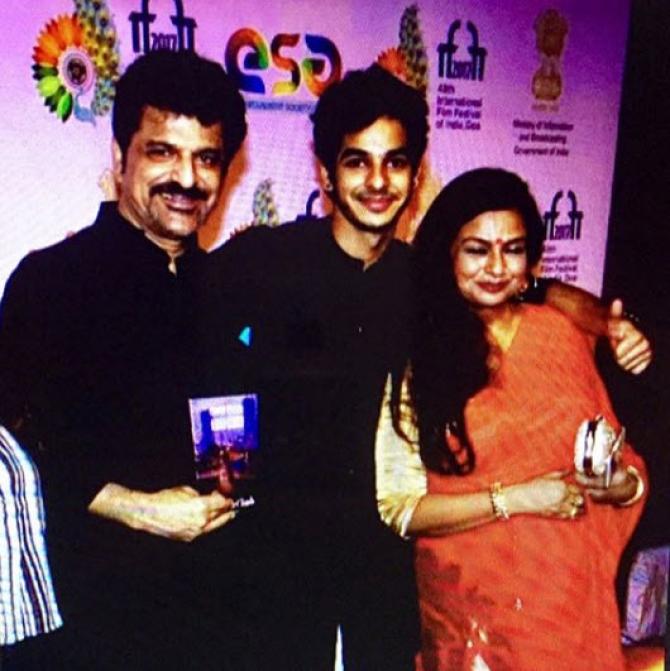 In a 2018 interview with the Bombay Times, Ishaan Khatter had bared it all out about his mom, Neliima Azeem and the sacrifices that she had made, given that she had gone through two broken marriages. Ishaan had stated, “She would often put her own feelings in the back seat to take care of others. That’s an act of selflessness. For many years, I saw her go through emotional strain and difficulties. She had more on her plate than she could deal with while taking care of us. I often saw her go through changes in her personality. She is a lovely person, that’s why it’s important for me to give her all the comfort, happiness and satisfaction I can. I have great admiration for her.” (Also Read: Taimur Ali Khan Wears A T-Shirt Worth Rs 400 But His Cowboy Shoes Are Way Costlier Than His Outfit) 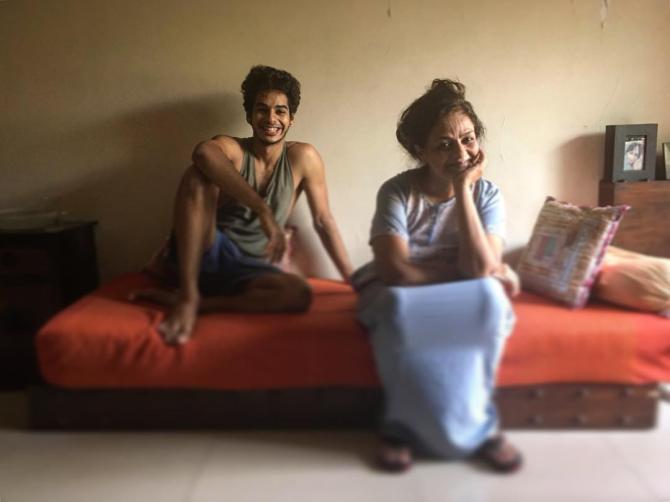