Becoming a mother is one of the most phenomenal experiences a woman has in her life. That feeling of carrying a life within you is a feeling which is beyond the power of words for expression. It can only be felt.

We, humans, have a tendency to preserve and archive all the beautiful moments of our lives so that we can look and relive them time and again. Pregnancy is one of the most memorable times in a woman's life and gone are times when women used to hide their baby bumps! And why should they anyway? Embracing motherhood by flaunting the baby bump has become a mainstream trend now and maternity fashion has taken a top-notch. Don't believe us? Here are some of the very stylish moms of Bollywood, who redefined fashion with their stunning maternity pictures. 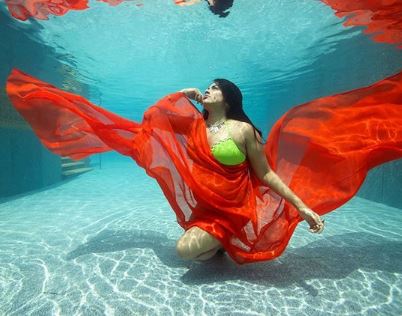 When Sameera Reddy was pregnant with her second child, she took the whole maternity photoshoot game to another level by opting for an underwater shoot. Her sizzling pictures in lime coloured bikini and orange flowing dupatta reminded us of Princess Ariel for once. In the throwback pictures, that Sameera shared, the actress looked so radiant, it was as if you could actually see the glow of motherhood within her. She even put a beautiful caption which said, "Respect your body in any size. Calm Mama = Happy Mama" (Recommended Read: Pregnancy Fashion: Take Tips From These Celebrity Divas To Look Stylish During Pregnancy) 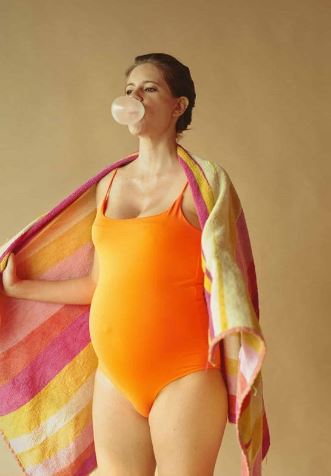 One of the most talented actresses of the industry Kalki Koechlin had donned a yellow monokini for her first pregnancy photoshoot in which she could be seen blowing a chewing gum and we just can't take our eyes off the beautiful picture. Kalki shared the news of her pregnancy by posting this picture along with a caption which could be read as, "Blowing up like a balloon of anticipation coloured by YouTube videos of birth stories, Birth Centre updates, a long list of heavy books, the endless advice of mothers who know better and the black hole of Whatsapp spamming from various sources as I wait for my own version of this age-old story to unfold." Indeed a very apt description of motherhood. 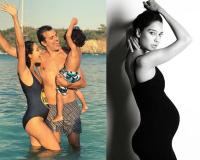 Lisa Hayden had taken to her Instagram handle to announce her second pregnancy with a picture of herself along with her husband and son, flaunting her baby bump with the caption, "Party of four on the way!" Her black and white photos of her pregnant being take our breath away for once as her resplendent self glows from within. Lisa has shared a lot of pictures on her Instagram flaunting her baby bump and it would not be an understatement to say that she might be the hottest mom out there! (Suggested Read: 6 Famous Celeb Couples Who Announced Pregnancy A Little 'Hatke' From Others) 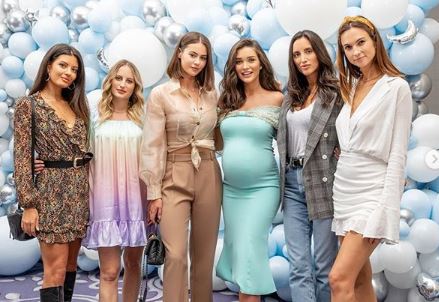 Bollywood actress, Amy Jackson wore an aqua blue off-shoulder gown for her baby shower and the pictures very beautifully capture the essence of motherhood. Amy posted the pictures of her baby shower on her Instagram with the caption, "The Baby Shower of Dreams. The most beautiful afternoon celebrating my Baby Boy with best friends and family. He’s one lucky boy to have so many amazing women in his life." Amy had looked nothing less than a princess from Disney world in her elegant gown. 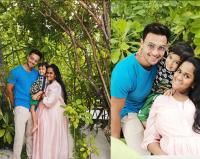 Arpita khan's sweet little munchkin was born on mamu, Salman Khan's 54th birthday! Arpita and Salman share a very special bond and to respect that, Arpita had decided to make Salman's birthday her delivery date while pregnant for the second time. She had taken to her Instagram handle to share her amazing pictures along with her husband and son announcing her second pregnancy. She wrote a loving caption which could be read as, "The most important thing in the world is family & love” (You May Also Like: 16 Post-Pregnancy Transformation Of Celebrities Who Bounced Back To Slim Original Look)

#6. Smriti Takes The Morning Selfie Game To A Top Notch

Meri Aashiqui Tum Se Hi fame, TV actress and former model, Smriti Khanna is expecting her first child and she looks super cute in the morning selfies she had posted on her Instagram handle. Smriti, who is 9-months-pregnant, had shared a morning selfie on Instagram with the caption, "Hi Golu!#9monthspregnant #almostthere #babybump #readytopop." In the pictures, she was looking adorable as she reeks of happiness, motherhood brings along. 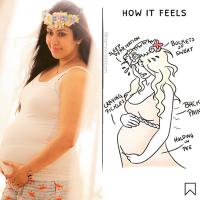 Ye hai Mohhabatein fame, Karan Patel and wife, Ankita Bhargava have recently become parents to a cute little daughter and we're in awe of the beautiful pictures of the family. Ankita had shared a funny, yet a meaningful picture of her pregnant self on her Instagram handle and we feel it's something every pregnant woman out there needs to see. She was looking gorgeous which she was donning in the picture. 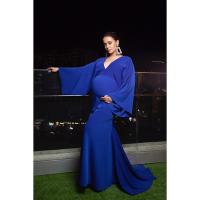 Hiding baby bump is a long-forgotten convention. It's now time to bare it all and TV actress, Surveen Chawala had looked effortlessly elegant in a royal blue, deep neck bell-sleeved gown, she donned had for Nykaa Femia Beauty Awards 2019. She had posted a picture of her heavily pregnant self with the caption, "Electric yet Simplistic but Dramatic still Romantic...Magnetic is Characteristic when it’s Minimalistic though Artistic." Her picture was definitely a delight to our eyes. Also Read: Pregnancy Symptoms: 9 Early Signs That You May Be Pregnant 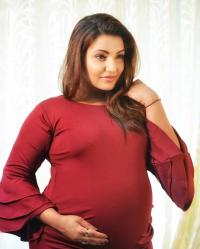 Mile Jab Hum Tum Fame TV actress, Navina Bole, who was last seen in Ishqbaaz, has been blessed with a baby girl. Navina's stylish maternity pictures have all our attention for all the right reasons. She had sported a maroon ruffled gown and looked stylish despite being heavily pregnant. She had posted the beautiful picture on her Instagram with the caption, "Change is the only constant and when one knows that change is gonna turn one’s life upside down in the most beautiful way one can just smile in anticipation and absolute gratitude." She sure is one of the most stylish mothers out there.

These strong women have influenced all the mommies-to-be by their elegant maternity pictures which have dignified the essence of motherhood like never before! More power to all mothers-to-be out there!