Television actor, Anupam Shyam passed away on August 8, 2021, and celebrities and fans are paying their tributes and remembering his character, 'Thakur Sajjan Singh' in 'Mann Kee Awaaz Pratigya'.

Veteran actor, Anupam Shyam died on August 8, 2021, at the age of 63 due to multiple organ failure, and the devastating news stunned the entire entertainment industry. From celebrities to fans, everyone is posting their heartfelt tributes online. The actor hailed from Pratapgarh, Uttar Pradesh, learned the craft of acting from Bhartendu Academy of Dramatic Arts, Lucknow, where he had studied from 1983 to 1985.

Anupam Shyam mostly played villainous roles in his career, and many elite critics labelled him as one of the greatest and fearsome villains of the television world. The actor had garnered immense fame after playing the character, 'Thakur Sajjan Singh' in the popular show, Mann Kee Awaaz Pratigya. However, Anupam Shyam had also worked in many big films in Bollywood. From working with mega-stars in movies like Shakti: The Power, Bandit Queen, Dil Se…, Wanted, and Halla Bol to acclaimed international film, Slumdog Millionaire, Anupam Shyam was a prominent name in the Indian film industry.

Anuradha Paudwal's Son, Aditya Paudwal Dies At 35 Due To Kidney Failure [Details Inside] 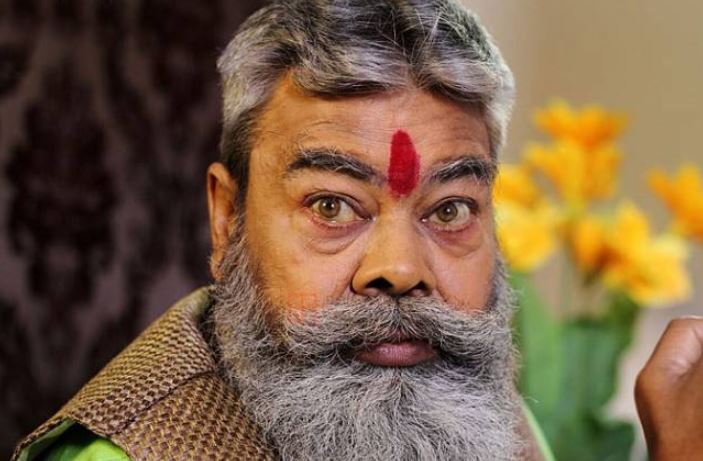 In an interview with the Indian Express, Anupam Shyam's close family friend and actor, Yashpal Sharma, revealed that the actor passed away at the age of 63 at Lifeline Hospital in Goregoan, Mumbai. Revealing the reason behind Anupam Shyam's death, the actor said that his friend died due to multiple organ failure. Yashpal Sharma said, "I just returned home from the hospital. The doctors informed us he died due to multiple organ failure. His body will be brought to his residence, New Dindoshi, MHADA colony, at 5-6 in the morning, followed by the funeral later during the day around 11:30-12 PM." 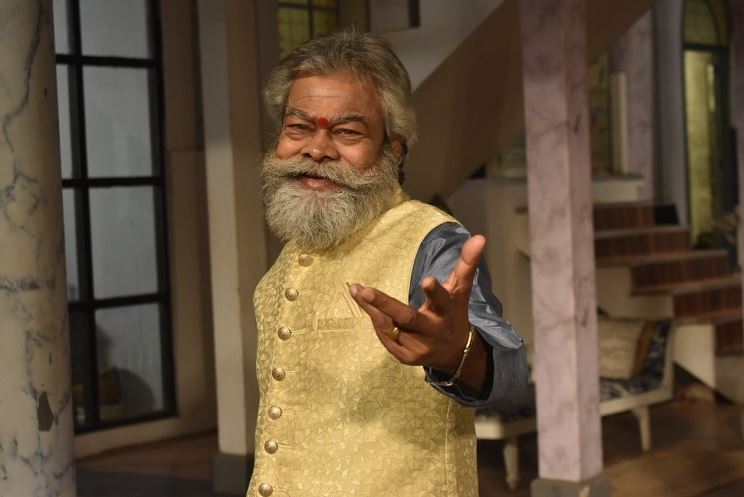 The veteran actor, Anupam Shyam was suffering from a kidney ailment for some years now, and it was only last year when he had faced a huge medical scare. After which, his brother had to appeal for some financial aid from the public. Things had gone well at that time, Anupam Shyam had also joined the cast of Mann Kee Awaaz Pratigya 2 with sheer excitement to play his favourite character, 'Thakur Sajjan Singh'. But as they say, all great things come to an end, the supremely talented actor is gone forever, and now we have to live with his memories. 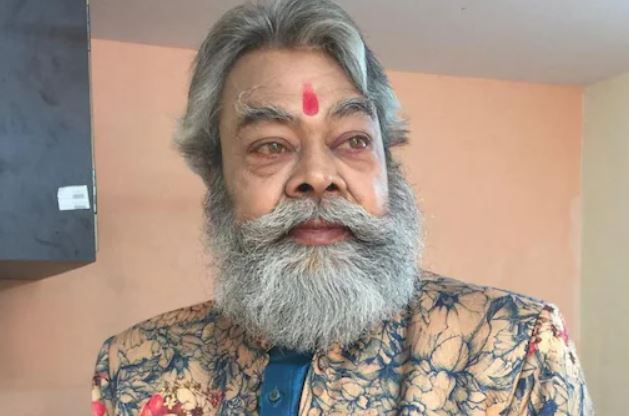 Soon after Anupam Shyam's demise, celebrities, Uttar Pradesh's Chief Minister, Yogi Adityanath, and fans started paying their emotional tributes on the internet. While some talked about his acting skills, some shared their immense disbelief in this sad reality. But one thing that was common among all the messages was sheer respect and love for the actor, who had entertained the whole nation for many years with his exceptional acting. No wonder watching the second season of Mann Kee Awaaz Pratigya without Anupam Shyam is going to be a task for the massive fanbase of this show across India. 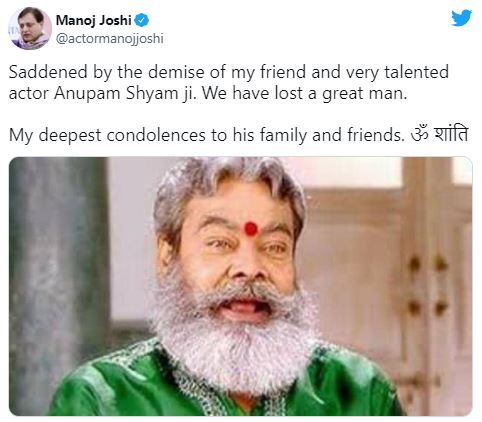 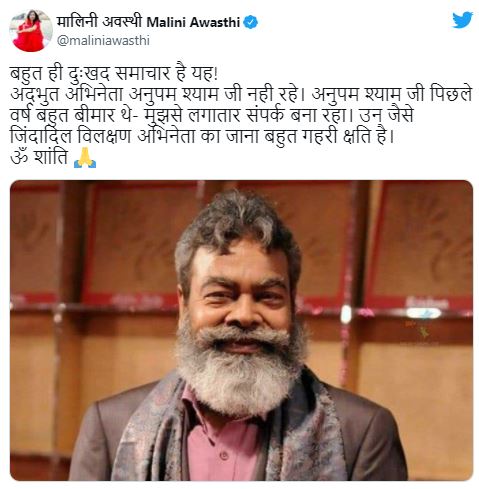 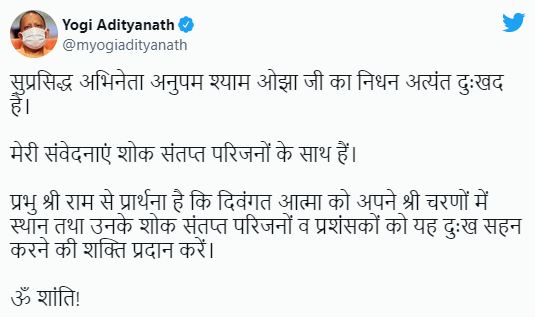 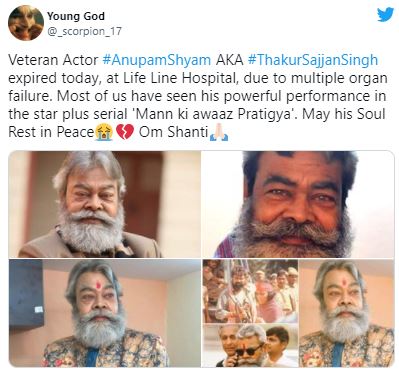 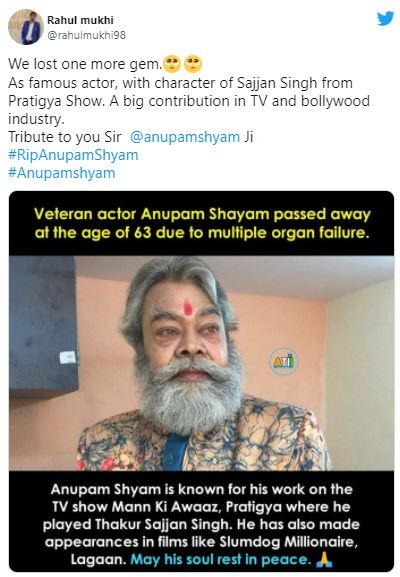 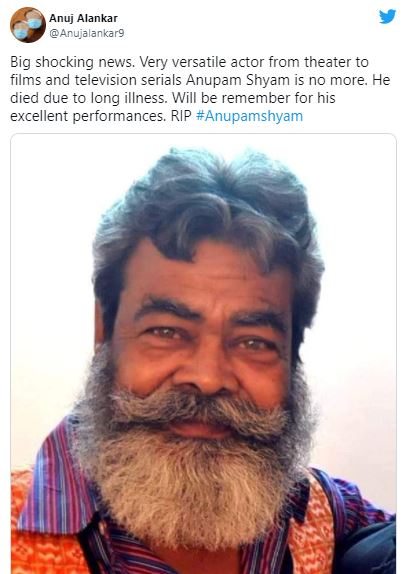 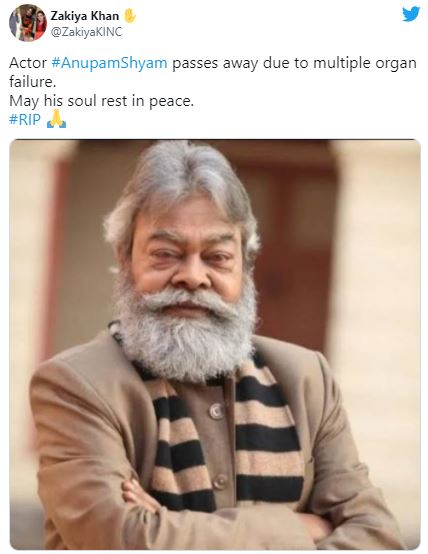