Ace fashion designer, Manish Malhotra and popular film producer, Karan Johar's dating rumours have made it into the headlines every now and then. However, do you know, once Manish's sweet birthday wish for Karan sparked their dating rumours? Find out!

Popular fashion designer, Manish Malhotra is one of the biggest names in the Indian fashion industry. Over the years, he has transformed the way Indians used to approach fashion in their lives. In the past three decades, he has won numerous awards and titles for his massive contribution to the fashion industry. While on the professional front, Manish has achieved a lot of success and fame, it is his personal life that he rarely talks about in the media. However, the only time tongues set wagging about Manish's relationship status is the time when he shares a picture or is spotted with his close friend and producer, Karan Johar.

Although Karan Johar and Manish Malhotra have time and again clarified in the media that they're just friends and nothing more than that. However, the way they greet, comment on each other's posts on social media, and all the love and care that they shower on each other, people find it difficult to digest that they're just 'good friends'. 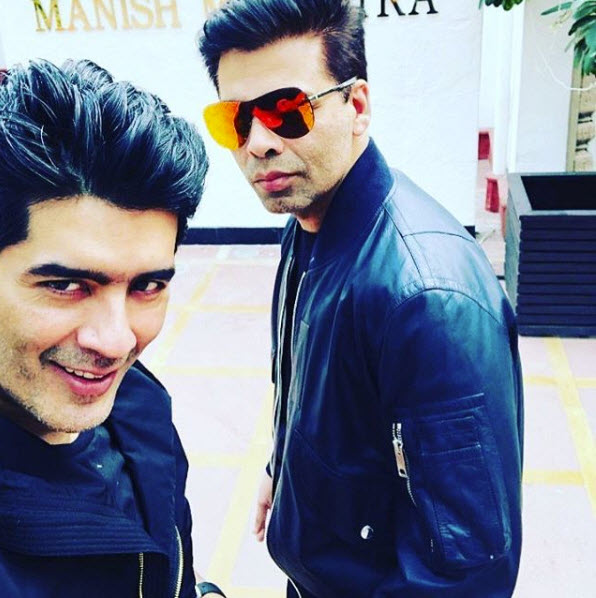 Famous producer, Karan Johar and his close friend, Manish Malhotra's dating rumours had kick-started back in 2018 when the former had turned a year older. It was on May 25, 2018, when Karan had turned 46, and on his special day, his BFF, Manish had taken to his Instagram handle and had shared a lovely picture with him. In the picture, the duo had looked handsome, but it was the heart-melting note in the caption that had caught everyone's attention. 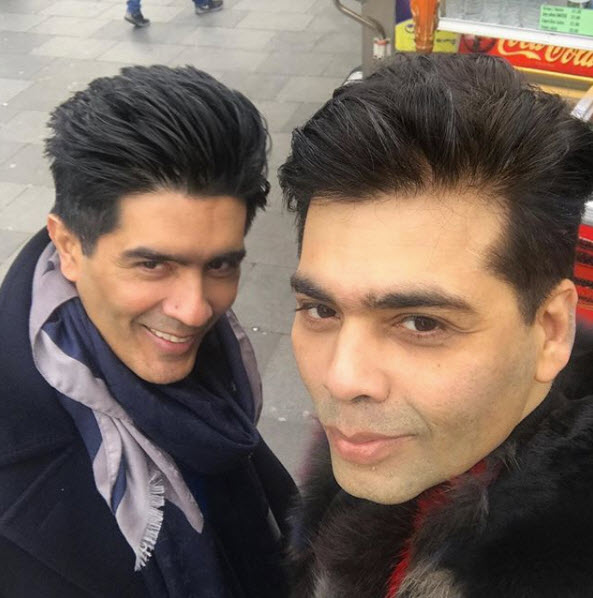 In his birthday note, Manish Malhotra had praised his BFF, Karan Johar, for always being on his side and supporting him in his career. Back then, the ace designer had also revealed that they had been friends for the last 25 years. The note was soon all over the internet, and people had started speculating about their relationship. Despite all the attention and speculations about them being in a relationship, Karan had dropped a sweet comment on Manish's post and it could be read as "Manish!!! Love you much!!! To many decades of all", followed by a series of pink-hearted emoticons. Coming back to Manish's note for Karan, it could be read as:

"Happy happy birthday my dearest bestest friend @karanjohar have a wonderful year ahead. 25 years of friendship and working together..and many more years to come and may you keep making the most wonderful films and keep being the spirited person that you are #karanjohar #friendship #friendslikefamily #Bff @mmalhotraworld." 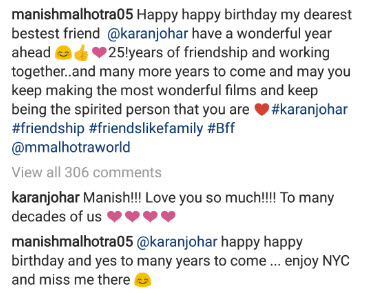 It was Karan Johar and Manish Mahotra's PDA that had gone viral on social media back in that time and was responsible for the emergence of their dating reports in the media. But, another thing that had caught everyone's attention was a user's comment, who referred to them as a 'perfect couple', and it was Manish, who had liked that comment, which had further ignited his and Karan's dating rumours even more.

Who is Karan Johar dating? Karan Johar never opened up about his personal life in the media and he had rarely talked about his lovelife. However, he had once admitted that there was a time when he was in love with Twinkle Khanna and had also revealed that she was the only girl he had loved. When Twinkle was asked to react to it, the actress had joked about having a moustache, referring to Karan's likeness to her. 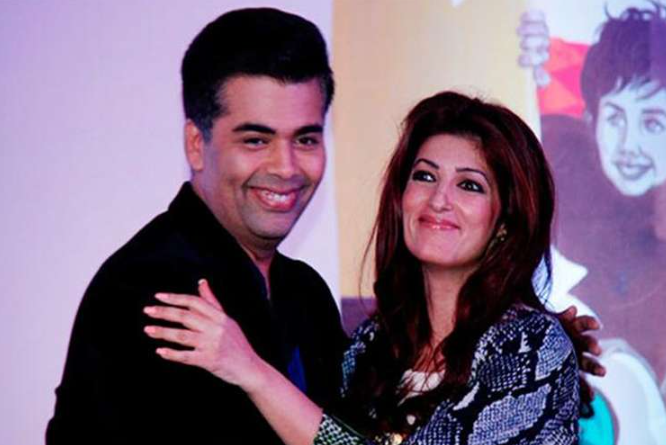 The gorgeous actress, Twinkle Khanna had hinted towards the speculations that Karan Johar is gay. However, the producer had never confirmed the reports suggesting that he's gay, as Karan had always preferred to avoid the question about his sexuality.

Recommended Read: When Alia Bhatt Admitted She Would Get Married Because Of Babies, Talked About Becoming A Mother 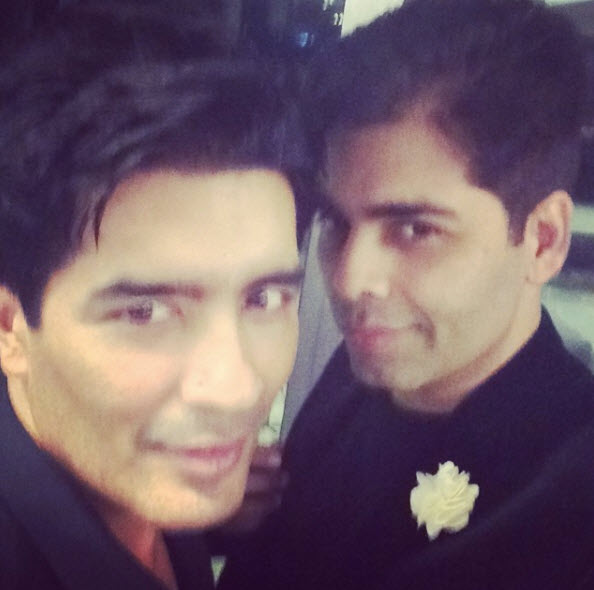 If the reports are to be believed, Karan Johar and Manish Malhotra had worked together for the first time in the former's directorial debut, Kuch Kuch Hota Hai. While working together, Karan and Manish had become close friends and soon they had reportedly developed feelings for each other. Back in those times, reports were rife that Karan and Manish were reportedly living in the same room in London. Soon they had started appearing in events together but neither of them had ever accepted their alleged love for each other. Years passed and neither Manish nor Karan had found someone in their respective lives that had also increased the speculations that they were in a steady relationship all this time. However, despite what the world is saying, Karan and Manish still spend so much time together and it was on June 29, 2022, when they were spotted in London with the actress, Alia Bhatt. 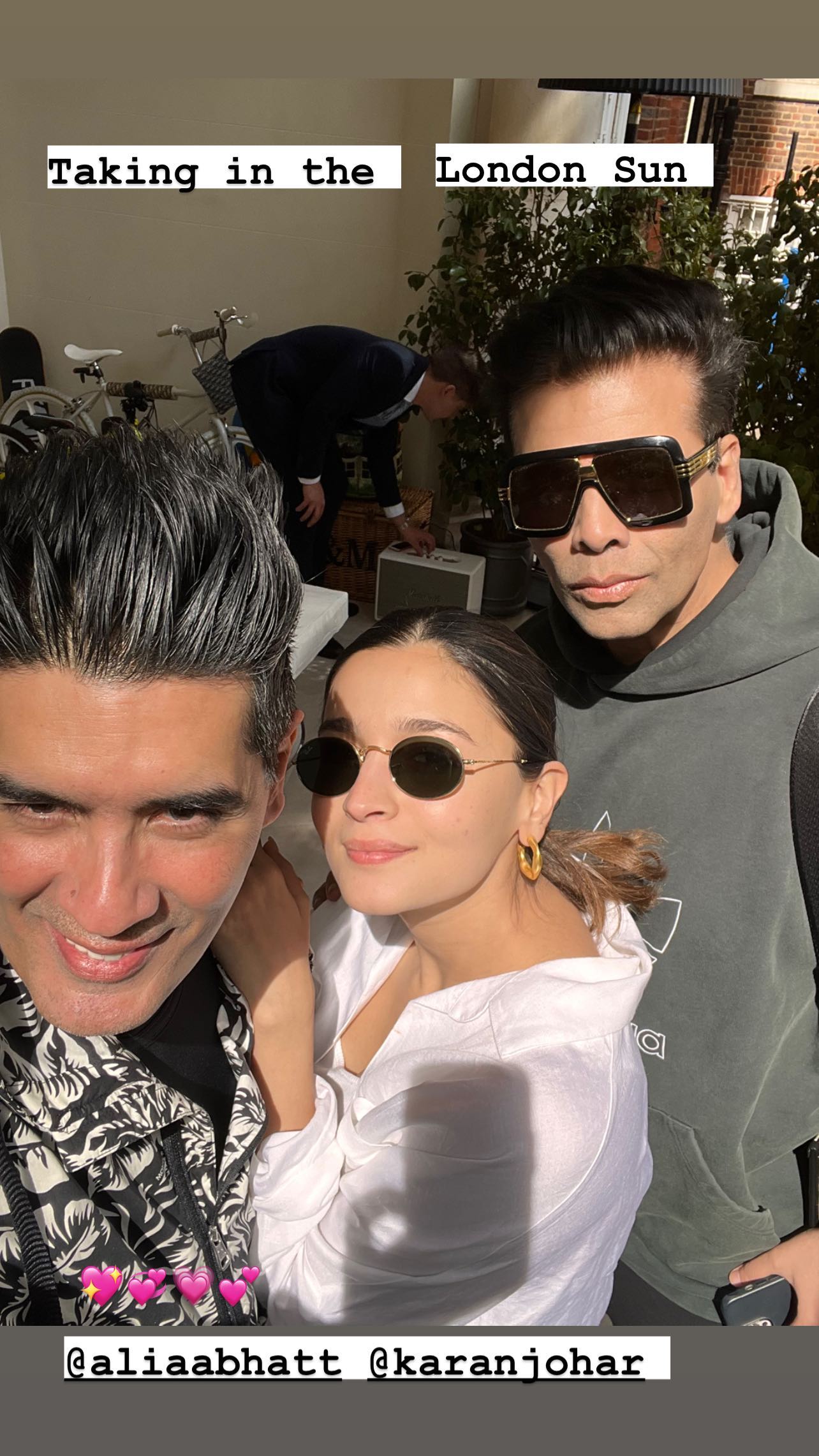 Soon after this picture was posted on Instagram stories by Manish Malhotra, a wave of media reports suggesting that he is in a relationship with Karan Johar had surfaced on the internet.

The truth behind Karan Johar and Manish Malhotra's relationship reports 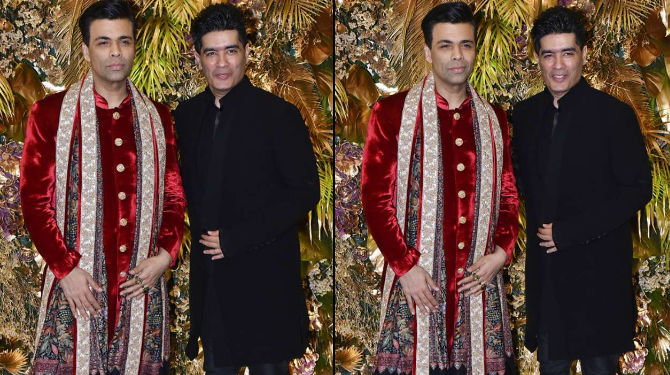 For so many years, there were rumours about Manish Malhotra and Karan Johar being a couple as the two were often spotted partying with their gang of friends. The two have never opened up about their sexuality in public, but Karan Johar has always been addressing it indirectly. He even wrote about it in his autobiography, An Unsuitable Boy.

Don't Miss: When Karisma Kapoor Revealed How Her Ex-Husband Sunjay Kapur Tried To Auction Her On Their Honeymoon 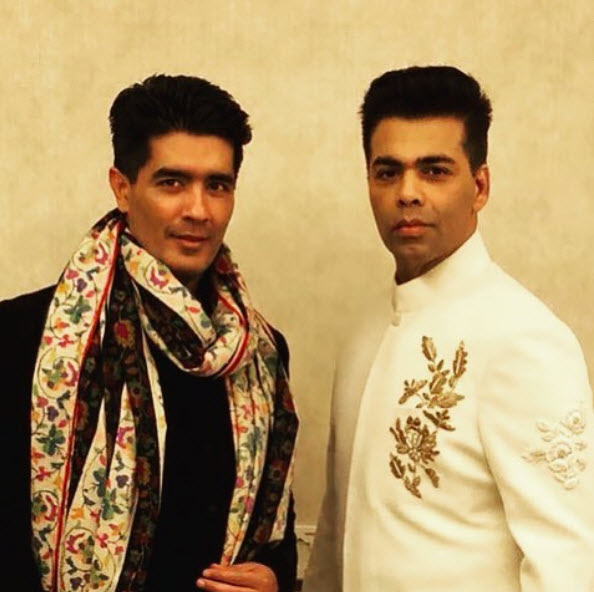 However, once in a throwback interview with a leading news portal, Manish Malhotra was asked about his lovely birthday wish for his friend and producer, Karan Johar on his 46th birthday. Answering this, Manish had explained that it was a normal birthday wish. However, when the designer was asked directly about his dating rumours with Karan, he had gotten furious and Manish had clearly rubbished the reports. Manish had strongly dismissed the idea of dating his friend, Karan, as he had stated that he is like a brother to him. Manish had said:

"Karan is like a brother to me. It's just ridiculous." 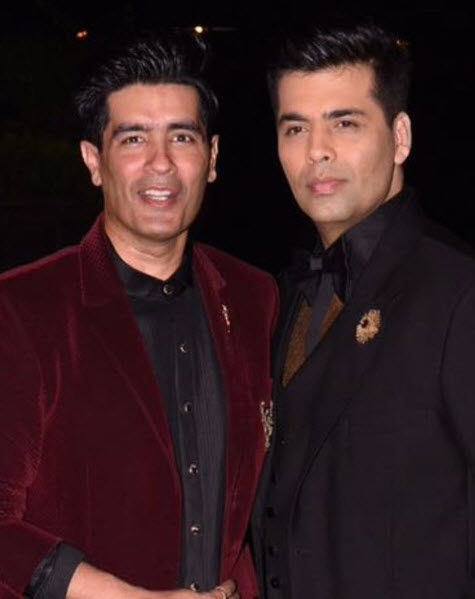 Even to this very day, it's still unclear whether Karan Johar and Manish Malhotra are in a relationship or not. However, while on one side, the rumours of them travelling and partying together keeps on coming, on the other side, the duo keeps telling everyone that they're just 'good friends'. What do you think about their dating reports? Let us know!

Next Read: When Akshay Kumar Addressed Rumours Of Him Being In A Gay Relationship With Saif Ali Khan