Mandira Bedi is enjoying every moment of her motherhood with the arrival of Tara. She shared a beautiful picture of her ‘boo’. Take a look! 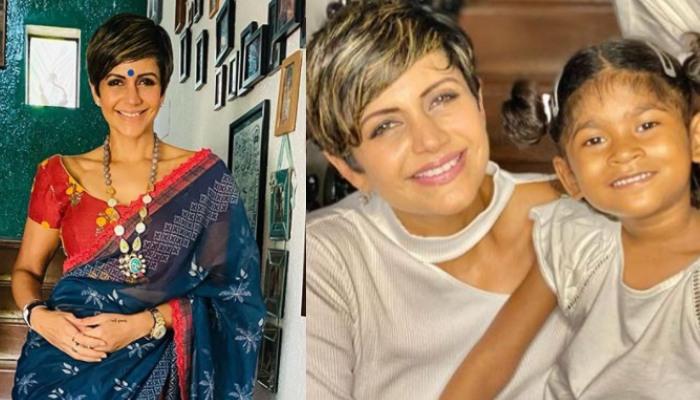 Mandira Bedi is an epitome of woman empowerment and has always inspired everyone with her fitness. Mandira had risen to fame with her phenomenal acting in the 90s serial, Shanti. She had broken all the stereotypes set by the society and has always lived her life on her own terms. The actress had married filmmaker, Rraj Kaushal on February 14, 1999, and after 12 years of being married, the couple was blessed with a baby boy on June 17, 2011. (Also Read: Kangana Ranaut Glows In A Custom Made Multicoloured Lehenga For Her Brother, Aksht's Wedding)

Some time ago, Mandira had expressed her desire to adopt. Two years back, she and her husband, Rraj had applied for adoption at the CARA (Central Adoption Resource Authority) which is the central adoption agency under which all adoptions across the country take place. On the auspicious occasion of Dussehra, the couple had adopted a baby girl into their lives, whom they have named Tara Bedi Kaushal. And since then, she has been sharing glimpses of her little angel.

On November 11, 2020, Mandira took to her IG stories and shared an adorable picture of her baby girl, Tara Bedi Kaushal. In the picture, Tara can be seen sporting a white floral dress with her hair tied back. Along with the candid picture, Mandira put an emoji which read, “My Boo”. Take a look at the picture:

On October 25, 2020, Mandira Bedi and her husband, Rraj Kaushal had made the festive celebrations even more special as they had announced that they had welcomed a baby girl into their lives. The couple had excitedly revealed that their son, Vir Kaushal had become a big brother. Mandira and Rraj had posted their first family picture with Tara and Mandira had written, "She has come to us Like a blessing from above, Our little girl, Tara. Four years and a bit With eyes that sparkle like stars Sister to her Vir, Welcoming her home With open arms and pure love Grateful, thankful. blessed Tara Bedi Kaushal Became a part of our family on July 28 2020." While  Rraj had written, "On this festive occasion of Dussehra we would like to introduce you to the newest member of our family Tara Bedi Kaushal. Finally, the family is complete #humdohamaredo." (Also Read: Himansh Kohli Reacts On Being Targeted With Trolls And Hatred Ever Since Breakup With Ex Neha Kakkar)

On November 3, 2020, Mandira Bedi had taken to her Instagram handle and had shared a stunning monochrome picture with her daughter, Tara Bedi Kaushal. In the picture, the mother-daughter duo had looked gorgeous, as they had posed for the camera. Along with the picture, Mandira had written, "Mera Tala aur chaabi bhi! #LockStar" followed by a star and lock emoticons in the caption.

In an interaction with The Times of India, Mandira Bedi had spoken about the void she had felt in her family and the need of a sibling for her son. As a result, she and her hubby had decided to go for a second child. She had said, "Until the legal formalities are completed, one is not supposed to make it public. When a child comes home, he/she is considered to be in foster care for the first month; the legal procedures begin after that. However, since the courts were shut, we had to wait. We had applied for adoption three years ago, but it was during the lockdown that I felt the void even more. So, I revisited my adoption application (filed before the Central Adoption Resource Authority). We realised that our wait had been long as we had mentioned a preference for three states from where we would have liked to adopt." (Also Read: Ankita Lokhande Is Delighted As Her Boyfriend, Vicky Jain Visits Her, Shares A Droolworthy Picture)

Isn’t Tara adorable? What do you think? Let us know. Christmas is around the corner and we simply cannot wait till 25th December to have a merry day. With markets being decorated and the chilly breezes, we can smell Christmas waiting around the corner. We all must have had our fair share of stories, where we used to write letters