Malaika Arora never misses an opportunity to show her love for her beau, Arjun Kapoor. On November 29, 2020, Malaika shared a candid love-filed picture from their recent vacation. 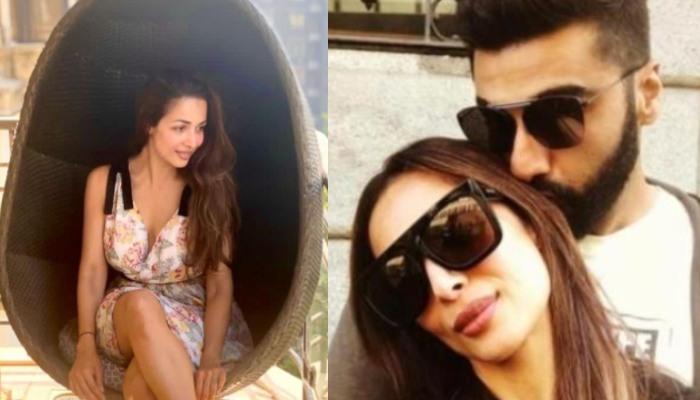 In the world of glamour, relationships are often complicated. There is always an uncertainty but in this uncertain world, meeting someone, with whom you share a great rapport is a big deal. It was a shock for everyone, when Bollywood diva, Malaika Arora had called off her 17-year long marriage with Arbaaz Khan. The two had announced their separation in 2016 and had gotten legally divorced on May 11, 2017. Without washing their dirty linen in public, the two had graciously moved on in their respective lives and had given love another chance. (Also Read: 'Ye Rishta Kya Kehlata Hai' Fame, Divya Bhatnagar Is On Ventilator, Her Husband, Gagan Has Left Her)

After their separation, the dating rumours of Malaika Arora and Arjun Kapoor had started doing rounds. From their dinner dates to secret vacations, the duo had become the talk of the town. And when Arjun had turned 34 on June 26, 2019, the couple had made their relationship official. Malaika had taken to her Instagram handle and had posted a picture with Arjun and had captioned it as “Happy birthday my crazy, insanely funny and amazing @arjunkapoor love and happiness always". Since then, the two have been giving major relationship goals to the millennials with their oh-so-lovely chemistry.

Arjun Kapoor and Saif Ali Khan had jetted off to Dharamshala for the shooting of their upcoming film, Bhoot Police in mid-November. And the two were joined by their respective partners, Malaika Arora and Kareena Kapoor Khan. We still couldn’t get over their lovely pictures, when Malaika treated us with another adorable picture. On November 29, 2020, Malaika took to her IG handle and shared a love-filled picture with Arjun. In the picture, the two looked lovely as they hugged each other. Along with the picture, Malaika wrote, “Never a dull moment when ur around.” On Malaika’s post, Arjun commented, “I agree.”

On October 23, 2020, Malaika had turned 47 and her beau, Arjun had shared the sweetest wish for her. The actor had shared an adorable picture of the birthday girl in her casual best. The diva had looked gorgeous as always in a pink tracksuit with her hair tied up in a bun as she had posed for the camera with her trademark pout. Arjun had written, "Happy Birthday my fool @malaikaaroraofficial" atop the picture. (Also Read: Wajid Khan's Wife, Kamalrukh Claims That Her In-Laws Have Scraped Financial Support From Her Kids)

In an interview with the Filmfare, Arjun Kapoor had candidly spoken about accepting his relationship with Malaika Arora in the media and how his family has been supportive of his choices. Speaking about how happy his family is with his relationship with Malaika, Arjun had stated, “They are happy. That's the reason I have been able to come out. There is genuine happiness for me. I have been through hell. I have been through a roller-coaster... from the age of 10-11 till 33 today. My parents separated when I was around 11 years old. Today I have some stability in my life and if someone gives me happiness, my family won't be against it. I am genuinely happy. That is why a Friday at the box-office doesn't decide my life. Three years back, I had have been like, I am dying! What's gonna happen? Today, I am relaxed.”

Since the day the rumours of Malaika dating Arjun had started doing rounds, there has been a constant comparison between the two. Malaika had been trolled for her age difference with Arjun but it seems like the gorgeousness doesn’t take all these haters seriously. In an interview with The Times of India, Malaika had opened up about being trolled on social media. Talking about the same, she had said that she doesn’t really care about these trolls and has never taken them to heart. According to her, people will keep on saying something or other as she feels ‘logon ka kaam hai kehna’ and she can’t stop them all. (Also Read: 'Ishqbaaaz' Fame, Nakuul Mehta Grooved With Wife, Jankee On A Romantic Song On Her Godh Bharai Rasam) When you are in love, there are more pictures of your partner on your phone than yours alone. Your photo gallery is filled with their pictures from different dates and they become the prime subject of your interest. You prefer clicking couple pictures more than solo pictures and this beautiful