Priyanka Chopra Jonas and Nick Jonas got married on December 01-02, 2018 at Umaid Bhawan Palace in Jodhpur, Rajasthan. Together, they make an awesome couple, not only because they are revered celebrities internationally, but also because the two are fashionistas in every sense. After all, Priyanka is a former Miss World and Nick was recently voted as the Most Stylish man by GQ. (Suggested Read: Bollywood Singer Ankit Tiwari Becomes A Father To His Firstborn, Reveals Baby's Unique Name)

Naturally, with such two fashionable celebrities on the envelope of superstardom getting married, we were all geared up to catch the first glimpse of their wedding outfits. And they didn't disappoint. Fans know that Priyanka and Nick's wedding outfit was designed by Ralph Lauren. On the official Instagram handle of Ralph Lauren, two posts have surfaced online which have detailed out the making of Priyanka Chopra's wedding gown. In the first video, we can see the gown in making, getting hand stitched and given finesse to the highest degree. Take a look:

The caption that goes with the above video shares the numerics behind Priyanka Chopra's wedding gown. Can you believe it when we say that it took 1,826 hours, 32,000 pearlescent sequins, 5,600 seed beads, and 11,632 Swarovski crystals in the entire process? The caption reads as, "The bespoke gown Ralph Lauren created for Priyanka Chopra's wedding to Nick Jonas exemplifies the highest levels of exquisite, meticulous handwork. Fifteen artisans in Mumbai, India, hand-embroidered the coat with a variety of complex techniques, from fine cording to tulle appliqués and pastiche threadwork inspired by Chantilly lace, for a total of 1,826 hours. Worked into the scrolling floral motifs were 32,000 pearlescent sequins, 5,600 seed beads, and 11,632 Swarovski crystals. The coat was closed down the front with 135 satin-covered buttons and finished with scalloping at the high-cut neck and long sleeves. The strapless column dress worn beneath was embellished with more than two million pearlescent sequins to bring a sense of shimmering dimension to the overall look."

Priyanka Chopra's wedding gown also had a 75-foot-long veil attached with it. Though it propagated into many hilarious memes on social media, we couldn't take our eyes off it. The above video which shows Priyanka in awe looking at her own wedding veil has been worded as, "One of the fittings for Priyanka Chopra's wedding dress was held in Paris, where she saw the full look come together for the first time, complete with a veil. The sweeping, 75-foot veil she wore on the day of the ceremony was actually comprised of two different cuts of tulle—a shorter fingertip-length veil worn under the epically longer one, which was carried behind the bride by six attendants."

The third video (above) highlights the designing of Priyanka Chopra's wedding gown. It has been captioned as, "Mr Lauren began the months-long design process by showing Priyanka Chopra sketches for her custom gown, which combined the glamour of a sequin-embellished strapless dress with the romance of a sheer, hand-embroidered coat. The look was emblematic of some of the formalwear codes he has always highly regarded: a silhouette-skimming the body while simultaneously seeming to float away from it; a play between sheer and opaque; and, of course, intricate, handmade details." 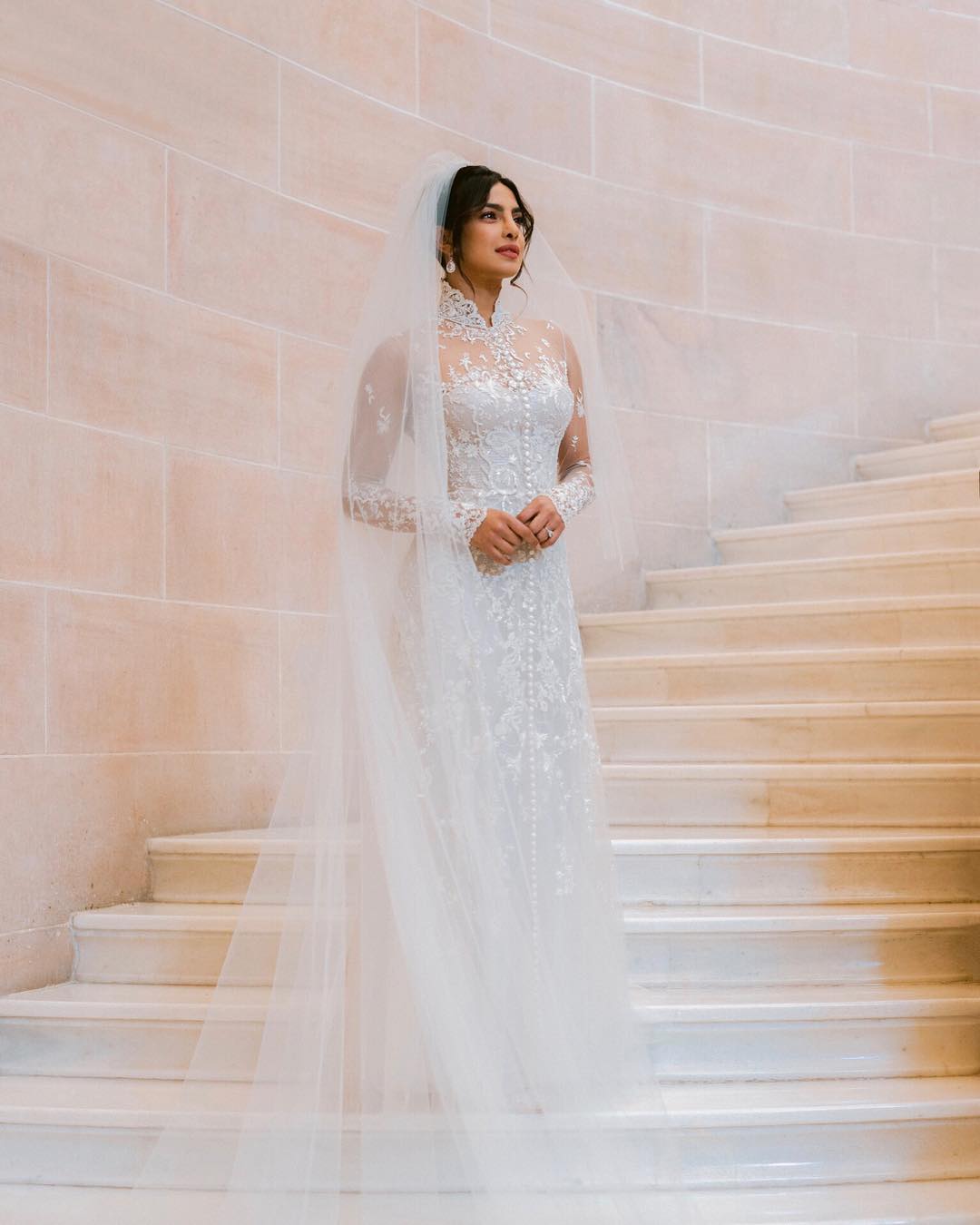 On the Ralph Lauren website, we came across an article titled- TYING THE KNOT written by their Luxury Editor, Phillip B. Crook. Do you know Priyanka Chopra had requested Ralph Lauren to incorporate eight special words on her wedding gown? A few of those words are 'Hope', 'Compassion', her now-husband's full-name- Nicholas Jerry Jonas, 'Family', 'Daddy's Lil Girl', among others. In the article, Phillip writes, "At Priyanka’s request, eight special words and phrases were incorporated into the embroidery pattern of the coat, including “Hope” and “Compassion,” as well as a Hindu mantra, “Om Namaha Shivay,” and “December 1, 2018,” the date of the ceremony. The placement of the groom’s full name, Nicholas Jerry Jonas, at the front of the coat was mirrored on the back by the names of her parents. (A piece of lace from the dress Nick’s mother wore at her own wedding was also sewn into the pattern.) “Family” scrolled along the right sleeve, where Priyanka has a wrist tattoo reading “Daddy’s Lil Girl…” And, finally, just over her heart, the word “Love” was stitched in ivory thread." 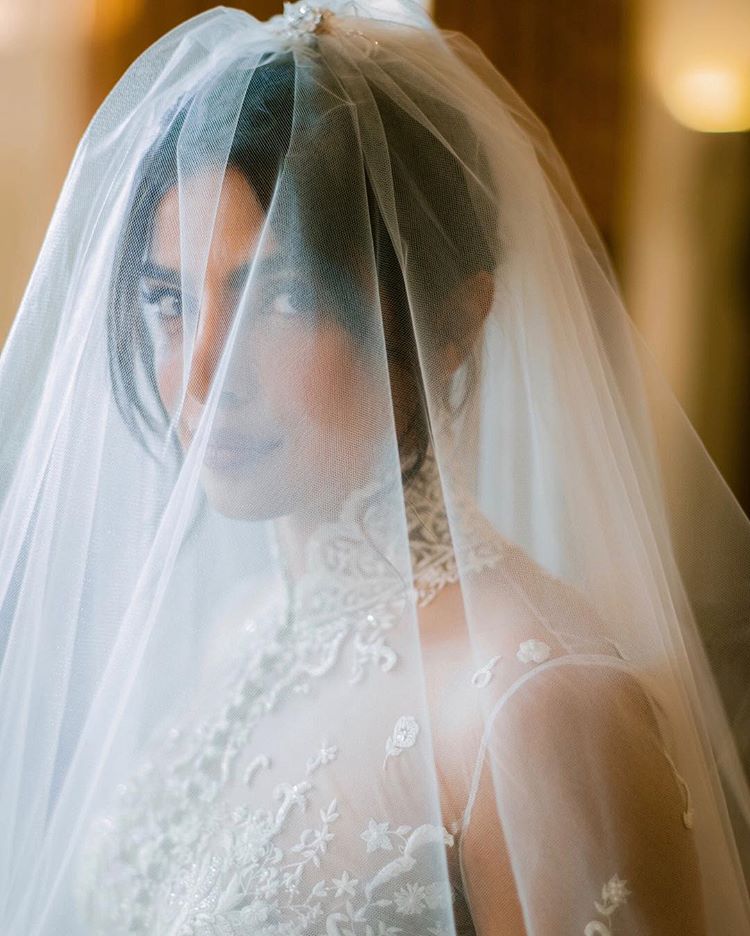 About Priyanka's choices related to her wedding gown, Ralph Lauren himself said, "This isn’t about a dress. It’s about a woman and a moment. Priyanka knows exactly who she is, and so I wanted the dress to reflect, not only her love story and the romance of India, but also her unique sensibility: strong, smart, and beautiful." 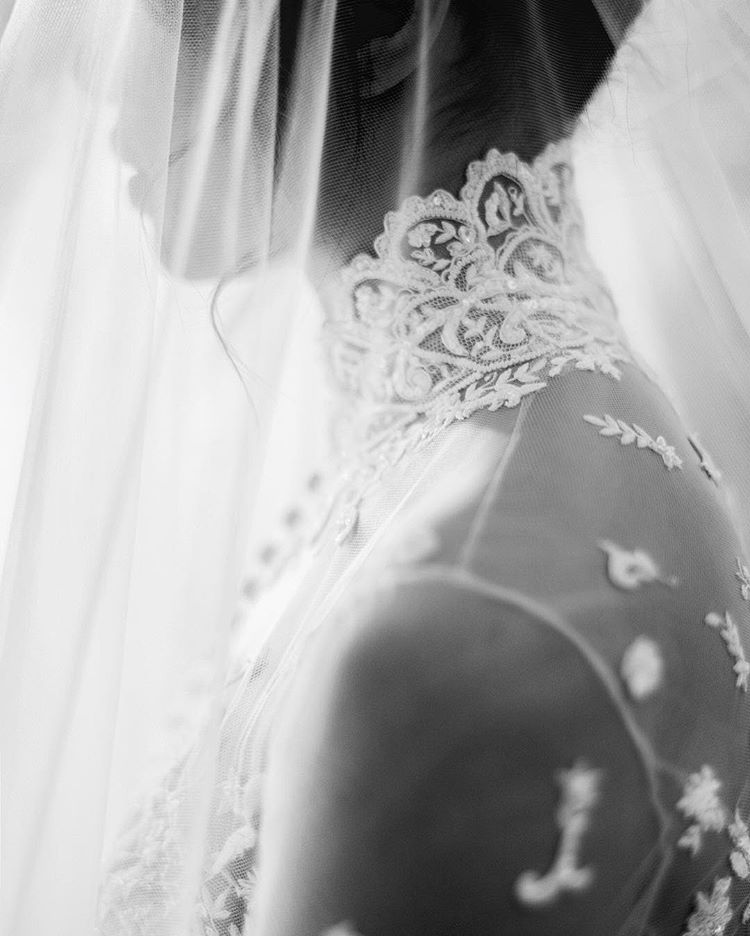 Nick Jonas' wedding outfit too was a Rapl Lauren sartorial. About  Nick's wedding avatar, Phillip writes, "Nick wore a custom Purple Label double-breasted tuxedo with a piece of the bride’s dress concealed at the interior lapel of the jacket, just over his heart. The fragment had been hand-embroidered with the Urdu words “My Jaan” (meaning “My Life”). His 12 groomsmen, including Priyanka’s brother, Siddharth, and Nick’s three brothers, Kevin, Joe, and Frankie, wore Purple Label peak-lapel tuxedos with custom vests and custom patent leather shoes. Nick’s father, who officiated the Christian ceremony (a traditional Hindu ceremony followed the next day), also wore Purple Label." 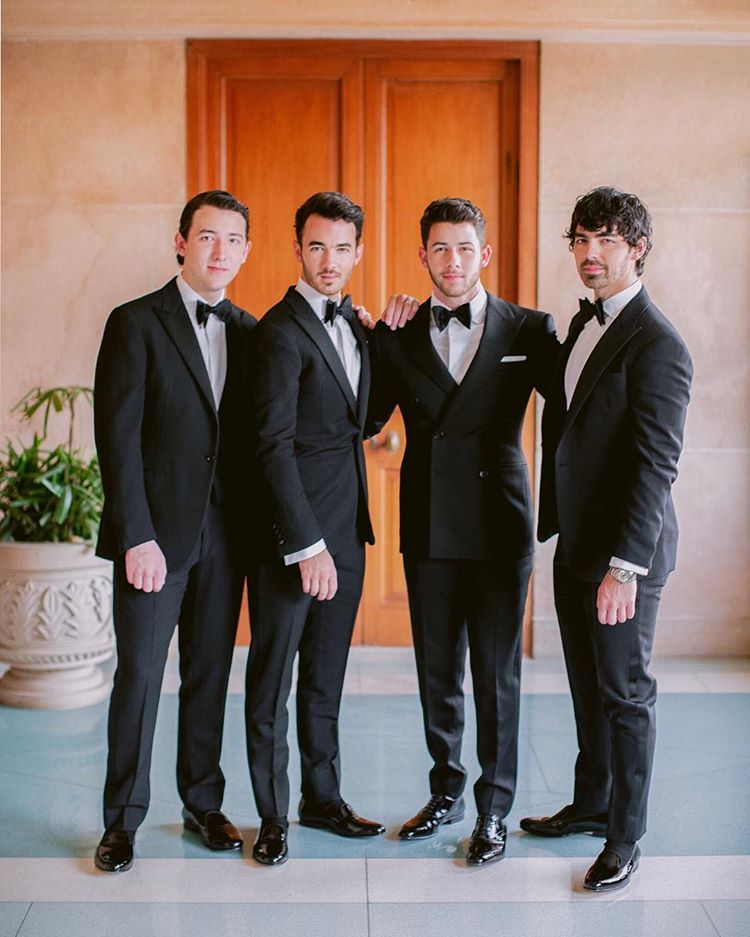 The making of Priyanka Chopra's wedding gown has totally blown you away, right? Which girl wouldn't want her wedding outfit to be like this?