Paras Chhabra has removed his ex-girlfriend, Akanksha's name from his tattoo and has replaced it with Bigg Boss' eye tattoo. Scroll down to know what Mahira Sharma has to say about the same It's been a long time since Bigg Boss season 13 has ended but even to this day our sanskari playboy, Paras Chhabra is in the news for his tangled equations with his ex-girlfriend, Akanksha Puri and his current, rumoured girlfriend, Mahira Sharma. Now, in the latest development in the whole charade, the news is, Paras has removed his ex-girlfriend, Akanksha's name from his tattoo and has replaced it with Bigg Boss' eye tattoo. We have gathered statements about the same from Paras and Mahira both. Scroll down to know more! (Recommended Read: Soha Ali Khan Shares An Adorable Video Of Little Inaaya Doing Yoga, On International Yoga Day)

After a lot of speculations and rumours, Bigg Boss fame, sanskari playboy, Paras Chhabra had finally removed his ex-girlfriend, Akanksha Puri's name's tattoo form his wrist and replaced it with guess what, Bigg Boss's eye tattoo! Talking about the same in an interview with The Times Of India, he had said, "I want to break free from my previous relationship and any memory attached to it. That’s why I decided to modify the tattoo. I don’t think I will get a name inked on my body anymore." He had also shared details about his Bigg Boss tattoo. He had said, "'Bigg Boss' has given me a lot and I feel a strong connection with the show. During my stay inside the house, I learnt about a lot of things that were happening outside on the personal front. Bigg Boss ki aankh ne meri aankh khol di (smiles!). That’s why I decided to get the famous eye inked on my wrist in place of my old tattoo. It took me two hours to modify the tattoo." Scroll down to know what Mahira Sharma has to say about the same!

Now, in a conversation with SpotboyE, Paras Chhabra's alleged beau, Mahira Sharma talked about Paras removing his ex-girlfriend, Akanksha Puri's name's tattoo and replacing it with a tattoo of Bigg Boss' eye. She said, "When we are locked inside Bigg Boss house, we used to say that he should replace it with Bigg Boss eye. And I think he took that conversation too seriously and actually replaced the tattoo with the eye. And he says ki Bigg Boss ne meri aankh khol di. He sent me the pictures as soon as he changed it and I really liked it. It's a beautiful eye." In other news, it seems we could hear the wedding bells of Paras and Mahira very soon as the two were spotted celebrating Mahira's mother's birthday together. Paras and Mahira had a blast celebrating her mother's birthday and the happiness could be clearly seen on their faces! Since they couldn't go out, Mahira made her mother's birthday extra special by celebrating it with her rumoured beau, Paras. He took to his Instagram stories to share glimpses of the same. The pictures sees Mahira Sharma's mother, Saniya Sharma cutting a cake, while the video features Paras feeding her a piece of cake, and smearing it on her face, saying “Yeh toh banta hai.” Take a look at the celebrations below. (Also Read: Karan Johar Was Not Happy With Alia Bhatt's Decision Of Marrying Ranbir Kapoor) Earlier, in an interview with ETimes, Paras had opened up about his equations with rumoured girlfriend, Mahira Sharma and had talked about taking things forward organically. He had said, "We met a couple of times during the lockdown. Acchi feeling aati hai Mahira se mil kar and we share a beautiful bond. I don’t want to go down the regular route of proposing to her. I want everything to happen organically." He had further added, "Naturally feelings generate ho and automatically relationship shuru ho jaaye. She is a very good friend as of now. Mahira and I like each other a lot, but abhi relationship tak nahi pahunche hai. Had she participated in ‘MSK’, things would have progressed faster." (You May Also Like: Rana Daggubati And Miheeka Bajaj's Pre-Wedding Celebrations Continue, To-Be Bride Wore Matching Mask) 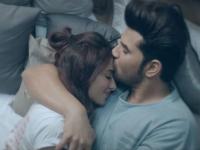