We have seen many celebrities making their own Ganesha with clay, and this time, Jay Bhanushali and Mahhi Vij’s little buds, Khushi and Rajveer have taken upon them to make a Ganesha on their own. 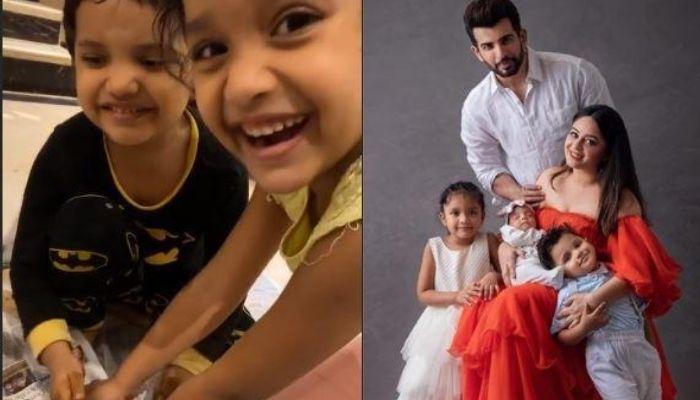 Ganesh Chaturthi is around the corner and we all know how elaborately this festival is celebrated in Maharashtra. From bringing Lord Ganpati ji home to performing puja and finally doing the visarjan, people are flushed with happiness for 10 days. However, there will be low key celebrations this year owing to the pandemic, yet this doesn’t halter the zeal in people to bring Ganesha home. We have seen many celebrities making their own Ganesha with clay, and this time, Jay Bhanushali and Mahhi Vij’s little buds, Khushi and Rajveer have taken upon them to make a Ganesha on their own. (Also Read: Daddy, Angad Bedi Paints The Little Nails Of Daughter, Mehr Dhupia Bedi As She Instructs Him [Video])

After a few years of married life, Jay Bhanushali and Mahhi Vij had embraced parenthood for the first time when they had adopted their caretakers’ kids, Khushi and Rajveer. Jay and Mahhi had decided to fund the little ones’ education. In 2019, Jay and Mahhi’s family had gotten completed with the arrival of a baby girl, Tara Bhanushali. Khushi and Rajveer are the apples of Jay and Mahhi's eyes and now with Tara in their lives, their ‘happily ever after’ journey is magical! The couple can be seen equally loving their three kids and celebrating every occasion together.

As Ganesh Chaturthi is almost here and we can feel the festivity, Mahhi Vij’s kids are also heaps of excited. Taking to her IG stories, Mahhi Vij shared how happily her kids, Khushi and Rajveer made their Gannu bhaiya from clay. In the first video, we can see Khushi and Rajveer doing the arrangements to start with the process of making Ganesha. In the second video, we can see Khushi and Rajveer working with the clay while exuding happiness. In the third video, Khushi can be seen talking about making the Ganesha on her own with brother, Rajveer and how Mahhi helped them. And in the end, Rajveer chants ‘Ganpati Bappa Moriya’. Take a look:

Despite all the efforts and love showered by Jay and Mahhi on their three kids, netizens anyhow find a way to troll people. It was in March, when Mahhi Vij had posted a beautiful family picture with hubby, Jay Bhanushali and their daughter, Tara Bhanushali and had gotten trolled for the picture. One of the users had commented on the post, “Sometimes I feel they don’t take care of their other babies.” Jay had chosen to give a befitting reply to the troll and had replied to the post, “@karra_sanjana and @nagar1664 have you even attempted helping or taking responsibility of any child or helping a family...you guys have no clue and you are judging us..in this epidemic the 2 kids and there father mother are staying with us so that we all can be protected.I am a foster father to the kids and not here to be judged 24/7 by you or anyone so pls be careful before giving any kind of statement.” (Don't Miss: Natasa Stankovic Shares A Kissing Picture With Hubby, Hardik Pandya As She Misses Him) 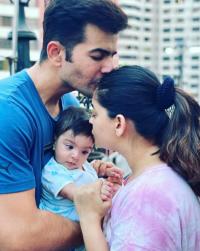 In an interview with BollywoodLife, Mahhi had revealed that they will not differentiate between their biological and adopted kids, and had said, “A lot of people keep asking my friends if they are our kids because we feel that they are our kids. We want to give them best in our capabilities. I don’t care what people say they have all the time in the world to talk. They stay with us we have no issues of them being a part of our space. Kids are adorable, Jay and I love them. We want to educate them and yes in future even if we have our own kids we will give them same life. We will not differentiate. We want to give them best of everything just like we would want to give it our own kids.” (Recommended Read: Sushant Singh Rajput's Niece, Mallika Singh Hits Back At Trolls Grief-Shaming His Sister Meetu Singh) 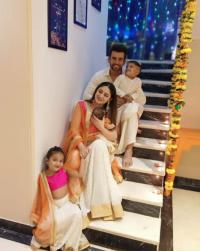 Are you also excited for Ganesh Chaturthi like Mahhi Vij’s kids? One of the most loved couples of television, Mahhi Vij and Jay Bhanushali are doting parents to two adopted kids, Khushi and Rajveer. After the birth of their daughter, Tara, the couple was relentlessly trolled for disregarding their adopted kids over their daughter. And even now, trolls leave no chance