Mahhi Vij’s baby girl, Tara visited her nani's house on the occasion of 'kanya pujan', wearing a 'lehenga'. Her 'nani' blessed her with love and gifts. Check out the videos inside!

The nation is observing Navratri and everyone celebrates these nine auspicious days of Devi Maa in their own ways. While some people are celebrating ashtami today, others are waiting for navmi so that they can do kanya pujan. When a family has a little girl in their house, the kanya pujan becomes even more special as they believe that they have devi maa living with them. Mahhi Vij’s baby girl, Tara is also treated like a goddess in their house, and on the occasion of kanya pujan, her nani blessed her with love and gifts. (Also Read: Tara Wears Ghagra Choli, Asks If Anyone Wants To Go On Dandiya Night, 'Papa', Jay Bhanushali Reacts)

Tara had blessed the Vij-Bhanushali family on August 3, 2019, and since then, there is not a single moment that she is not pampered. Her nani, Mahhi Vij’s mother lives nearby and thus, Tara is always blessed with her unconditional love, living in her aanchal ki chhaon. Tara too is attached to her nani a lot and their love for each other is often displayed by Mahhi on her IG handle. As the nation is observing ashtami pujan today, Tara also visited her nani’s house for the puja.

Mahhi Vij took to her and Tara’s official IG handle to share some precious videos of Tara’s ashtami kanya pujan at her nani’s house. In the video, Tara can be seen enjoying her nanií’s company, who was giving her bangles. She can be seen blessing Tara and helping her wear bangles and chanting, Jai Mata Di. Tara too can be seen enjoying the happy feeling and festivity. The occasion of kanya pujan became even more special as Tara was looking like a doll in a pink-hued lehenga with blue leaf motifs over it. Her fountain ponytail made her look adorable. Take a look: 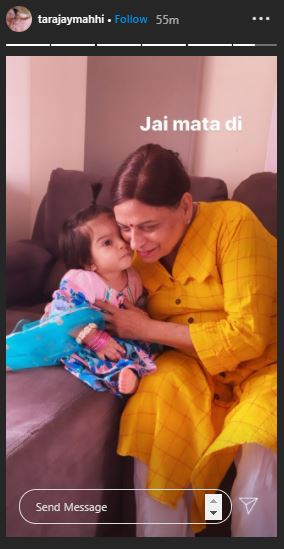 On Day 1 of Navratri, Mahhi Vij had shared a video and some pictures of baby Tara's first day of Navratri look on her IG handle, and we could not take our eyes off her! Little Tara had donned a maroon coloured dress, paired with a maroon headband and a cute bindi on her forehead which had doubled her cuteness. In the caption, Mahhi had written, "Jai Mata Di" followed by folded hands emoticon. (Recommended Read: Neha Kakkar And Rohanpreet's Wedding Desserts Have Their Picture On It, Sister, Sonu Shares A Video) Tara’s 'desi' side was on display on October 5, 2020, as the baby girl had donned a beautiful orange ensemble. The loving mommy, Mahhi Vij had posted a cute video of her baby girl. In the video, Tara was looking super cute in an orange sharara with a big orange bow headband. Mahhi had also posted Tara's gorgeous picture on her IG stories. 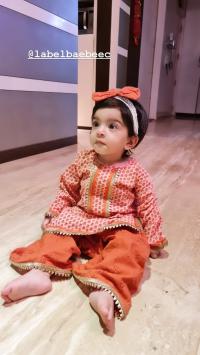 Tara has become her nani’s favourite and we have ample proof of the same. On January 7, 2020, Tara Jay Bhanushali’s parents had shared a video in which we could see Tara’s nani playing with her and the song ‘Mere Dil Ka Tere Dil Se Rishta Purana Hai’ was playing in the background. Sushma Vij could be seen enjoying her quality time with her little bundle of joy, Tara. The smile on Sushma’s face was enough to tell how happy and joyous she was while playing with Tara.

On December 28, 2019, we had stumbled upon an adorable picture of Tara from her Instagram handle which was beyond cute. The little cotton ball had looked adorable as she was curled up in the arms of her nani, Sushma. The picture was followed by a beautiful caption that could be read as "When I was in my mumma’s tummy my naani cooked scrumptious food for me and mumma thank u naanimaa. love you. thank you @thelooneylens for the click." (Recommended Read: Amrita Rao Caresses Her Baby Bump In A Red Saree, Celebrating Navratri And Her 9th Month [Video]) 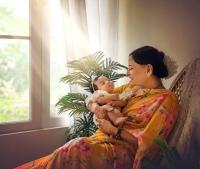 We loved Tara’s kanya pujan look and her masti at her nani’s home!