Mahhi Vij and Jay Bhanushali's adopted kids, Khushi and Rajveer are back from their hometown. Scroll down to check out sneak-peeks of the party hosted for their welcome! 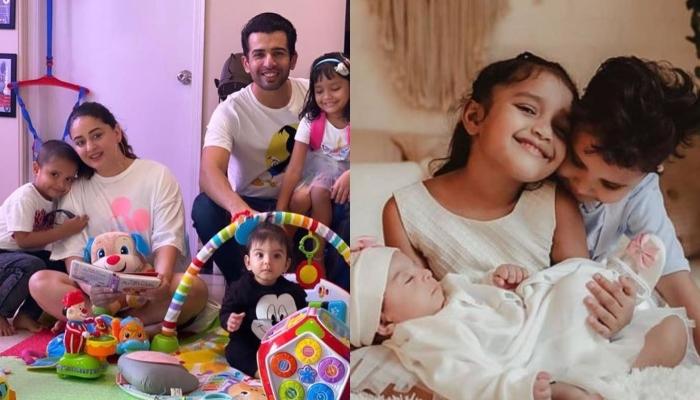 One of the most loved couples of television, Mahhi Vij and Jay Bhanushali are doting parents to two adopted kids, Khushi and Rajveer. After the birth of their daughter, Tara, the couple was relentlessly trolled for disregarding their adopted kids over their daughter. And even now, trolls leave no chance to demean the couple, but Mahhi and Jay give it back to them with their actions. (Recommended Read: Shweta Tiwari's Estranged Husband, Abhinav Shares Video Of Her Blocking Him From Entering Her House)

Some days ago, Mahhi Vij had shared a reel video flaunting a beautiful art piece of her' life in one frame'. In the glass-encased art, Mahhi Vij and Jay Bhanushali's kids, Rajveer, Khushi and little munchkin, Tara's foot impressions were made and kept. Mahhi had captioned the beautiful video as "Life in one frame @iamkhushiray @rajveercutestar tara Thank you."

For the unversed, Mahhi Vij and Jay Bhanushali's adopted kids, Khushi and Rajveer had gone to their hometown for a few months in August 2020, and now they're back. The occasion definitely called for a celebration, and the doting parents left no stone unturned for their grand welcome. Mahhi shared snippets of the in-house party hosted on the occasion of Khushi and Rajveer's return. She also posted a sweet video of Khushi and Rajveer playing with Tara, with the caption, "My babies are back." Check out the pictures and videos below:

It was on August 26, 2020, when Khushi and Rajveer had left for their hometown for a few months. Mahhi had shared an adorable video of a lovely moment shared between little Tara and her brother, Rajveer on her IG stories. Rajveer could be seen smothering his baby sister, Tara with kisses before leaving. Baby girl, Tara had also reciprocated her brother's love by kissing him back. The other video had featured little Khushi in her protective gear, face mask, shield and cap before leaving the house, and Mahhi could be heard saying, "Come soon meri jaan." (Also Read: Anil Kapoor Pens A Lovely Wish For His Son, Harsh Varrdhan Kapoor, Calls Him His Best Friend)

After Khushi and Rajveer had left, we could often spot Mahhi sharing 'miss you' notes with their pictures. A few days back, Khushi had shared a video message for her mommy, Mahhi, who had shared it on her IG stories. In the video, Khushi could be seen asking her mommy not to cry. Assuring that she will be back soon from her hometown, Khushi could also be heard saying, 'I love you mumma'. Rajveer too could be heard repeating his sister's words, "Mumma no cry" in the video.

After facing a lot of backlash from the trolls for sending their adopted kids, Khushi and Rajveer back to their hometown, Mahhi Vij had replied to the trolls in a graceful manner. Taking to her IG handle, Mahhi had shared a series of messages hitting at the trolls. She had shared that trollers are frustrated and have zero confidence, and she wishes a speedy recovery for them so that they mind their own business. She had also stated that if someone is happy and confident, they don't need to put down others. In one of the stories, Mahhi had also revealed how Khushi and Rajveer's father react to the comments by trolls. She had shared, "When I make Khushi Rajveers father read some shitty messages al he has to say to u al losers" followed by laughing emoji. (Don't Miss: Kareena Kapoor Shares A Picture Of Taimur With BFF, Malaika Arora's Son, Arhaan On His 18th Birthday)

We just love the bond Mahhi and Jay share with their kids!