Why only luxurious cars? Here are 10 Indian celebrities, who have been biking heavy, expensive, and posh motorcycles over the years.

Cars can amp up your dignity, but bikes will always offer you the thrill. A motorcycle at your garage will give a different vibe altogether. Mostly, we see Indian celebrities, travelling in their deluxe, elegant, and expensive cars but do you know there are many actors and cricketers, who are bike lovers and have been riding their own motorcycles for years? You will be shocked to know those names. From R. Madhavan to Vivek Oberoi to Kunal Khemmu, this list consists of many familiar and underrated names.

These celebs own Harley Davidson to BMW bikes to Suzuki Intruder to Ducati to Bentley to Lamborghini and other expensive ranges. You may ride sports cars and feel the adrenaline rush, but motorcycles give whole another experience. Even after having a different range of cars, these actors and celebrities ride their own bikes because of their passion. Riding a motorcycle is a skill. Accepting the winds with openness and the sound of the gears ignite the adventurous souls, and these feelings can only be understood by a bike-lover. Riding bikes will take you into an adventurous world. It conveys the gravitas of your personality. Let's dive into the list of celebs, who own the most luxurious bikes. 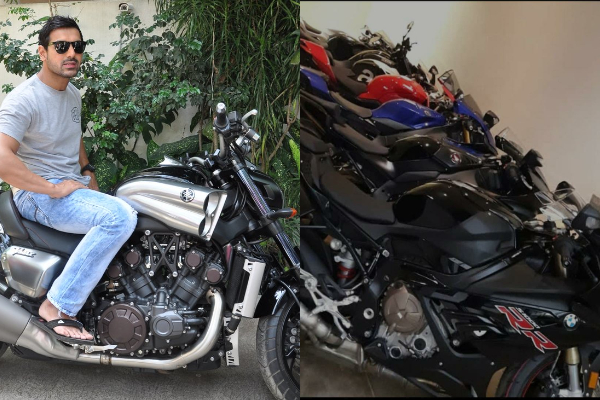 We all remember John Abraham searing in bikes in the film, Dhoom, and this list would have been incomplete if we had not mentioned him. John has a profound love for motorcycles, and they are one of his biggest assets. He has a great collection, which he calls his babies, including Yamaha RI, Ducati Diavel, Kawasaki Ninja ZZR 1400, but his most expensive one is the Yamaha VMax 1700 cc 60th-anniversary special. This one comes with a price tag of Rs 25 lakhs. 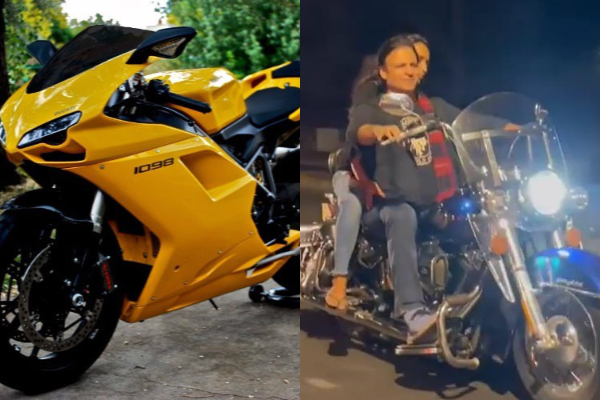 Vivek Oberoi's name has to be on the list of Bollywood actors, who owned and rode motorcycles among the first few Indian celebrities. He has been seen flaunting his yellow Ducati 1098 many times. It costs approximately Rs 45 lakhs. The bike is an absolute head-turner. He also rides Harley Davidson. We may not accept riding bikes without safety, but we have to mention his name as one of the most passionate celeb riders. MS Dhoni, the former captain of the Indian cricket team, has a garage full of his bike collection. Among them, the one that wins the title of being the most expensive one is the Confederate Hellcat X132. It runs on a 2.2-litre V-Twin, which generates 132hp of power and 200Nm of torque. It packs aircraft-grade titanium also. This super-deluxe bike comes with a price tag of Rs 47 lakhs. Among some premium cars and bikes, he also owns a Kawasaki Ninja H2. 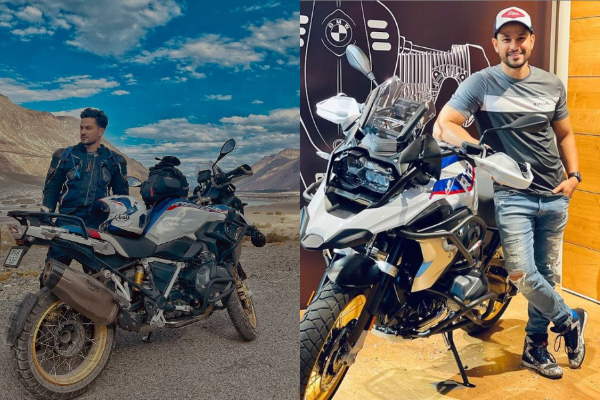 As per Kunal Khemmu's Instagram posts, he has a group of riders, who travel places riding their own motorcycles. After the big success of his recent films, Malang and Loot Case, Khemmu had gifted himself a luxurious BMW R1250 GS adventure that costs approximately Rs 16 to 22 lakhs. It comes with a 1254cc twin-cylinder boxer engine, generating power of 134bhp and a peak torque of 143Nm. He has been seen riding in the Ladakh terrains and even in Switzerland. 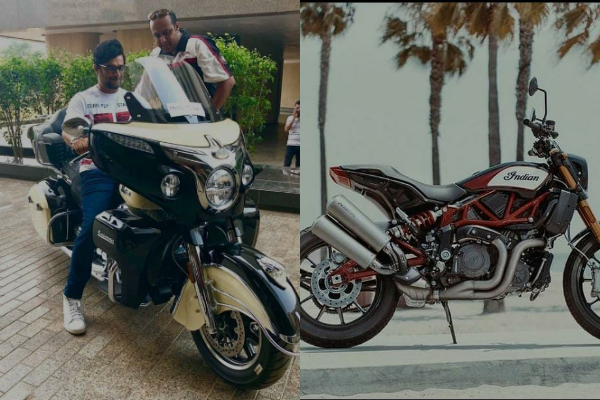 How can we miss out on R. Madhavan from the list? He is one of the most passionate bike riders and loves the thrilling experience of his two-wheelers. He owns Ducati Diavel and Yamaha VMax (not the anniversary edition), which are expensive, but Indian Roadmaster takes the title of luxury. The sound of the bike is enough to give you the thrills. It comes with a price tag of Rs 40 lakhs. 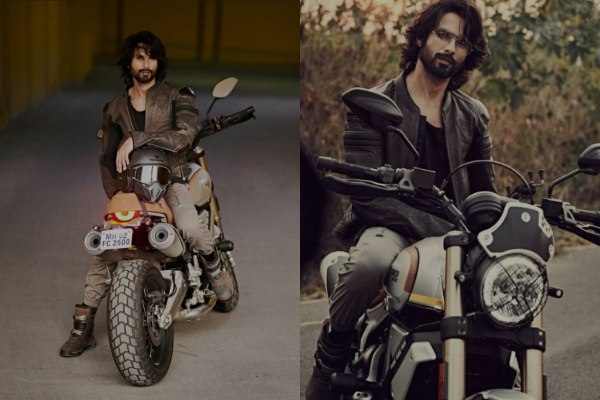 Bollywood actor, Shahid Kapoor is another petrolhead. He not only mesmerises everyone with his dance moves and acting skills in movies but also impresses with his bike riding style in real life. Along with some posh, luxurious cars, the actor owns a handful of motorbikes. In 2019, Haider actor had bought a brand new BMW R1250 S adventure at Rs 16.85 lakhs. His garage flaunts premium cars and bikes, including Jaguar XKR-S, a Range Rover Vogue, a blue coloured Harley Davidson Fat Boy, and a Mercedes-Benz AMGS 400. Sanjay Dutt, the handsome hunk of Bollywood, rides superbikes. Among his many expensive possessions, he owns a Harley Davidson Fat Boy. It comes with a price tag of Rs 15 lakhs. Not only this, but he also holds ownership of a Ducati Multistrada of Rs 14 lakhs. His enthusiasm for riding motorcycles is well-known in the Bollywood industry.

Don't Miss: Picked Her Up From Garbage Bin, Mithun's Adopted Daughter Dishani Is All Grown Up And Looks Stunning 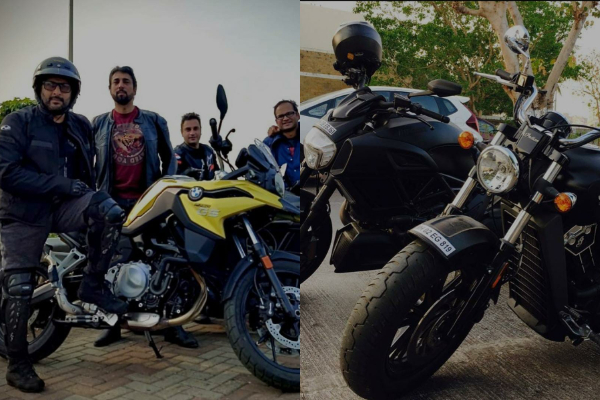 If Munna bhai (Sanjay Dutt) has it, how can Circuit miss it? Jokes apart, but Arshad Warsi is a huge bike enthusiast, and he loves to ride his two-wheeler. Asur actor owns a BMWF 750 GS bike that costs approximately Rs 12 lakhs, and according to media sources, it was gifted to him by his Pagalpanti co-actor, John Abraham. He also has a great collection of motorcycles including, Indian Scout. 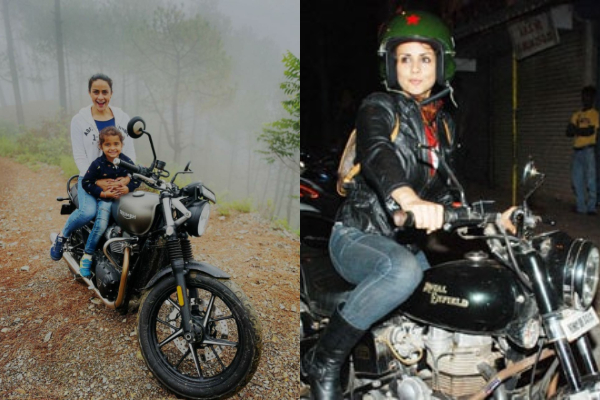 Gul Panag, the gorgeous model, is a passionate biker. Why should men have all the fun? This model owns a BMW 650 Funduro, a Royal Enfield, and she rides it with pride and style. The motorcycle's price range is approximately around Rs 12 lakhs. Did you know that she is such a bike enthusiast, her baarat had arrived on bikes? Rohit Roy, the very known face of the Hindi television series, is also a bike rider. People can see Rohit Roy on the streets of Mumbai vrooming with his motorcycle. He possesses a Honda Rune (limited edition) with 600 units only, and it comes with a price tag of Rs 24 lakhs. He loves to take rides on his bike, and it looks super chic.

If you were in doubt about which expensive bike you should buy, then take a cue from these Indian celebs. From John Abraham to MS Dhoni, among these ten celebrities whose motorbike did you like the most?