Ahead of International Yoga Day 2020, Kunal Kemmu and his daughter, Inaaya Naumi Kemmu are practising and preparing for the same. Kunal posted a video, teaching Inaaya how to chant 'Om'.

We have seen how Saif Ali Khan and Kareena Kapoor Khan's little bundle of joy, Taimur Ali Khan is the youngest and cutest fitness freak just like his star mother. But his cousin sister, Inaaya Naumi Kemmu isn't less than him! Soha Ali Khan and Kunal Kemmu’s two-and-a-half-year-old daughter, Inaaya has already won our hearts with her black flip and yoga and is equally a fitness enthusiast at such a young age just like her star family. (Also Read: Inaaya Naumi Kemmu Gazing Outside Her Window Is How All Of Us Are Waiting For 'Normal' To Come Back)

Last year on June 21, 2019, i.e., International Yoga Day, Kunal Kemmu had delighted their fans with a glimpse of his little bundle of joy, Inaaya Naumi Kemmu attempting Yoga to mark this special day. Sharing a glimpse of how baby Inaaya was trying to follow her daadi, Jyoti Kemmu under the supervision of her grandfather, Ravi Kemmu, Kunal had captioned it as “Learning yoga from her grand mother under the watchful guidance of her grand father #happyinternationalyogaday.” 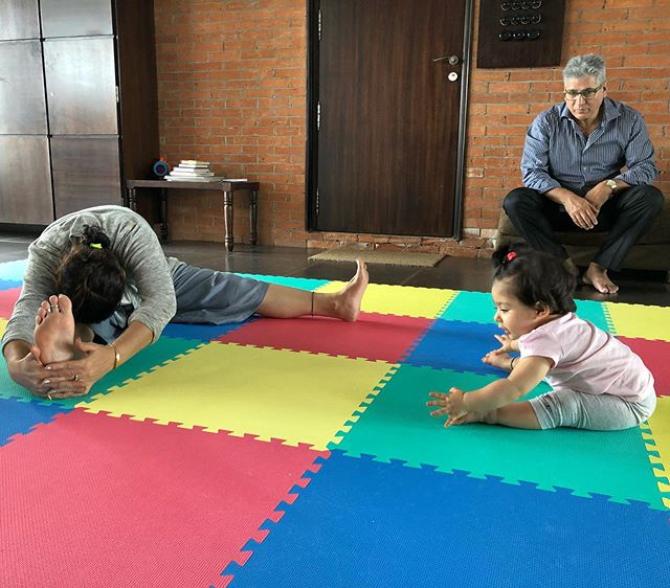 Ahead of International Yoga Day 2020, Kunal Kemmu and his daughter, Inaaya Naumi Kemmu are practising and preparing for the same. Kunal posted a video with his little one, where the father-daughter duo could be seen chanting ‘Om’ and the actor teaching his daughter how to sit cross-legged while doing it. The little angel looked intently and followed the instructions of her father. Kunal captioned it as "Preparing for world yoga day P.s: both of us were having a bad hair day."

Soha Ali Khan, Kunal Kemmu and Inaaya Naumi Kemmu had explored Australia during their New Year vacation, and since then, they have been sharing the memories from their holiday. Post returning from their Australian holiday on January 8, 2020, Kunal had posted an IG story which was a throwback video of his baby girl from their vacation. Kunal had shared a video of Inaaya as she made a splash in a puddle and had written, “The joys of simple things” atop it. Soha too, in her Insta story, had given a glimpse of Inaaya’s meditation and yoga class. She had written, “Never too early to start meditation” atop it. Here are the screenshots of the same: 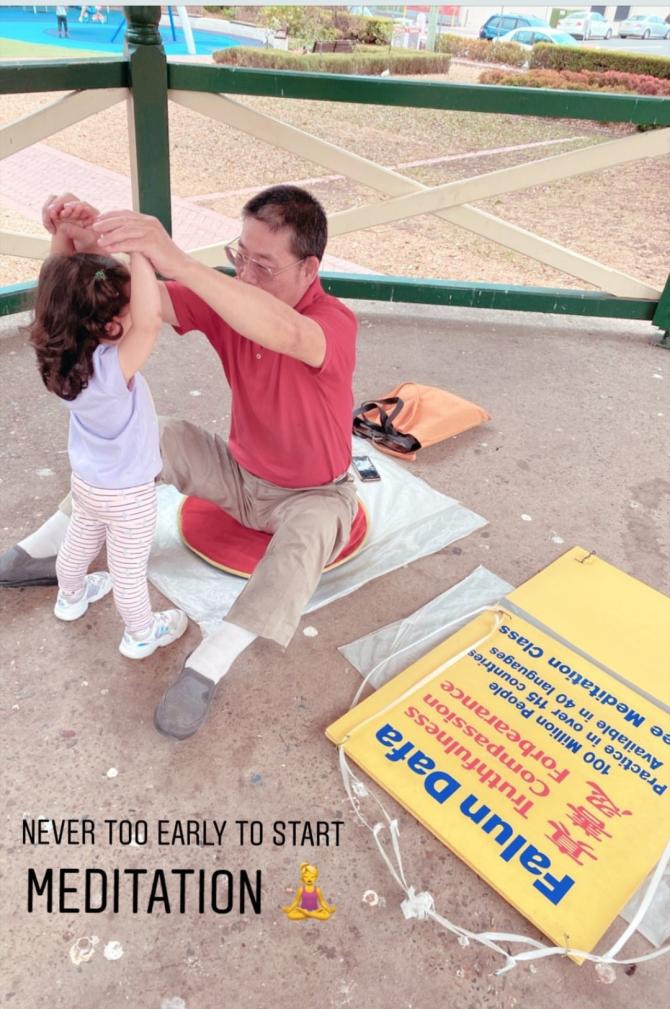 Because of the pandemic, everyone’s advised to stay at home to stay safe. Parents with little kids are struggling the most as they have to find different ways daily to entertain their kids at home. Kunal Kemmu and Soha Ali Khan have been also exploring different ways to keep their two-and-a-half-year-old daughter, Inaaya Naumi Kemmu entertained and engaged at home. On April 16, 2020, Kunal had posted a slo-mo video of flipping his daughter, Inaaya as she couldn’t control her happiness. Giving a glimpse of the toddler power and girl power, Kunal had captioned it, “Flipping into the weekend. #girlpower #toddlerpower.” (Also Read: Taimur Ali Khan And Inaaya Naumi Kemmu Talk Over Video Call In Their 'Language', Reveals Kunal Kemmu)

Later, Kunal Kemmu had also given a glimpse of his workout with ‘the best trainer in the business’. As Kunal can be seen doing crunches in the Boomerang, his baby girl, Inaaya Naumi Kemmu had helped and motivated her fit daddy to do more. Dressed in a peach t-shirt and black tights, Inaaya had looked super-adorable in her two ponytails seated on a stool and training her daddy as he attempted the crunches. Kunal had captioned the Boomerang as “I got the best trainer in the business.”

In an interview with the Hindustan Times, Kunal Kemmu had revealed how their daughter, Inaaya Naumi Kemmu had kept them on toes during the lockdown. Sharing how her routine helps them with their daily schedule, Kunal had said, “The one thing that has kept us on our toes is our daughter. Normally, in this situation, things could tend to get boring and lazy but we are aware that with Inaaya, we have some activities to do. Thanks to her schedule there is some routine that is still alive. She wakes up at a certain time and her time is divided into school and play time. In fact, she is aware that there is something called the coronavirus because of which you cannot go out of the house. Also, she helps us in motivating to do things.” 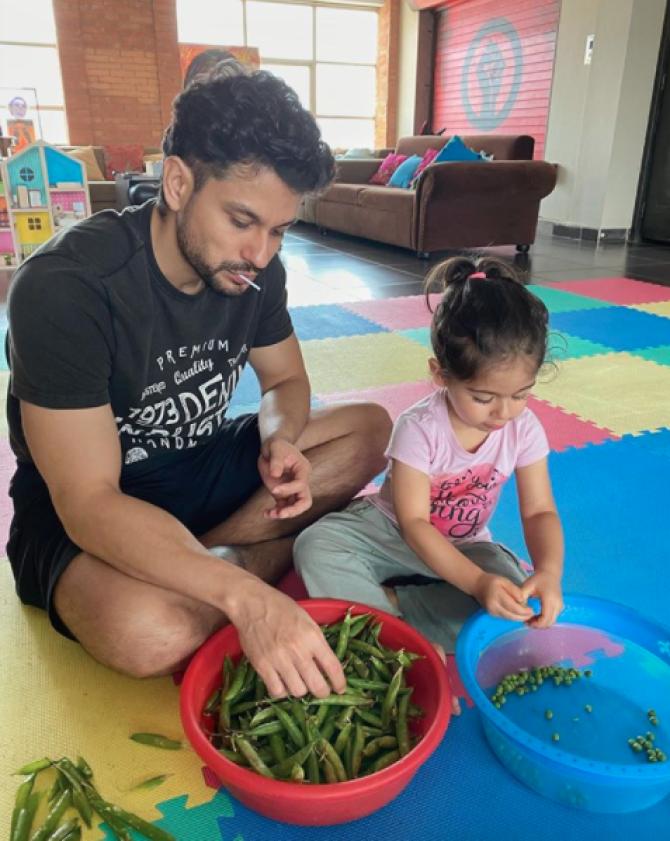 Revealing how lockdown is the best time for people to invest in their hobbies and what he is doing with his daughter, Inaaya Naumi Kemmu at home, Kunal Kemmu had remarked, “I believe a routine is important. The idea is to take one day at a time and count your blessings. I have had days when I have to crawl out of the day and get myself in the shower. My social media is the best way to know in what kind of mood I am. Be it playing the guitar or photography I read a book, write for a bit, watch something on television and then spend time with my daughter. Like I do a lot of craft activities with Inaaya which took me to my childhood days or just paint in a book which I end up doing a lot more than her so it is real fun.” (Also Read: Taimur Ali Khan Lies On Saif Ali Khan As Kareena Kapoor Captures The Moment, His Smile Is Priceless) Can’t wait to see the final result of Kunal and Inaaya’s practice on International Yoga Day!