Nupur Sanon gives her elder sister, Kriti Sanon a lockdown haircut and we are in awe of her skills. Check out the video inside!

Your sister is your guiding angel. She can fight with the world for your happiness and can also fight with you over the smallest of things. From asking you to wear her clothes to fighting over a bar of chocolate, sisters have all sorts of weird fights and love stories to share. B-town is filled with some amazing sister bonds. Deepika Padukone-Anisha Padukone, Janhvi Kapoor-Khushi Kapoor, Sonam Kapoor Ahuja-Rhea Kapoor and many others have been giving us major sister squad goals. One such sister squad is of Kriti Sanon and Nupur Sanon. (Also Read: Riddhima Kapoor Finds It Hard To Deal With Her Father, Rishi Kapoor's Death, Shares Family Photos)

Kriti Sanon has made herself a known name in the entertainment industry on her own because of her talent and her skills. However, Kriti is not in news only because of her professional commitments, but also because of her relationship with her family and especially her little sister, Nupur. Nupur Sanon is as talented as her sister, Kriti and had made her debut with a music video, Filhall opposite Akshay Kumar. The Sanon sisters are always backing each other and Nupur often refers to Kriti as chhoti mummy as Kriti is always protective of her. However, this is the true beauty of a sister’s bond. The Sanon sisters are spending their quarantine together and often share snippets of their lockdown life on their respective social media handles. Now, Nupur has given her elder sister, Kriti a lockdown haircut and we are in awe of her skills. Kriti Sanon took to her Instagram stories initially to share with her fans that her sister, Nupur Sanon is going to give her a lockdown haircut, asking them to wait for her to share the final look. On May 21, 2020, Kriti has finally shared the video of her little sister, Nupur chopping off her long tresses to give her a new look. In the video, initially, Kriti can be seen confused looking at the length of her hair, asking her sister how short she is going to do her hair? However, after the whole process, she proudly flaunted the new short sassy haircut given to her by her sister, Nupur. Kriti’s caption can be read as “Baal baal bach gaye... Watch it till the end to see for yourself! Have never ever gone this short! And I Love It!!! Thank you @nupursanon for such a refreshing cut. P.S. You did scare me with your goofy wicked smile and the fact that u were constantly moving your booty on the punjabi tracks while you had my precious tresses in your hand! #LockdownWithTheSanonSisters #TheSanonSisters.” Take a look: 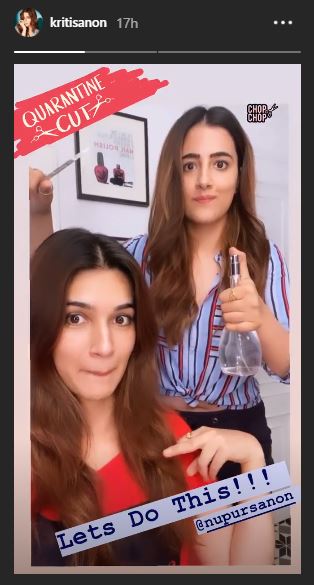 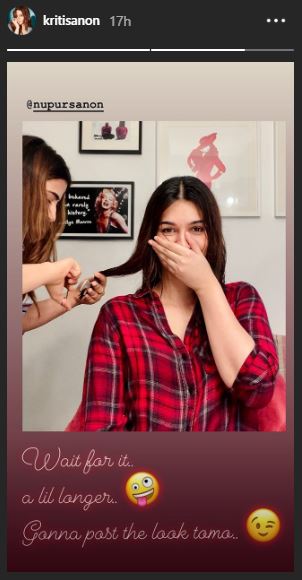 The Sanon sisters are very close to each other and never miss any chance to pamper one another. While Nupur chopped off Kriti’s hair this time, earlier it was her elder sister, Kriti, who had given a champi to her little sister, Nupur. On March 22, 2020, Kriti Sanon had taken to her Instagram stories and had posted a long video in three parts to share her plans of the Janata Curfew Day. In the video, the actress had turned into a legendary actor, Johnny Walker from his iconic song, ‘Sar jo tera chakraye’ and had given a perfect champi to her sister, Nupur Sanon. Along with the video, the actress had written a small caption on the stories that could be read as “Its #champitime ‘Things we never have the time for’! #JantaCurfew #StayHome.” Take a look. (Recommended Read: Divya Agarwal Gets Hate Comments After Shutting Period Shaming, Reveals Discussing Periods With Bro) 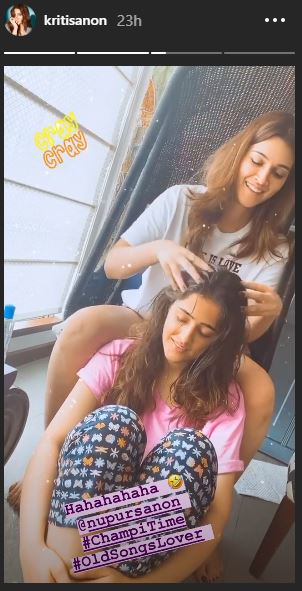 In an interview with the Hindustan Times, when Nupur Sanon was asked about her last fight with sister, Kriti, she had remarked, “I went into my room because I was in that zone when I wanted peace and did not want anyone around. This woman (Kriti) followed me into the room and she was standing on top of my head.” Instantly, Kriti had chipped in to say, “Something happened and she snapped (enacts a slap) and my instant reaction was (enacts another slap).” During the course of the interaction to tease Kriti, Nupur had hilariously revealed that Kriti takes one hour in the washroom. To this, Kriti had elaborated, “I check my messages, WhatsApp, Insta. I reply to all my messages, all on the pot.” 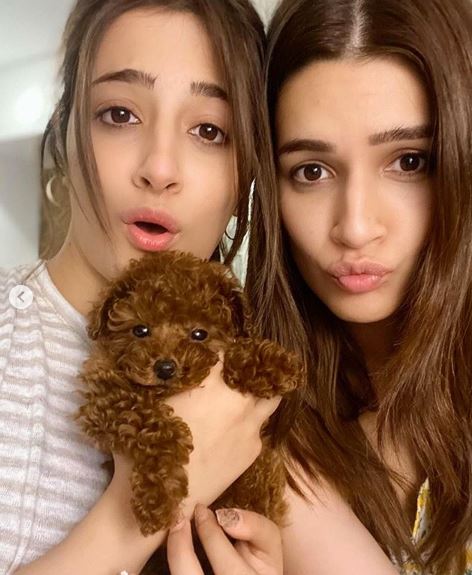 In an interview with News 18, Nupur had spoken about her sister, Kriti, and had revealed that she is very protective of her and sometimes acts like her mother. She had also added that apart from complimenting her efforts, Kriti is very honest in pointing out her flaws too. She had also retorted, "Whenever Kriti compliments me about something, she also gives me some kind of negative feedback, because she is very protective and she is also like my chhoti mummy so." (Don't Miss: Rana Daggubati's 'It's Official' Photos With Miheeka Bajaj From Their Roka Ceremony Exude Happiness) We loved Kriti's new hair cut! What about you?