An Indian designer’s quest for finding the perfect bridal lehenga sent her on an enormous journey of designing it all by herself. And the result is an epic bridal outfit!

Her lehenga has not only become the talk of the town, but also the latest trend in the Indian bridal wear collection. Yes, we are talking about none other than the Mumbai-based fashion designer Kresha Bajaj, who very beautifully sculpted her entire love story on her bridal lehenga.

Kresha Bajaj Bride Got Her Love Story Stitched On 'Lehenga', Aced The Look In A Nude Shaded Outfit

Recommended Read: You Will Fall In Love With Mishkat Varma After Seeing Him Dance On His Sister's Wedding 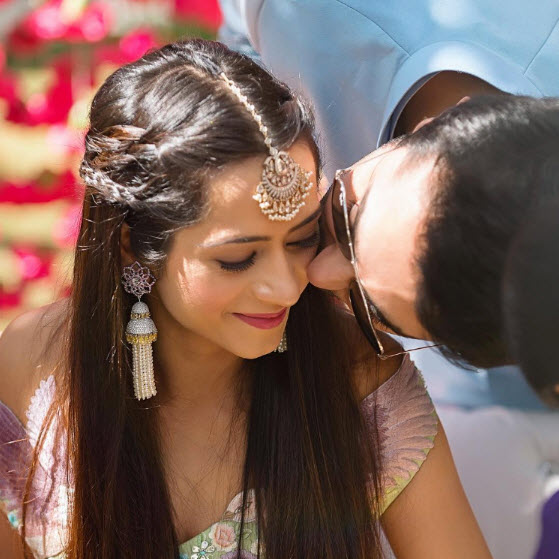 Kresha Bajaj recently married her beau, Vanraj Zaveri who hails from the lineage of the family that manages Tribhovandas Bhimji Zaveri & Sons. The two recently got married in an intimate ceremony at the 'The Leela Palace', Udaipur. 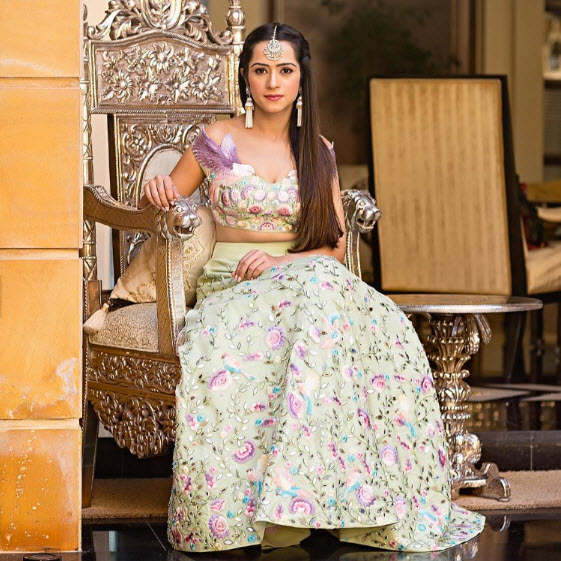 Kresha never wanted those jazzy and over the top lehenga for her wedding. She being a fan of edgy and non-traditional attires decided to design her own lehenga after her eyes not could not spot the perfect one. For this uphill task, one aspect was fixed that it would be in the white and golden theme as decided by Vanraj.

After watching an episode of the ‘The Real Housewives’, Kresha loved the idea of framing the wedding dress as a piece of art as done by the show star Adrienne Maloof. However, she thought if the dress has to be a piece of art, then it has to be something which you can look at every day, but never get bored. That’s when the idea of etching their love story on the lehenga germinated in her mind. 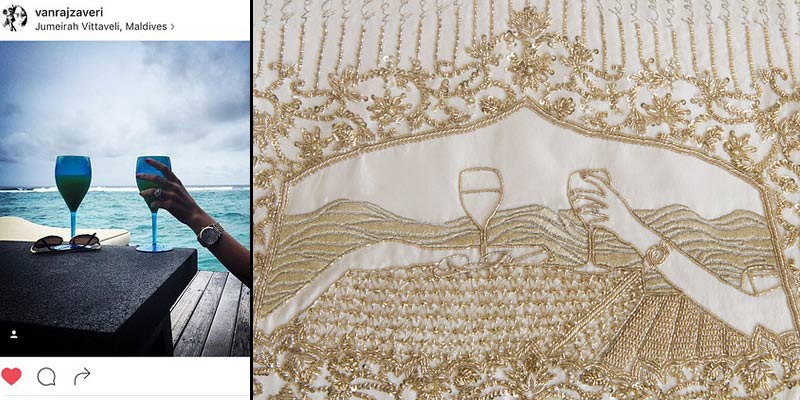 The lehenga encompassed the beautiful milestones of their life starting from when they met to their proposal to the wedding venue. Look how beautifully they have captured the moment of the proposal; two glasses of champagne with Kresha’s hands with the ring.

Check Out: 8 Real Brides Who Rocked The 'Red Lehenga' With Full Elan 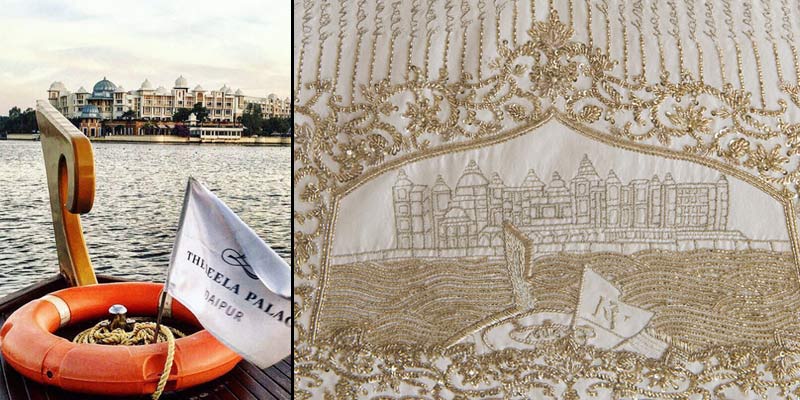 And how breathtaking does the scene of their wedding venue looks, The Leela Palace, Udaipur. It has been captured from the boat. The detailing and the designing are absolutely marvellous. 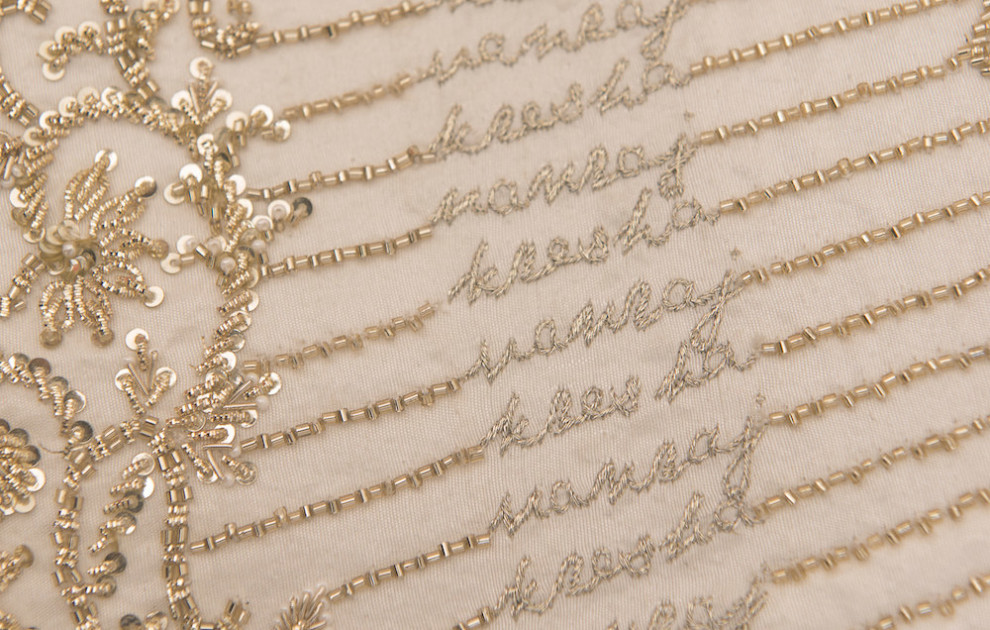 And if that is not enough, Kresha has carved their names in intricate zari embroidery in her lehenga.

Also, those beautiful jumping dolphins which form the hem of the lehenga is an ode to the first time they started working on a project against dolphin captivity. 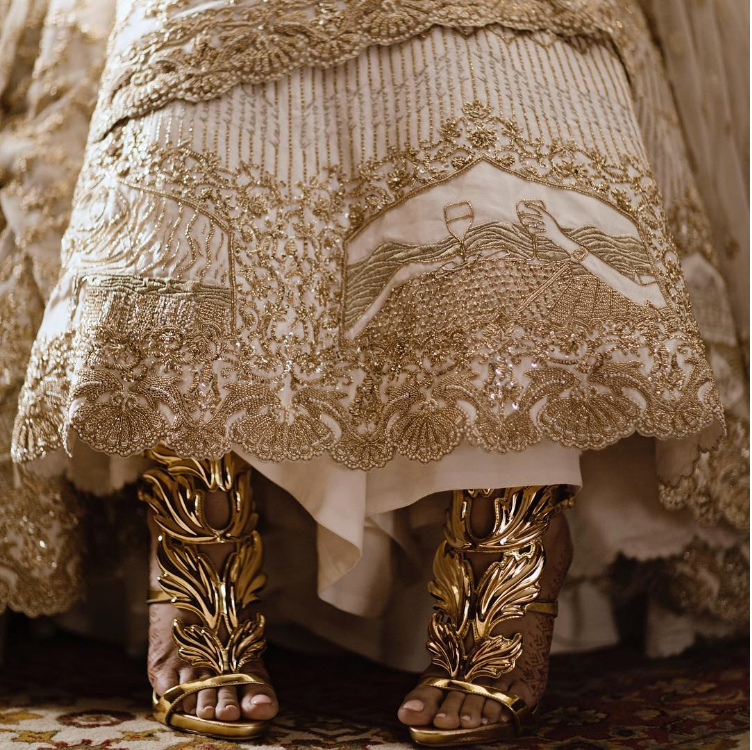 Do Check Out: 10 Solo Poses For Brides In Their Wedding Lehenga

And not just that, even her shoes speak about her creativity. 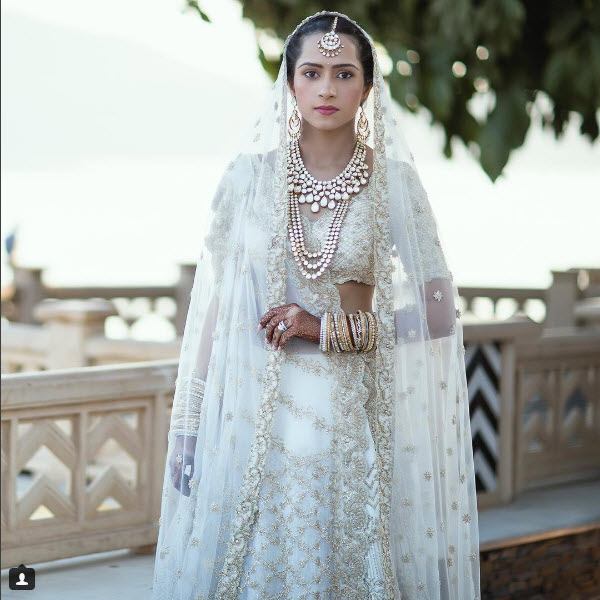 Kresha’s beautiful bridal lehenga was completed with kundan jewellery especially designed for her by Vanraj. Doesn’t she look mesmerising in this angelic trousseau and jewellery? 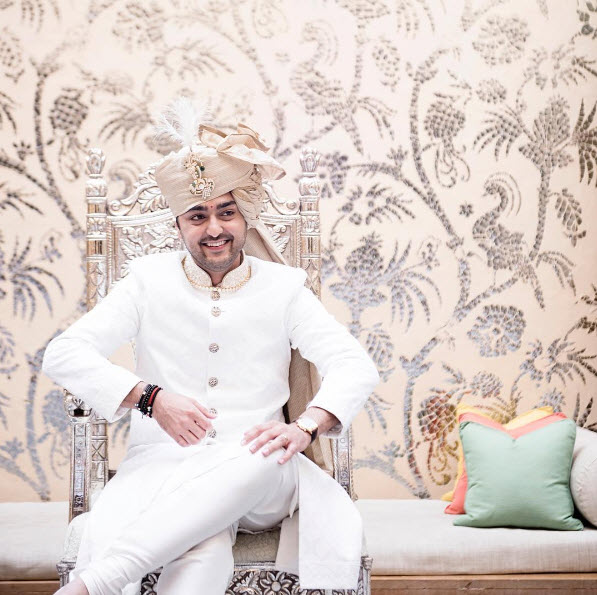 Going with the theme, the groom was also dressed in a white and golden sherwani. The design on his attire was in sync with the floral patterns of the bridal blouse. This sherwani looks simple yet elegant with those jeweled buttons. 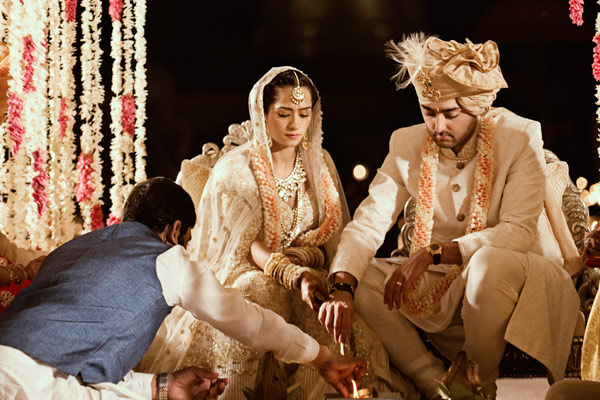 On her wedding day, nobody could actually make out the creativity in her lehenga, but as she narrated them to others, everyone was floored. In fact, many wannabe brides now want to have their love story sculpted on their wedding dresses. In fact, here is quite a lot of interest coming from London as well as Australia. Accepting the public demand, Kresha has started offering this service to other brides to help them make a lehenga of a lifetime. These custom made lehengas would range anywhere between 3.5 lacs to 12.5 lacs.

Recommended Read: Most Important Things Every Indian Bride Must Keep In Mind While Shopping For Her Wedding Outfit

Well, what more do we say? We are yet to get over of this fabulous and mind-blowing wedding lehenga. Isn’t this a beautiful and enchanting way to cherish those wonderful and everlasting memories?