KGF star, Yash's wife, Radhika Pandit shared a glimpse of their baby boy on her Instagram handle before posting his first full pictures. Take a look! 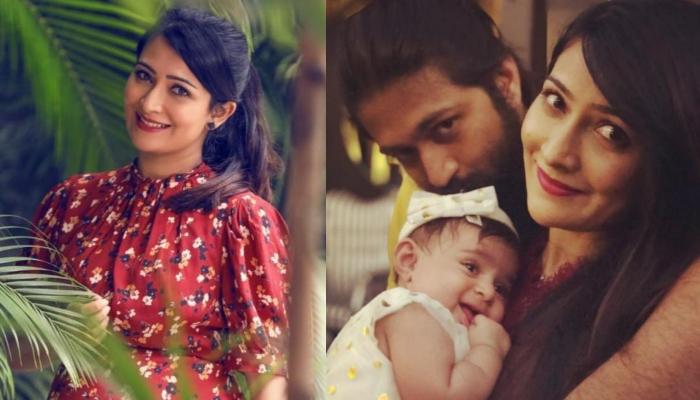 Yash and Radhika had started their journey being the best of friends and eventually had ended up falling in love with each other. The duo had tied the knot in the year 2016 and on December 2, 2018, they were blessed with a little angel, whom they had lovingly named 'Arya'. Since then, their life has revolved around creating a better world for their little one. But on October 30, 2019, Yash and Radhika had blessed with a baby boy in their lives. Radhika had delivered her second child at a private hospital in Bengaluru that completes the full circle of their sweet little family. (Recommended Read: Bipasha Basu And Karan Singh Grover Complete Four Years Of Marital Bliss, Share Heartfelt Wishes)

However, since then, we couldn’t get a full-fledged look at the baby boy but it seems like the time has come. The Kannada actress had recently posted a glimpse of her baby boy on Instagram revealing the news that soon she is dropping the first pictures of her little angel.

On April 29, 2020, Radhika Pandit took to her Instagram handle and posted a beautiful glimpse of her baby boy with his sister, Arya. In the adorable picture, we can see the baby girl adorably looking at her mother as she takes care of her younger brother sitting with his eyes closed. The beautiful picture has excited all their fans and they simply can’t wait to see the first full-frame pictures of the baby boy. In the caption section of the picture, Radhika revealed that she is going to upload all the pictures from little munchkin’s first professional photoshoot pretty soon as he turns 6-months-old today. Along with the picture, Radhika wrote a few lines in the caption that can be read as “The moment all of u were waiting for for.. Yes tomorrow, Junior turns 6 months!! He will be ready to greet u all.. are u guys ready for him!! #nimmaRP #radhikapandit P.S : Thanks Amrita for this memorable shoot! @mommyshotsbyamrita.” Take a look. (Don’t Miss: Gauri Pradhan and Hiten Tejwani Celebrate 16 Years Of Marital Bliss, Cut A Homemade Cake With Family)

For the uninitiated, Radhika's girl gang had organised a surprise baby shower bash for the actress. It was a bee-themed party and Radhika's daughter, Arya had also attended it. The actress had shared the pictures of the same on her Instagram handle and had written, "My girl gang threw a Surprise Baby shower for me!! It was fabulous with a Bee theme. Thank you to all the aunties to Bee for this BEE..AUTIFUL shower!! Love you guys." In an interview with The Times of India, Radhika had talked about her baby shower and had revealed that usually the traditional baby shower ceremony is only done for the first time. But her girl gang didn't want her second baby to be deprived of this beautiful ceremony and hence they hosted a surprise baby shower for her. She had also revealed that from her dress to her look, everything was pre-decided by her friends and they just took her to the venue. Take a look. (Also Read: Mira Rajput Kapoor Reveals How She's Keeping Kids, Misha And Zain Entertained And Happy In Lockdown)

Are you excited for the first pictures of the baby boy? Let us know!