Katrina Kaif's latest picture on her IG handle is doing rounds all over the internet for all the right reasons. Scroll down to know why!

'Kehte hain ishq aur mushq chhupaye nahi chhupta." And especially if it concerns our favourite Bollywood celebrities we find one way or the other to dig out some gossip about the same. Given our ability to sniff out news from social media, the probability of a celebrity successfully hiding their alleged affair is very low these days. And the actors about which we're talking today, have fallen into the trap numerous times. Scroll down to know more! (Recommended Read: 'Ishq Shava' Singer, Shilpa Rao Ties The Knot With Photographer Ritesh Krishnan, Shares First Selfie)

We still remember that episode of Koffee With Karan when the host, Karan Johar had told Vicky Kaushal that Katrina Kaif had said that she thinks she and Vicky would look good together on screen. Like an ardent fanboy, Vicky had drooled over the prospect of sharing the screen with Katrina Kaif and had made no attempts to hide the fact that he has a huge crush on her. What had started as a joke had gone on to become the talk of the town after the love birds had started making appearances together in parties, award function and lunch dates. Not many moons ago, during the lockdown in 2020, Vicky was even spotted outside Katrina Kaif's building!

Katrina Kaif's latest picture on her IG handle is doing rounds all over the internet for all the right reasons! The actress took to her IG stories and posted a beautiful, cryptic selfie, in which she seemed to be hugging someone. She also put butterflies filter over the picture like the ones in our stomach after discovering that the person she was hugging in the picture, could be, get this, Vicky Kaushal. The internet is flooded with the collages of pictures of the two, with fans expressing their excitement over Vicky and Katrina's possibility of making their relationship public soon.

This is not the first time Katrina Kaif and Vicky Kaushal have let their guards down. On January 4, 2021, Katrina had shared a picture on her IG stories with her friend, where she could be seen playing a board game, covering her head with a hoodie. While she was engaged in the game and had added “sweater weather” sticker and had written, “sequence mafia” atop it, her fans had apparently found Vicky Kaushal in the reflection on the glass window behind her. Although Vicky was not clearly visible in the reflection, the silhouette had looked exactly like him. And Katrina had almost confirmed our speculations by deleting the picture later. (Also Read: BB 14: Eijaz Khan Reacts To Paras Chhabra Slamming And 'Bad Mouthing' His Ladylove, Pavitra Punia)

On August 26, 2020, amidst their dating rumours all over the internet, we had spotted a similarity in Vicky Kaushal and Katrina Kaif's posts. Both of them had posted pictures in what had appeared to be the same white hoody! Katrina had paired the hoody with white denim shorts and holding an umbrella, she had written in the caption, "When it rains, I share my umbrella. If I have no umbrella, I share the rain." Vicky was seen chilling in his house watching some web series in the hoody. The white hoody in question looks almost the same in both the pictures.

Vicky Kaushal had addressed his dating rumours with Katrina Kaif in an interview with the Mid-Day and had said, "There are no cons to dating. It's a beautiful feeling." On being asked about being clicked with Katrina Kaif most of the time, he had retorted "I understand that the paps are doing their job. I also understand that people have an interest in our personal lives, by the virtue of us being public figures. That's fair. But it's completely up to me if I wish to share. I am not comfortable opening up my personal life for discussion. It's important to me that I guard the good things." (Don't Miss: Nakuul Mehta And Jankee Parekh Celebrate Their 9th Wedding Anniversary, Actor Calls Her 'My Home')

What do you think about Vicky Kaushal and Katrina Kaif's jodi? 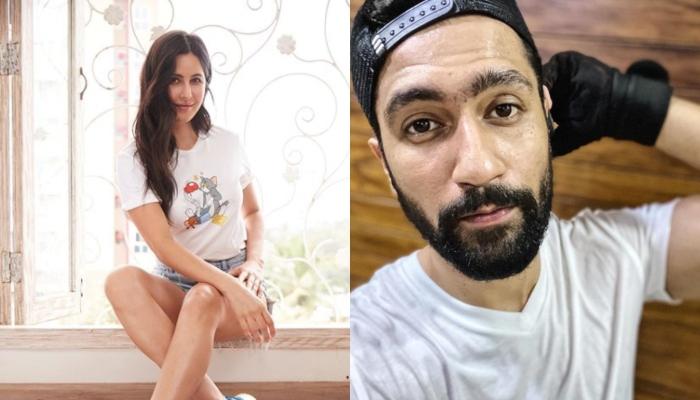 Do you remember Karan Johar's show, Koffee With Karan season 6's episode, wherein Karan Johar had told Vicky Kaushal that Katrina Kaif thinks that he will look good with her on-screen, and Vicky had drooled like a fanboy? Since then, the gossip columns are going at full capacity about rumours of their alleged affair.