Katrina Kaif shared a picture from her childhood days and mentioned her fashion sense in the caption. However, her husband, Vicky Kaushal's reaction was unmissable. Check out!

Bollywood stars, Katrina Kaif and Vicky Kaushal had tied the knot in a super-secretive wedding on December 9, 2021. Since then, the duo's mushy PDAs and cute romantic banter are winning millions of hearts of their fans. For the unversed, finally, after getting a break from their busy schedules, in March 2022, they had gone for a honeymoon in the midst of the Indian ocean.

Vicky Kaushal and Katrina Kaif's glimpses from their beach vacation had set pure couple goals. Later, Katrina was papped at the airport when she had arrived from her vacation. In the pictures and videos uploaded by various media pages, the actress was seen wearing a comfy cotton kurta palazzo set paired with a matching dupatta. But as soon as the pictures went viral on social media, her fans had become curious speculating if the actress was pregnant. Taking to the comment section, some of Katrina's fans had showered heaps of love on her, however, many had also asked about her pregnancy. Check out!

Recommended Read: Neliima Azeem Gives An Extra Badge To Her Sons, Shahid And Ishaan For Not Becoming 'Losers' A few hours ago, Katrina Kaif shared a picture of her younger days while she was playing with a goat amidst the greens. In the picture, the actress was seen wearing an oversized denim jacket. She teamed her look with a neatly back brushed and pinned hairdo and accented her look with hoop earrings. As soon as Katrina shared her childhood days picture, her hubby, Vicky Kaushal couldn't stop himself from reacting to it. He took to the comment section and dropped a heart emoji. And while sharing the picture, Katrina wrote:

"Doing oversized even back then." However, not only Vicky but also his wife, Katrina never misses a chance to shower heaps of praises on her dealing husband's success. So, on April 26, 2022, Katrina had taken to her IG stories and had shared a cutesy screengrab of Vicky's success story of his film, Udham Singh. Vicky's film had won three awards at IIFA 2022, and sharing the same news, Katrina had tagged her hubby, Vicky and had added three heart emojis atop it. Soon, Vicky reshared the story, and along with it, he had pasted a teddy kissing GIF, and this was simply unmissable!

Also Read: Rakhi Sawant Shares A Painful Video Of Removing Tattoo Of Her Ex-Husband, Ritesh From Her Body Katrina Kaif is performing all the duties of being a wife with complete dedication. On April 10, 2022, Katrina had shared a picture of a dish on her IG stories, which had shown a plate full of scrambled omelette garnished with some tomatoes, and it had looked delicious. Atop it, she had mentioned that she had cooked it for her darling husband, Vicky Kaushal. Katrina's note could be read as:

"Sunday breakfast for hubby made by .... meeeeee." 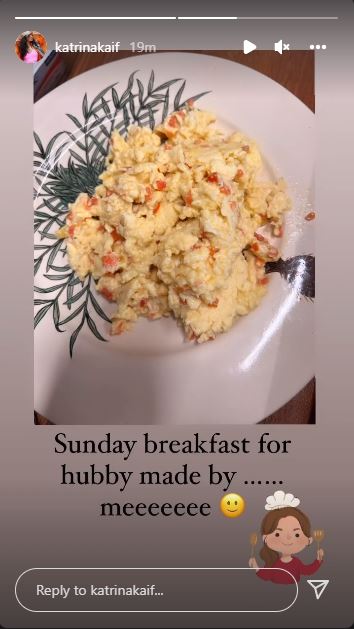 We love Vicky's way of showering love on his wife, Katrina!