'Mentalhood' actress, Karisma Kapoor has revealed in her recent interview that she isn't her kids, Samaira and Kiaan's favourite actress. Find out! 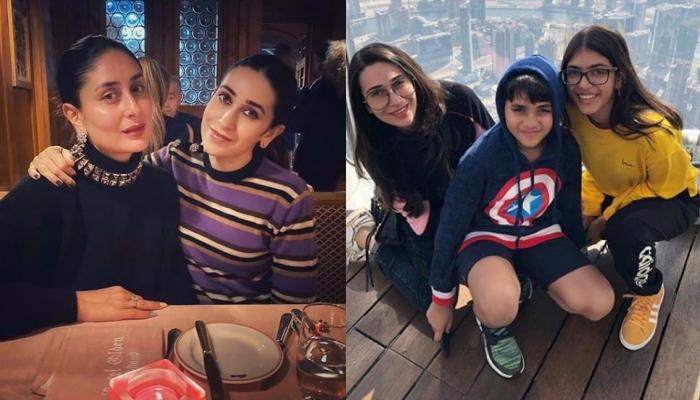 Getting better with age is a dream that every person has in his/her heart, but only a few hardworking souls are able to achieve it in terms of physical fitness and profession. There are lots of names in the Bollywood industry right now that clearly show that age is just a number and has nothing to do with the talent of a person. One such actress, who has come out of retirement to blow us off with her impeccable fitness and acting, is Karisma Kapoor. The actress has recently made her streaming debut with Ekta Kapoor’s web series, Mentalhood. (Recommended Read: Kareena Kapoor Khan Clicks Her Hubby, Saif Ali Khan's Picture, Reveals He's Booked For The Week)

Well, we all know that Karisma Kapoor was one of the finest actresses of her generation and is still going strong. With so many mega-budget and blockbusters in her kitty, she is no less than a filmmaking institution for the beginners and the younger crop of Bollywood. However, in her recent interview, Karisma Kapoor has hilariously revealed that she isn’t her kids, Samaira and Kiaan’s favourite and no wonder this is every actress mother’s problem.

In an interview with Curly Tales, when Karisma Kapoor was asked, whether she is her kids’ favourite actress? The actress replied with a smile and revealed that her kids’ prefer their aunt, Kareena Kapoor Khan instead of her. She said, “I don’t think so. I think its Bebo.” Adding to her statement, she further revealed that her kids’ haven’t even watched her films too much. She added, “They don’t watch my movies and I don’t force it on them. They have watched a few and I like it that way. It’s fine.” Well, it's gracious and beautiful from Karisma Kapoor but this isn’t a big surprise to be honest because that’s how big a heart mother holds for her kids. (Don't Miss: Anushka Shetty Calls Prabhas Her '3 AM Friend', Reveals The Reason Why They Have Been Linked So Much)

This isn’t the first time when Karisma Kapoor had talked about her kids, Samaira and Kiaan in an interview and had revealed something surprising about their relationship. During a conversation with the DNA, she had talked about her experience undergone post-motherhood. She had explained, “Motherhood completely changes you as a woman and your whole focus becomes your children, which I love and enjoy a lot. So I think these small initiatives which we can be a part of, which also help our children and family, means a lot. In a certain way, yes. It has altered my choices in life.” Karisma had further stated that work wasn’t a priority for her at that time as she had added, “Work is secondary for me as a mom. It’s all about rushing back home and being with my kids. My housemaid was just calling me (laughs). So definitely, it’s a matter of my choice and I choose to do that.”

In the same interview, when Karisma was asked about her bond with her daughter, Samaira, the doting mother had revealed that she is more of a friend with her right from the start and had revealed that she is her fashion critic in the truest sense. She had stated, “Well, my daughter Samaira is my biggest fashion critic. (Laughs) When I dress up for events, if she doesn’t like what I’m wearing, she will be like, ‘Mom, change these shoes. I don’t like it.’ She has great fashion sense and she completely participates in everything.”

No wonder, we all are proud of the way Karisma is fulfilling the role of a single mother and taking care of her professional life too. The first episode of her recently-aired web series, Mentalhood had perfectly depicted the struggles of modern mothers. In an interview with the IANS, Karisma had talked about it and revealed, "It (acting) is ingrained in you. It is something that never goes away. I was waiting for something really interesting. It was out of my choice that I didn't do any film because my kids were very young. It was out of choice that I wanted to be at home with my family and children." (Also Read: Ranbir Kapoor's Mom, Neetu Kapoor's Unmissable Reaction On Alia Bhatt's Childhood Pictures)

Have you watched, Karisma’s web series, Mentalhood? Let us know!