Kareena Kapoor Khan shared a super cute conversation with her best friend, Amrita Arora to wish her on her birthday and it is absolutely unmissable.

Friends are an essential part of our lives. They help us to get over all difficult times easily. And Bollywood friendships are always looked up to for great inspiration. One such B-Town girl gang includes Kareena Kapoor Khan, Amrita Arora, Malaika Arora, Karisma Kapoor. They are often seen hanging out together and setting friendship goals.

On December 7, 2021, Rhea Kapoor had hosted a pre-Christmas dinner party for her girl gang, including Kareena Kapoor Khan, Karisma Kapoor, Malaika Arora, Amrita Arora and others. In the photos, Kareena Kapoor Khan had looked like a boss lady as she had donned a denim shirt and matching black pants. On the other hand, her sister, Karisma Kapoor, had worn a shimmery green dress for the party. While Amrita Arora wore shorts and a T-shirt, paired with a jacket, Malaika Arora kept it simple in a white kurta. Masaba Gupta and Naina Sawhney also graced the party. 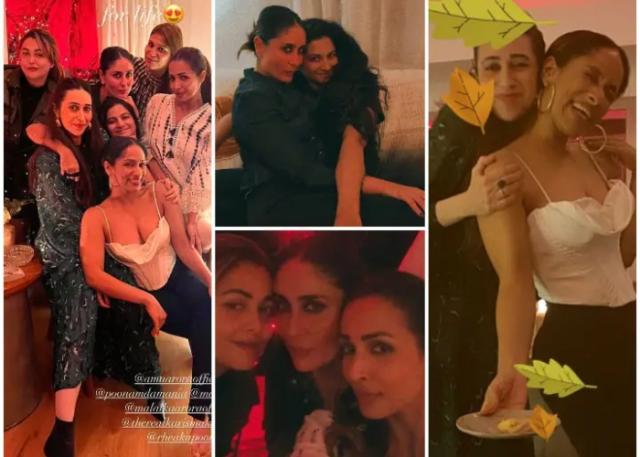 Kareena Kapoor Khan is one such person who knows how to add value to each relationship. To mark Amrita Arora's birthday, 'Bebo' took to her Instagram handle and shared a super cute conversation with her best friend, Amrita. Sharing a monochrome picture of Amrita, Kareena revealed their funny afternoon nap story. Her caption canbe read as:

"3.30pm…Beboo-KP?as in Kya plan hai? Amu-Gonna nap bro. Beboo-me too..one eye is already shut… Amu-will wake up and have chai and toast. Beboo-me too. A friend who understands the power of afternoon naps…is a keeper. Happy birthday to my darling BFF…here’s to working out together,wine, cheese, Palak soup and ummmm virtual holidays. Life is so much more fun with you in it. @amuaroraofficial" 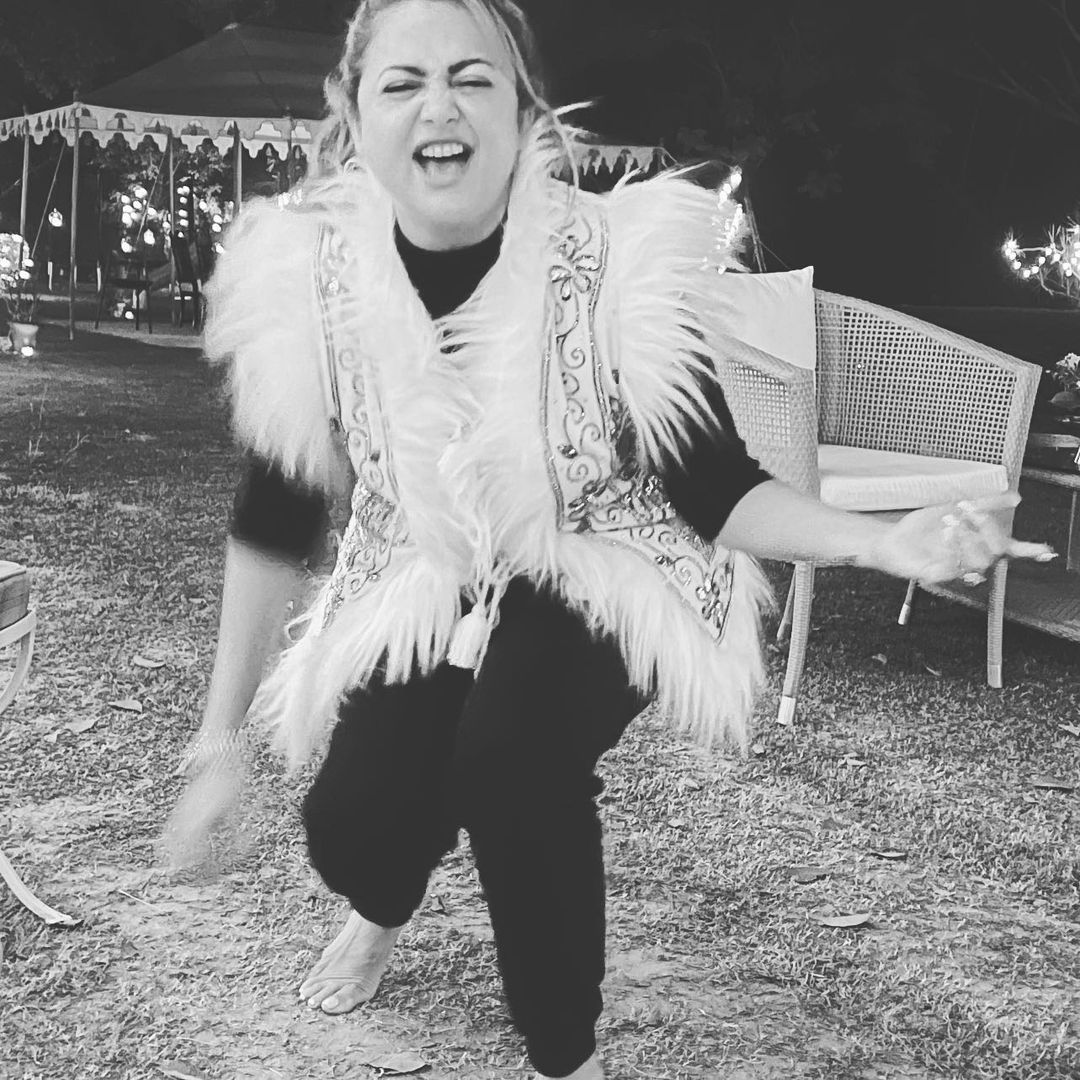 As soon as, Kareena posted the conversation, Amrita Arora filled the comment section by showering love. She wrote, "Love you. Hahahahhahaha beeboooo." The other divas from their girl gang also took to the comment sections and showered love. 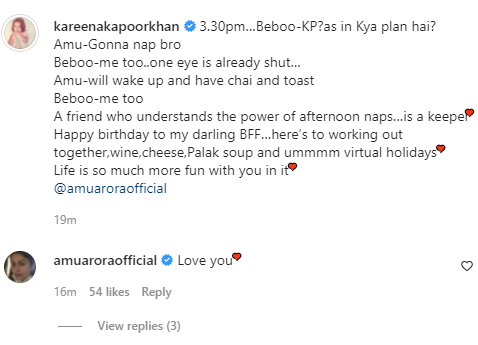 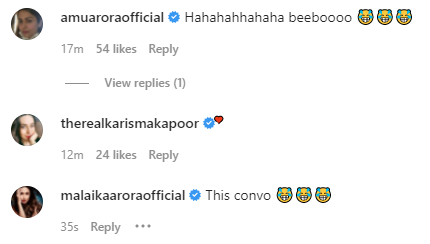 A few hours ago, Kareena Kapoor Khan took to her Instagram stories and shared a series of pictures from Amrita's birthday party. In the pictures, Kareena was seen in a black dress twinning Amrita. Malaika Arora and Karisma Kapoor were also present. The gorgeous ladies were seen hugging each other close while posing for a picture. Kareena captioned the picture as:

"Happy Birthday to my BFF. No one like you. This is us." 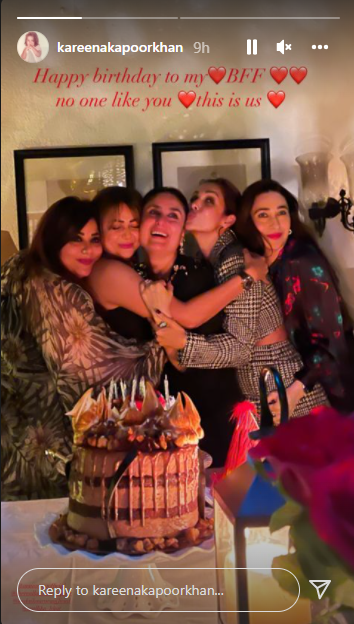 All the divas were seen wearing red birthday caps in the following picture, and Amrita Arora was seen cutting her birthday cake. Atop it, Kareena wrote: 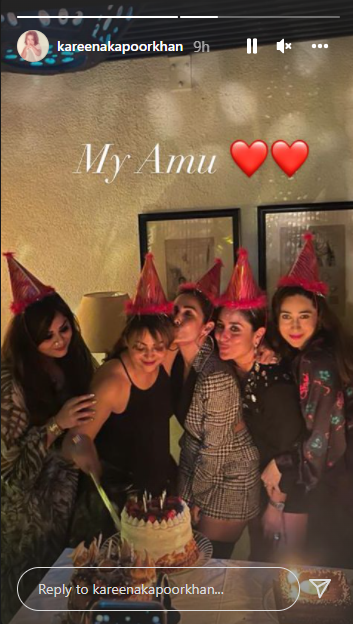 On December 7, 2021, Kareena Kapoor had shared an array of pictures on her IG stories where some snacks were kept on a coffee table and had been decorated with candles. Atop it, she had written, "It's started...uffff." In another picture, Rhea had been seen enjoying her meal on the sofa, and Kareena had written,

"@rheakapoor giving her take", atop it.

"One woman show what a meal GOLD. Thank you my darling Rhea #veeres for life." 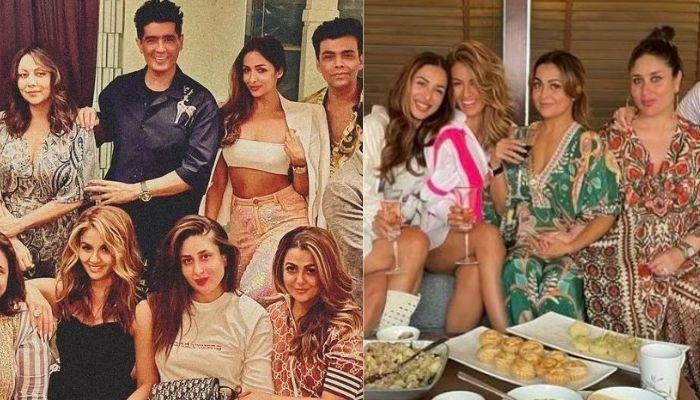 The biggies of Bollywood share a close bond and are often spotted parting together. It looks like the weekend is well celebrated in the house of Bollywood stars as every other weekend we spot the celebrities reuniting and having a gala time. Kareena Kapoor Khan and her girl gang is