To wish Armaan Jain on his 30th birthday, his cousin, Kareena Kapoor Khan posted a throwback picture of him with Taimur Ali Khan from the Ganesh Chaturthi 2019 celebrations. 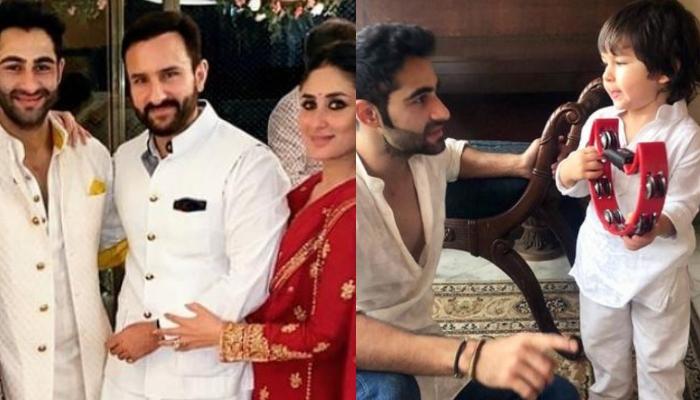 Armaan Jain, the grandson of Raj Kapoor and son of Rima Jain and Manoj Jain, had made his Bollywood debut in 2014 with the film, Lekar Hum Deewana Dil and had also worked as an assistant director in the films, Ek Main Aur Ekk Tu and Student of the Year. Though Armaan failed to create his niche in the Bollywood industry, his personal life has always been a topic of discussion for the Kapoor fans. 2020 had begun with a bang as Armaan Jain’s union with his fiancee, Anissa Malhotra had marked to be the first grand celebrity wedding of the year. Keeping in mind that it was Raj Kapoor's grandson and Karisma Kapoor and Kareena Kapoor Khan's cousin brother, Armaan's wedding, #AnissaMaanGayi had taken the internet by storm and was nothing less than extravagance! (Also Read: Suhana Khan Misses Her Cousin, Alia Chhiba, Flaunts A Dress She Had Borrowed From Her Mom Gauri Khan)

February 3, 2020, was when Armaan Jain had gotten hitched to his childhood sweetheart, Anissa Malhotra at The St. Regis, Mumbai. Other than the bride and groom, every Jain-Kapoor member had made us swoon over the big-fat Punjabi wedding and #AnissaMaanGayi had grabbed everyone’s attention back then. But it was the youngest member of the family, Taimur Ali Khan, who had taken our hearts away with his oodles of cute charm in a blue kurta by Raghavendra Rathore. From dancing at his mamu, Armaan’s baraat while piggybacking on his father, Saif Ali Khan’s shoulders to his suave poses with mommy, Kareena Kapoor Khan, Taimur had surely stolen the show!

As Armaan Jain turned 30 on November 25, 2020, the Kapoor family showered him with love and good wishes on social media. Armaan had jetted off to the Maldives with his wife, Anissa Malhotra Jain to celebrate his first birthday post-wedding. To wish Armaan on his birthday, his cousin, Kareena Kapoor Khan posted a throwback picture of him with Taimur Ali Khan from the Ganesh Chaturthi 2019 celebrations. Kareena captioned the picture as “Happy birthday to my sweetheart of a brother @therealarmaanjain... we love you loads golden hearted boy” followed by hearts and balloons emoticons. While Armaan commented on the post, “@kareenakapoorkhan Thank you love you”, his wife, Anissa replied, “Best pic”.

To wish Armaan Jain on his 30th birthday, Anissa Malhotra Jain posted a twinning picture from their Maldives vacation. Wishing her superstar and praising him with kind words, Anissa captioned the post as “Must’ve done something very right to get you as my husband and best friend. To the man who is ALL HEART, you light up every room and touch every heart. Happy 30th my superstar, the world is a better place because of you.” Armaan replied to Anissa’s wish, “@anissamalhotrajain Love you my jaaaaan” followed by heart emoticons. (Also Read: Karan Mehra And Nisha Rawal Celebrate 8th Wedding Anniversary, Share Photoshoot Pictures With Kavish)

To mark Ganesh Chaturthi 2019, Kareena Kapoor Khan, Karisma Kapoor, Babita, Hiroo Johar, Armaan Jain and his then-fiancée, Anissa Malhotra along with kids, Kiaan Raj Kapoor, Taimur Ali Khan, Roohi Johar and Yash Johar had come together at Rima Jain’s home to seek blessings from Lord Ganesha before bidding him adieu. Karisma had shared glimpses from the celebrations and in one video, we had spotted baby Tim chanting ‘Mangal Moorti Morya’ with his mamu, Armaan and cousin, Kiaan! Karisma had captioned the video as “#ganpatibappamoriya #family @therealarmaanjain @anissamalhotra @rimosky.”

In a post-wedding ‘Ask Me Anything’ session on Instagram, Anissa Malhotra Jain had interacted with her fans and answered a lot of questions about her wedding with Armaan Jain. When Anissa was asked about her favourite memory from the wedding, she had replied, “First dance as husband and wife.” Recalling her favourite moment from the wedding, Anissa had reminisced, “We are blessed that our whole wedding was made of special moments. But the varmala in particular was super special because it’s the first moment we saw each other as future husband and wife. And, our friends made it so much fun by lifting us up to put garlands on each other.” (Also Read: Shilpa Shetty's Hubby, Raj Kundra Shares A Selfie With Her, Pens An Advice For Every 'Single' Person)