Kareena Kapoor Khan is massively trolled for wearing a t-shirt worth Rs 50,000 as she stepped out to resume the shoot of her upcoming film, 'Laal Singh Chaddha'.

Kareena Kapoor Khan is a fashionista, who can rock any outfit, be it worth lakhs or thousands. Her fashion choices often make heads turn and inspire people. However, netizens always have a say in whatever she wears. Kareena is quite familiar with trolling because often her actions invoke a reaction from social media users. Be it getting trolled for her kids’ names or for her bold statements, Kareena has faced it all. This time her t-shirt worth Rs 50,000 has become the talk of the town.

Kareena Kapoor Khan is a mother of two adorable munchkins. Despite being a mommy, she has still maintained her ‘Poo’ vibes! It was in 2012 when Kareena had added 'Khan' to her name after her nikaah with Saif Ali Khan. Four years later, in December 2016, they had welcomed their first child, Taimur Ali Khan. After more than four years, in 2021, Taimur became an elder brother when Kareena and Saif had welcomed their second child, Jehangir Ali Khan, into their lives. Kareena Kapoor has resumed the shoot of her upcoming film, Laal Singh Chaddha. A part of the film was shot when she was pregnant with her second son, and now, Kareena is back on the set after her delivery. The actress was spotted in Mumbai, wearing a simple white graphic t-shirt from the luxury fashion brand, Gucci. She paired her tee with black tights, matching boots and orange sunglasses. Well, the cost of her t-shirt will leave you dumbfounded as it costs Rs 50,000.

Well, it was enough for the netizens to troll Kareena Kapoor Khan because for a layman, spending Rs 50,000 on a t-shirt is farfetched dream. While one social media user commented, “Itne me to 500 kharid lu,” another one wrote, “Sarojini market me 350 me available hai doston! Gazab kharab vyavastha hai.” Another user poked fun and wrote, “Isko mei next year holi pe pehnu.” Check out the hilarious comments below: 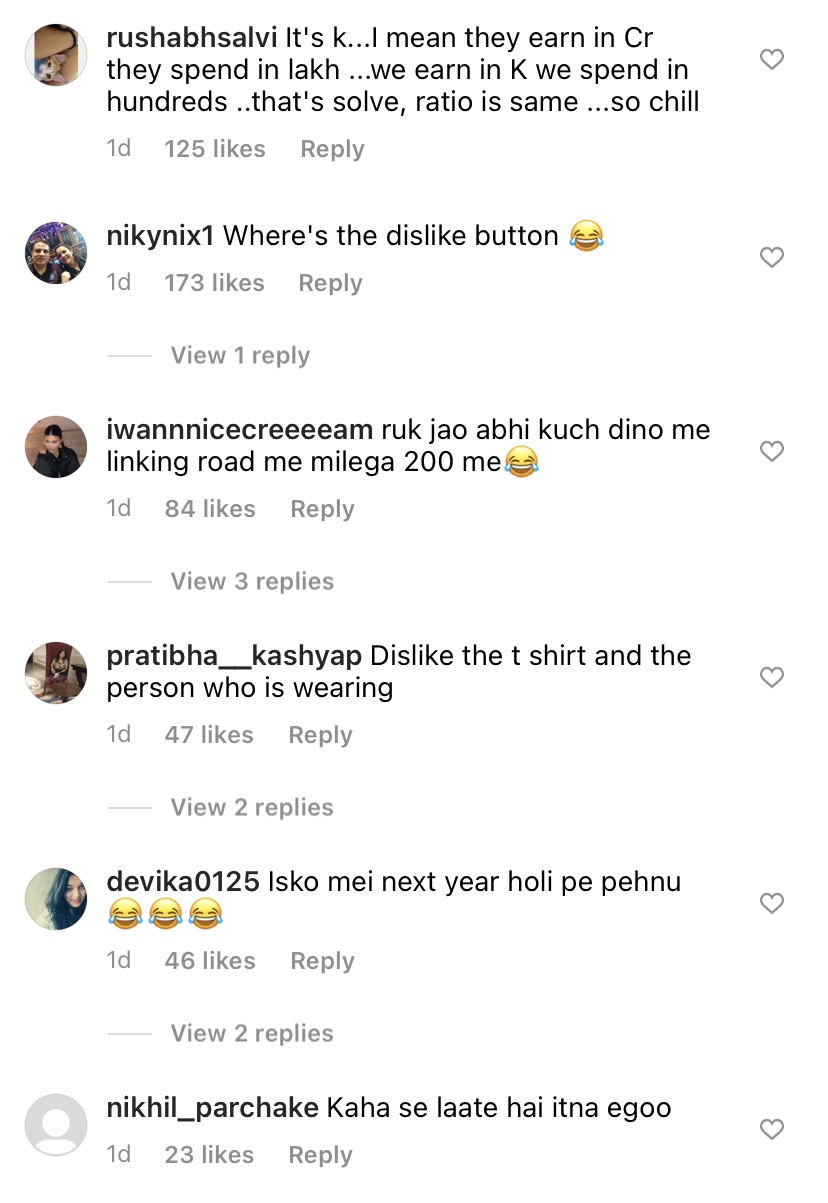 In March 2021, Kareena was spotted outside her sister, Karisma Kapoor’s house as she had arrived there to meet Lolo. The actress was seen wearing the same comfortable white t-shirt with black track pants. She had completed her look with no makeup and loose hair. We had loved how Kareena had nailed her effortless look, however, the price of her t-shirt had come as a shocker. Kareena Kapoor Khan’s off-white, short sleeve, jersey style, rib-knit ‘Original Gucci’ Bear t-shirt costs around $690, which approximately costs Rs 50,103.

The Kapoor siblings, Kareena Kapoor Khan and Karisma Kapoor had collaborated on a ‘special’ new project and on July 22, 2021, Lolo had shared a picture from the same on her IG handle. In the photo, the sisters were seen laughing their hearts out. While Lolo had donned black pants with a green top, Kareena had opted for a coral coloured satin wrap dress for the shoot. A fan page, Know their fashion, had shared a picture of Kareena’s dress and had revealed that the dress is from the brand, Zimmermann and costs Rs 50,558. 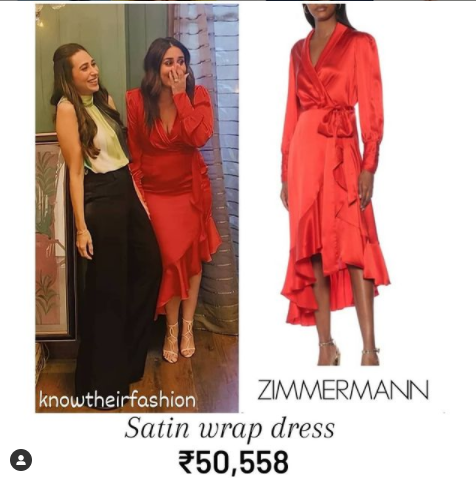 What are your views about Kareena Kapoor Khan’s t-shirt worth Rs 50,000?

Next Read: Price Of Urvashi Rautela's Jewellery Collection Almost Equals To The Cost Of An Audi Q2 [See Video] The Kapoors are known for their lavish celebration and get-togethers. For the unversed, Raj Kapoor's three sons, Randhir Kapoor, Rishi Kapoor and Rajiv Kapoor's family members share an unbreakable bond with each other and never miss a chance to celebrate each festival altogether. Thus, to celebrate the festival of Raksha Bandhan