Kareena Kapoor Khan is expecting her second child anytime now and just a day ahead of her due date, the actress is spotted shooting in the city with her team. Check out!

Kareena Kapoor Khan has taken the pregnancy phase standards by the storm as she has been setting a new benchmark every other day. Her two pregnancies have definitely changed the pregnancy standards in India and have inspired every expecting woman to do what pleases them till the last day of their delivery. Not just Kareena has changed the maternity fashion for the expecting ladies, but also she has motivated them to work out and to fulfil their professional commitments during their pregnancy phase. Just when we thought that Kareena might be finally taking a break from the work, the actress proved us wrong. (Also Read: Bigg Boss 14: Rubina Dilaik's Hubby, Abhinav Shukla Opens Up On Their Divorce And Families' Reaction)

For the unversed, Kareena Kapoor Khan and Saif Ali Khan had announced the good news of their second pregnancy in August 2020. Their joint statement could be read as "We are very pleased to announce that we are expecting an addition to our family!! Thank you to all our well-wishers for all their love and support. Saif and Kareena." Ever since then, the media and her fans have been crazily drooling over Kareena's maternity fashion, fitness approach and everything else that the expecting mommy has been doing.

Kareena Kapoor Khan Narrates Her 'Working On A Period Day' Story, Opens Up On 'Period-Leave' Debate A few hours back, Kareena was spotted in the city by the paps looking gorgeous in a white t-shirt and trouser. Her pregnancy glow and the happiness to have her baby in a few days was quite evident on her face as she was walking with her team. Along with Kareena, we could easily spot Tanya Ghavri and Mickey Contractor, the core of her team and it looked like she was out for some shoots. Well, Kareena is working even a day ahead of her due date and we are in awe!

It was Kareena Kapoor Khan's father, Randhir Kapoor, who had revealed the actress's due date in an interview with the Bollywood Bubble. According to the doting father, Kareena's expecting date is somewhere around February 15, 2021. Randhir ji was quoted as saying, "She is due around 15th February." In a conversation with Times Now Digital, Kareena was asked about the biggest lesson she had learnt in her first pregnancy that is helping her in her second time. Sharing the difference between her first and second pregnancies, Kareena had said, "I guess I am more prepared and confident this time around. I was quite nervous and jittery since I was going to turn a mother for the first time. This time around, I am way calmer and thankfully, I am not going berserk yet." (Recommended Read: Anita Hassanandani Finally Shares The First Family Photo With Her Newborn Son And Hubby, Rohit Reddy) 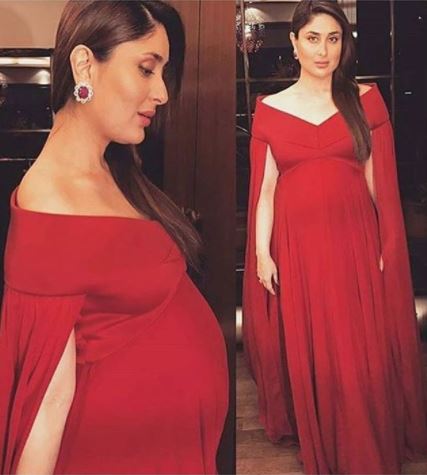 A few days ago, a video from Kareena Kapoor Khan's shoot had gone viral over the internet as the expecting mommy could be seen caressing her baby bump and loving her soon-to-arrive child. Kareena could be seen wearing a pink gown with grey stripes on it for the shoot. Amidst the shoot, the actress could be seen lovingly looking at her baby bump and caressing it, and it had almost looked like she had felt an immediate rush of love for the baby and it was not at all for the camera. Kareena had also shared a Boomerang from the same shoot, holding her baby bump in a powdered blue gown and had written, "9 months and going strong #NotGivingUp #FunTimes #BTS." (Don't Miss: Mohit Malik's Pregger Wife, Aditi Shares How Daadu-To-Be Talks With The Soon-To-Be-Born Baby)

We cannot wait to get the ‘good news’ of baby number 2 from the Kapoor-Khan khandaan!

Ahead Of Delivery, Mommy-To-Be, Kareena Kapoor Khan Gives A Glimpse Of Yummy Food In Her Tummy 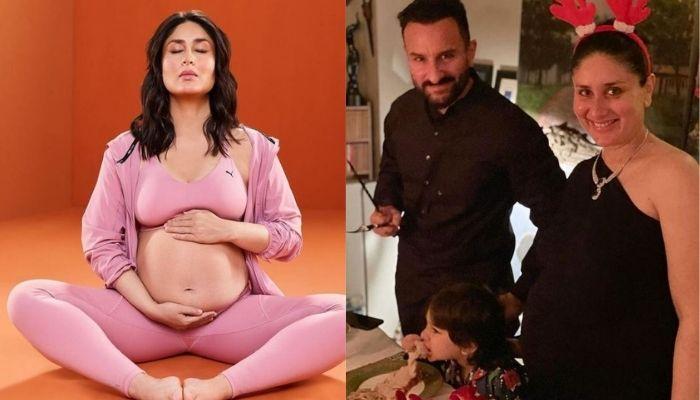 The fashion queen of Bollywood, our very own Poo, and the chhoti begum of the Pataudi Khaandan had announced her second pregnancy in the month of August 2020, at the age of 40. Since then, all Bollywood buffs have talked about is Kareena's maternity fashion, her pregnancy glow, her diet, her shooting schedule and