We cannot stop gushing over Kareena Kapoor Khan's maternity fashion. The actress gives another perfect inspiration to expecting ladies as she steps out in the city in an a-line 'kurta'!

It was on August 12, 2020, when Kareena and Saif had released an official statement announcing that their son, Taimur is soon going to be a big brother. Kareena and Saif had confirmed the news of their second pregnancy and had stated that they were pleased to announce that they are expecting an addition to their family. The couple had also thanked their well-wishers for all their love and support. Ever since the news of the couple’s second pregnancy was confirmed, we cannot stop but wait for Kareena to step out so that we can get a glimpse of her baby bump and maternity fashion. (Also Read: Karanvir Bohra Tries To Eat Pregnant Wife, Teejay's Food, Kids, Bella And Vienna Comes To Her Rescue)

Kareena Kapoor Khan’s maternity looks have become the talk of the town, owing to her comfortable yet stylish looks. During the lockdown period, while the nation was gushing over Kareena’s kaftans, little did anybody thought that she was hiding her pregnancy, keeping herself comfortable. Post the announcement, Kareena’s every outing and selfie has been breaking the internet for her gorgeous pregnancy glow, baby bump and her maternity fashion. Her fashion choices have become an inspiration for every expecting woman. As Kareena is working during her pregnancy, she is often spotted in the city, sometimes stepping out of her home, sometimes on her shoot locations. On October 28, 2020, Kareena was spotted stepping out of her house in a pink coloured a-line kurta with foil print over it and looked like a royal princess. She kept her half hair tied at the back, and even with the mask, her pregnancy glow was unmissable. Despite the flowy kurta, her five-month baby bump can easily be spotted, making her look more alluring. Kareena’s outfit again makes her the queen of maternity fashion. Take a look: 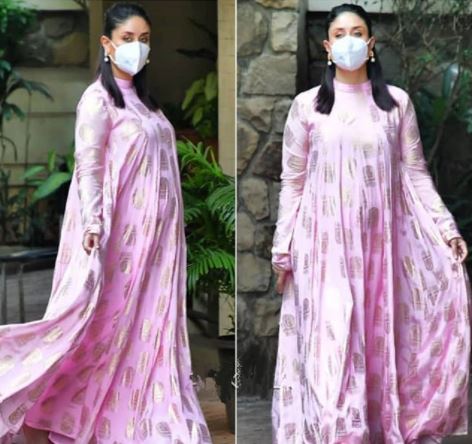 It was yesterday only when we had found glimpses of the Kapoor sisters, Kareena and Karisma indulged in a shoot at former's home. Bebo had looked gorgeous as ever as she had flaunted her baby bump in a white t-shirt, while Lolo had twinned with her in the same. Karisma had taken to her IG handle and had posted a BTS Boomerang video and had captioned it as "Working with the sis always the best. #sistersquad. #behindthescenes." In other videos that we had found, Kareena and Karisma had donned a grey turtle neck jacket they were lost in their conversation. (Don't Miss: Kamya Panjabi Wears The Same Dress From Her First Meeting With Hubby Shalabh For His Birthday Dinner)

A few days back, Kareena was spotted in the city, running some errands and her comfortable yet stylish maternity look had won our hearts. In the picture, we could see Kareena wearing a blue denim shirt with black leggings and a white mask. The actress had kept her look minimal and yet her pregnancy glow had blown us away. Her five-month baby bump had made her look even more gorgeous and the way she had held it while walking had given us a peek of a protective mother in her. 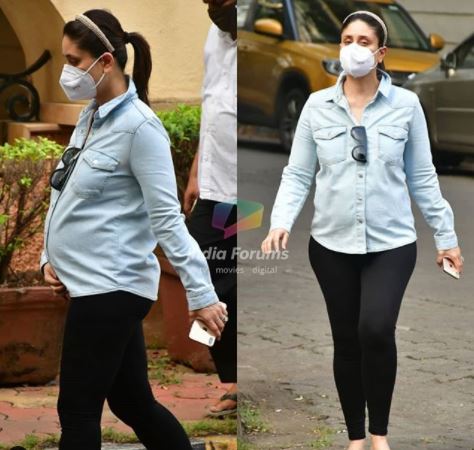 On October 18, 2020, Kareena had shared an advertisement video with her hubby, Saif Ali Khan on her IG handle. The actress had looked gorgeous in a purple and white, polka dot satin dress, leaving her fans stunned. The backless dress had highlighted Kareena’s baby bump and she had styled the look with simple hoop earrings and subtle make-up, leaving her hair loose. The gorgeous satin, v-neckline, bow dress that Kareena had worn for the commercial with Saif is from the brand Zara, and it costs Rs 3,614. Can you imagine Kareena’s maternity looks are super affordable? (Recommended Read: Shah Rukh Khan Gives A Savage Reply To A Fan Asking His Plans To Sell His Bungalow, 'Mannat') 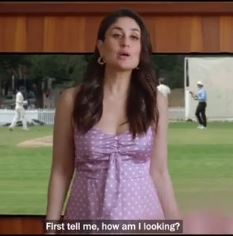 We are totally drooling over Kareena Kapoor Khan’s maternity fashion! What about you? 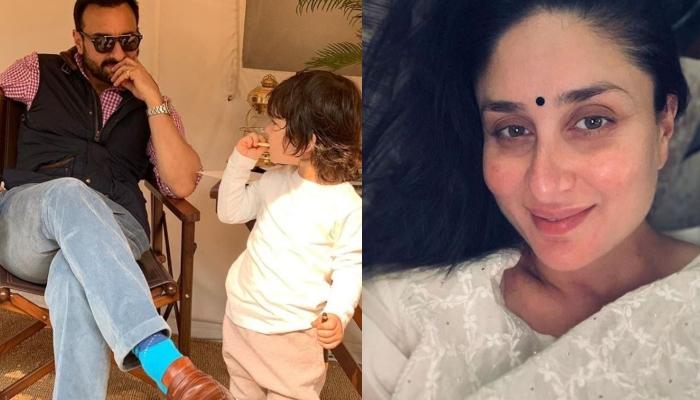 Gone are the days when we had to wait for Saif Ali Khan and Kareena Kapoor Khan’s little bundle of joy, Taimur Ali Khan to step out of the house for the paparazzi to capture him. Thanks to Kareena, who had joined the social media platform, Instagram early this year