Kareena Kapoor Khan posts a throwback childhood picture with her sister, Karisma Kapoor and calls it her happiest memory. Kareena and Karisma's love for food is evident in the picture. Do you travel miles and seek on an adventure only to relish a great dish? Are you that person in the group who is the first one willing to try out new dishes? Is 'I know this amazing new place to eat!' your common phrase? Is food your first love and are you always hungry? Then you are a complete foodie and you'll totally relate to the Kapoor sisters, Karisma Kapoor and Kareena Kapoor Khan in the picture shared by the latter of her childhood memories. (Also Read: Kareena Kapoor Khan Posts Unseen Maasi-Nephew Moments Of Karisma Kapoor With Taimur Ali Khan [VIDEO])

It wasn't a cakewalk and was a struggling journey for Kareena Kapoor Khan to make her own name in the industry, breaking free from the shadow of her Kapoor family lineage and superstar sister, Karisma Kapoor. But one thing apart from the acting talent that the Kapoor sisters inherited from their star Kapoor family is the love for food. Karisma and Kareena are big-time foodies and their pictures have been proof of it. Kareena and Karisma, in many interviews, have confessed being foodies, just like the Kapoor clan.

Sometime back, Karisma Kapoor had posted a childhood picture with her sister, Kareena Kapoor Khan as they both relished their favourite food at a party. Twinning in white and black outfits, Karisma had captioned her candid picture with Kareena as "Twinning since childhood #throwbackthursday #sisterlove #alwaysandforever #familygoals #fooodies #stylegoals.” A while back, Kareena posted the same picture on her IG handle and captioned it as "Some of my happiest memories are from my childhood, which shaped me into what I am today."

Did you know food is one of the things with which Karisma Kapoor bonded over her sister, Kareena Kapoor Khan? In a Sunday brunch with Curly Tales, Karisma had spoken on her equation with Kareena and was quoted as saying "We never fought actually. We have touchwood been very close. Well, apart from our sisterly bond, we have bonded over clothes, food, travel." Admitting being a foodie, Karisma had said, "Yes absolutely! I love my food, no compromise on food. I love Indian food, any kind of Indian food. I love my biriyani and I love Kali Dal, Palak Paneer, simple things too. And then I am also quite a non-veg eater.  We have grown up in a home where food has always been a big thing. Watching my Dadi, my Nani, so it has been a home where there has been a lot of Punjabi and Sindhi food." (Also Read: Arjun Kapoor's Sister, Anshula Wishes Him Birthday, Penning How He Held Her After Their Mom's Death) 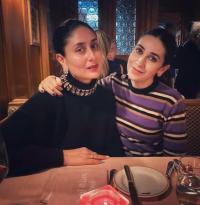 When Karisma Kapoor was asked about her favourite hangout points in Mumbai, she had retorted, "Firstly my favourite hangout point would be my sister’s home because she loves to eat home food. So we tend to eat alot whether its lunch or dinner at her home." The Kapoor family is famed for their love for good food and in an interview with the Hindustan Times, Randhir Kapoor had spoken about the entire family being a foodie. He had said, "The entire Kapoor family just loves food — you can tell from our sizes. It’s a family of foodies — from my great grandfather, to my grandfather to my dad, to my uncles, to my brothers, and it includes my children, Karisma and Kareena. Of course, Karisma and Kareena are fit because they exercise, while we don’t." 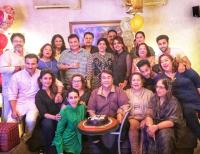 Speaking of the favourite dishes of his daughters, Karisma Kapoor and Kareena Kapoor Khan, Randhir Kapoor had continued, "My grandfather (Prithiviraj Kapoor) and father’s (Raj Kapoor) favourite dish was Yakhni Pulao. My daughter Karisma loves Fish Curry and rice while Kareena loves all kinds of cuisines, but has turned vegetarian for the last couple of years. She is very fond of Chinese food. In fact, all of us share a preference for Chinese food though Rishi Kapoor also likes Japanese." 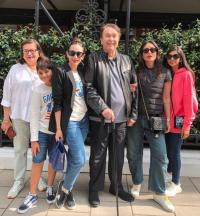 Revealing his favourite dishes that his mom, Krishna Raj Kapoor used to make, Randhir Kapoor had said, "If there is a party at RK (Studios), the food, mostly non-vegetarian, is always made at home. We are very fortunate to have good cooks. I guess we have an eye and taste for cuisine. I like the Meat Pulao my mother makes. I enjoy everything she cooks." In the same interview, Rishi Kapoor had also spoken about his love for food cooked by their mom and had said, "I love the Yakhni Pulao my mother prepares, Khatti Dal and Fish Fry. I love eating at mom’s house." Rajiv Kapoor had continued, "My mom has always been a wonderful host. At an RK party, she would go from person to person, to see whether everyone was eating well. The food at the party would comprise Payas, Meat Pulao, Chicken Curry, Mutton Curry, Fish Curry and Fried Fish. My cousins and friends would look forward to eating at our place. Before coming over, they would deliberately stay hungry so that they could enjoy the food made at our home." (Also Read: Taimur Ali Khan Is Back At Greeting Paparazzi As He Steps Out With Mom, Kareena And 'Abba', Saif) 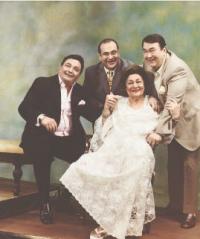 Are you also a foodie? What is the craziest thing you've done for food? Let us know!