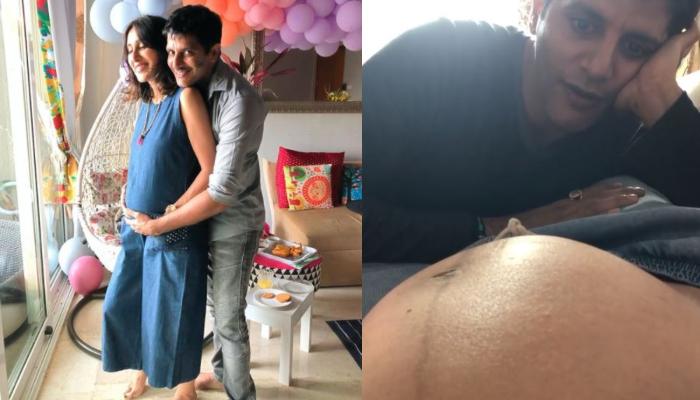 One of the hottest actors of the television industry, Karanvir Bohra is madly-in-love with his wifey, Teejay Sidhu and they're often regarded as the most inspiring, adorable, and powerful couple of the entertainment industry. The two had gotten married in 2006, in the presence of their family and loved ones. After ten years of marital bliss, Karanvir and Teejay had welcomed two little twins in their lives on October 19, 2016, whom they had lovingly named Bella and Vienna. (Recommended Read: Karan Mehra And Nisha Rawal Relish Their Sargi As They Fast Together For Karwa Chauth [Video Inside])

On August 28, 2020, Karanvir and his family had announced the wonderful news of Teejay's second pregnancy and had lightened the lives of their fans in the middle of gruesome COVID-19 pandemic. Since then, we have been receiving tons of gorgeous pictures of Teejay's baby bump and videos of the super-excited family.

On November 3, 2020, Karanvir Bohra took to his Instagram handle and shared a miraculous video featuring his pregnant wife, Teejay Sidhu. In the video, we can see Karanvir sitting in front of his wifey's baby bump and was left surprised and amazed when he saw their unborn baby's movement. He can be heard saying, "Oye! My goodness it's bouncing around". We can also spot their twin daughters, Bella and Vienna roaming here and there with happiness as they too witnessed the beautiful moment. Along with the video, Karanvir wrote, "This is a miracle... There is a life in there & it's moving... #omnamoshivaya the best gift for our anniversary #jaikaalbhairav" in the caption. Take a look: (Don't Miss: Atla Tadde 2020: Allu Arjun's Wife, Sneha Reddy Shares Their Adorable Photo On 'Telugu Karwa Chauth')

In an interview with Pinkvilla, Karanvir Bohra revealed that he and Teejay are planning to have a beach wedding next year on their 15th wedding anniversary in the presence of their families and loved ones. He said, "T and I were just talking a few days back before she left, that it’s been 14 years to our marriage. We have crossed two seven years which is great and it doesn’t feel like time has passed so fast. We had a baby after 10 years of marriage which just went by so fast. Now our children are 4 years old and we are having another one. What better gift to give on our anniversary? The little angel coming to our life, the 14 years gift will be this baby. I still remember the 10 years gift was these two angels. So we have had landmark anniversaries. Before the 10 years anniversary, we had Bella and Vienna and now we are excited for another one. Next year marks the 15th year of our marriage and we are going to make it special."

The adorable couple had celebrated their fourteenth anniversary on November 3, 2020, and had shared beautiful wishes for one another. Talking about the doting hubby, Karanvir Bohra's anniversary wish, then he had posted a selfie with his pregnant wife from their pool moments. Along with it, he had written a note that could be read as "That's you and me sweety.... #happyanniversary 14years. We have crossed 2 #sevenyearitch having you by my side is the best destiny that god has written for me. This year is really really special as we have an addition in our family, I can't wait to hold my new baby in my arms, we are going to be parents again... yaaaaaaay! #newlife #newadventures as lyricist #sameer sir wrote it beautifully, "Yuhi katjayega safar saath chalne se, ke manzil agayi nazar saath chalne se." @bombaysunshine #loveyoualwaysandforever."

On the other side, Teejay Sidhu had uploaded a romantic video with her hubby from the same pool outing and had captioned it with the sweetest note possible. It could be read as "Since the past fourteen years I've lost track of time.. seriously fourteen!? But in this whirlwind of love, life, kids, and work, there is one thing I know - I like me better when I'm with you... #happyanniversary my Manjo @karanvirbohra." Take a look: (Also Read: Bipasha Basu's 'Karwa Chauth' 2019 Video Of Breaking Fast With Hubby, Karan Singh On The Streets)

Did you like Karanvir's video of Teejay's baby bump? Let us know!