Karanvir Bohra Tries To Make His Newborn Daughter Smile While Feeding Her, Makes Faces Like Her

Karanvir Bohra Tries To Make His Newborn Daughter Smile While Feeding Her, Makes Faces Like Her

Karanvir Bohra has been blessing his fans with some adorable daddy-daughter moments. Now, Karanvir has once again shared another endearing moment and we totally loved it!

The joy a child brings into anyone’s life is unparalleled. One can never explain in words how great it feels to see your baby, to hold your baby or to talk with them. The Bohra-Sidhu family is facing this unparalleled feeling as Karanvir Bohra and Teejay Sidhu became parents for the second time. KV and Teejay had announced the news of expecting their third child in August 2020 and their twin daughters, Bella and Vienna had actively participated in the same. For the delivery, Teejay, along with her daughters, Bella and Vienna had jetted off to Canada to stay at her parents' place and later, Karanvir had joined them too. And on December 21, 2020, the doting parents had announced the happy news of welcoming their third girl. (Also Read: Gautam Gupta Shares A Glimpse Of His Daughter, Anayka's First Vacation To Dubai)

Like every parent, Karanvir was jumping with joy to hold his newborn daughter for the first time and it was quite evident in the video shared by him on his IG handle. On December 27, 2020, Karanvir had shared a video from the hospital room, post-Teejay’s delivery. The new mom could be seen lying on the bed and heard having a conversation with Karanvir, while the actor could be seen holding his little doll in his hands for the first time and expressing his feelings. He could be seen cradling the baby girl, kissing her and looking at her with utmost love. Sharing the video, Karanvir had written, “"Tum hi ho pehle,tum hi ho akhir".....That's How I'm going to be with all my daughter's and with the people who are my heart.... There is room for so much love, but this one is so so so special #myholytrinity is complete #laxmisaraswatiparvati.”

Karanvir has been blessing his fans with some adorable daddy-daughter moments. Continuing the same, he has shared another endearing video with his little baby girl on his IG handle. In the video, Karanvir can be seen holding his newborn girl in his arms, trying to feed her and make her smile. He can be heard saying, “Smile baby, baby smile” trying to talk with her in a childish tone to make her smile a little. In an attempt to make her smile, he even tried to copy the faces she made. At the end of the video, we can see him cuddling and kissing her. Sharing the video, KV wrote, “They eat, they poop, they sleep... And if they are crying, they need to do one of the three and is they are quiet and not sitting, eating or pooping you are lucky that's the time to smother then with kisses.... P.S. sanatise your hands and face before doing it.” Take a look:

Ever since the birth of the baby girl, Karanvir and his family have been sharing glimpses of their life with the newborn child. On December 22, 2020, Karanvir had shared a glimpse of his newborn, enjoying her sleep. Karanvir had taken to his IG handle and had shared an adorable picture with his baby girl, sleeping peacefully atop her daddy. The little wonder had looked cute in a pink and grey onesie and the doting daddy, Karanavir was seen taking a quick nap. Along with the picture, Karanvir had written, “She doesn't want to be in a cot or crib - she sleeps best like this! People will say I am spoiling her too much. But I can't help it - that's the kind of Dad I am. She brings out more love in me than I even knew I had. @bombaysunshine Sweety, thanks for this picture.” (Don't Miss: Rajesh Khanna Was Fond Of His Daughter, Twinkle Khanna's Husband And His 'Damaad', Akshay Kumar)

In an interview with SpotboyE, Karanvir and Teejay had talked about their feeling of embracing parenthood for the second time and welcoming a baby girl. Confirming the auspicious news of the arrival of a baby girl, Karanvir had said, "Yes, it's another girl in our family. We had already decided that either a girl or a boy would be equally welcome. If it was a boy it would, have been Laxmi, Saraswati and Ganesha in our family. Since it's another girl, it is Laxmi, Saraswati and Parvati. I consider myself most blessed. Om Namah Shivay." The elated father had further added, "I've become Charlie, now that I've got three angels. Charlie's Angels, Laxmi Saraswati and Parvati." (Recommended Read: Shaheer Sheikh Shares A Twinning Picture With His Wife, Ruchikaa From Their Mini-Honeymoon)

Isn’t the video of KV with his newborn daughter too beautiful? 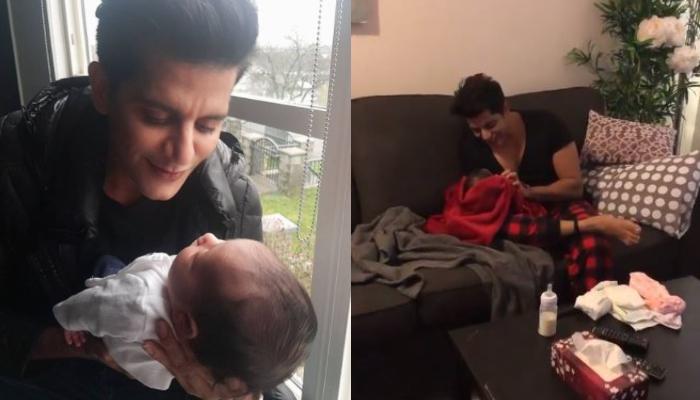 One of the hottest actors of the television industry, Karanvir Bohra is loved by millions for his acting and the kind of person he is in real life. The actor is madly-in-love with his wifey, Teejay Sidhu and often they're regarded as one of the most inspiring couples of the