Karanvir Bohra has shared an interesting video with his twin daughters, Bella and Vienna from the sets and it is fun to watch!

The fathers that we used to see in the cinema and TV soaps had blinded us so bad that we had started imagining a father in a strict demure only. However, in reality, a father too wishes to play with his kids, spend time with them and understand their needs. A father too wishes to manage his time for his kids and doesn’t mind being busy learning to do ponytails of his little girls. Karanvir Bohra is a prime example of how fathers too want to babysit their little ones. KV is on cloud nine these days as he has not just one, but three angels in his life and he is happily doing the ‘daddy duties’, glimpses of which we often witness. Now, KV has shared an interesting video with his twin daughters, Bella and Vienna and it is fun to watch. (Recommended Read: Yuzvendra Chahal's Wife, Dhanashree Verma Flaunts Her 'Chooda' With Printed Pants)

Karanvir Bohra and Teejay Sidhu had announced the news of expecting their third child in August 2020 along with their twin daughter, Bella and Vienna and since then, the lovely family had treated us with the pregnancy diaries of Teejay Sidhu. For the delivery, Teejay had jetted off to Canada to stay at her parents' place with her twin girls, Bella and Vienna and later, Karanvir too had joined Teejay and their girls in Canada. And on December 16, 2020, the doting parents had announced the happy news of welcoming their third girl. While the new baby girl has become everyone’s jaan, KV has ensured that his elder daughters too get all the attention needed. 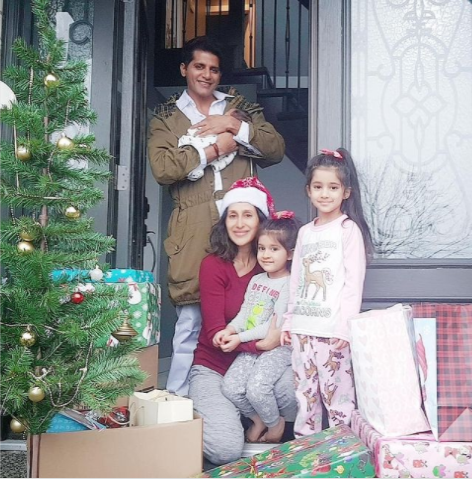 Karanvir Bohra is no doubt a great father and a doting husband. We have always seen him helping his wife, Teejay and having fun with his daughters, Bella and Vienna. And now, with Snowflake on board, we are sure, his happiness has only grown manifolds. KV took to his IG handle and shared a video, showcasing how Bella and Vienna hold equal importance in his life as he spends time with them in between the shoots. In the video, we can see KV sitting on a chair, with a makeup artist standing by his side as he was busy playing with Bella and Vienna. The daughters can be seen asking their father to choose between two hands to which, he started with ‘akkad bakkad bambe bo’. However, by the end of both the chances, his daughters made a fool out of him. Check out the fun video below:

Karanvir is happiest to be blessed with a third girl child as he feels his ‘Laxmi, Saraswati and Parvati’ trio has been completed. To announce the arrival of their baby girl and giving a glimpse of the super-excited big sisters, Bella and Vienna, Karanvir Bohra had posted a video holding his newborn in his arms as Teejay had captured the moment. Karanvir had captioned it as “I can't even imagine the bolt of happiness that is going thru my veins...I can't help but believe that I'm a father of 3 girls... yahooooo! Life can't get better than this, imagine ruling the world with these 3 Queens in my life... Thank you God for all these angels in my life. I'll take the best care of them, coz they are my #teendeviyaan My #laxmi #saraswati #parvati P.s. u can call me #charlie coz there's are my 3 angels My #alpha #chi & #omega.” (Must Read: Minissha Lamba Opens Up On Parting Ways With Husband, Ryan Tham)

Even the twin sisters too love their baby sister a lot, without a sense of jealousy. A few days back, on the IG handle of Bella and Vienna, we had seen a video of the twin girls loving their newborn sister. In the video, we could see the newborn baby sleeping in her daddy, Karanvir’s arms and the twin sisters sitting next to him. The girls had started hugging and kissing their little sister. While Vienna had caressed her little sister’s hair, Bella had tried to hold her newborn sister’s hand, in a response to which, the baby girl had held her elder sister, Bella’s hand. The caption along with the video could be read as “We have become big sisters now. And we take our job very seriously! (We know our #Dad needs our help, even though he says he doesn't!)” (Also Read: Nakuul Mehta's Wife, Jankee Parekh Opens Up On Her Experience Of Feeling The Baby Kicks)

We love how Karanvir spends his time with his three daughters, equally loving them! Television actor, Karanvir Bohra and his wife, Teejay Sidhu's love story is one of a kind and they are one of the cutest couples in the telly town. The actor, who was mostly popular for his negative roles, had swooned his ladylove's heart and they had decided to walk down