The hot and much-in-love couple, Karan Singh Grover and Bipasha Basu’s wedding was a much-hyped affair. Besides being a stunning visual affair of sorts, there was a lot of leg pulling.

Some trolled Karan on his decision to marry a third time and some, mocked Bipasha for agreeing to be his third wife. In between all of this, many wanted to know what Karan’s ex, Jennifer Winget had to say about Karan and Bipasha.

But before the Beyhadh actress could say anything, Karan did his part by speaking about his 2-year-old marriage with Jennifer and what actually went wrong between them.
According to a report on BollywoodLife, Karan went all out to say that his marriage to Jennifer was a mistake!

Not only that, he further went on to add that some people are better off as friends and should not take it to the next level. He also blamed himself saying he had a penchant to rush into things, but he won't repeat such mistakes in future.

According to another report in a leading daily, Jennifer Winget had asked for a huge alimony amount, which Karan refused to give. It was also reported that Karan said that Jennifer was being irrational in asking for the outrageous sum.

Must See: The Best Moments From Bipasha-Karan's 'Monkey Wedding' Reception

But, Jennifer took to her Instagram account and clarified that she has not asked for alimony, and all the reports were fake. She even wished Karan all the very best for his future endeavours. Here, have a look at what she posted: 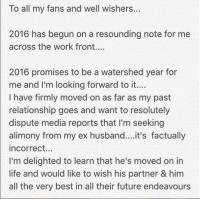 In a separate interview, Jennifer on her marriage with Karan, said:

"It was an experience, and an amazing roller-coaster ride. There were some happy and sad moments. But I know that I gave my 500% (to my marriage), and no one can point a finger at me. I don't regret a single day of my life. But, s**t happens. I don't feel bitter or hold any grudges. I am in a happy space. People might think otherwise, but that's not the case." 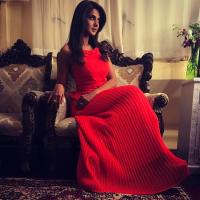 While talking to Hindustan Times about how she feels for Bipasha and Karan, she said:

"I wish them good luck, and a happy married life. I think they make an amazing couple. Marriage is a beautiful thing if two people work on it and want to be together. May God bless them. I feel love is an amazing thing, and if you can feel it for someone, it is great."

Jennifer and Karan met on the sets of their show, Dill Mill Gaye and tied the knot soon after. However, they decided to separate after only two years into their marriage. Bipasha and Karan, who starred together in the movie, Alone, tied the knot April 30, 2016, and the couple is still crazy in love. The couple recently celebrated their first anniversary and this is what they did (read here). 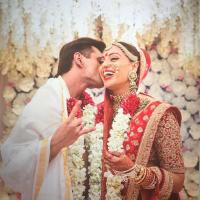 Here’s wishing lots of happiness to Jennifer and the ‘monkey couple’ Karan and Bipasha in their respective lives. Stay tuned with us at BollywoodShaadis to get the latest news about your favourite celebs.