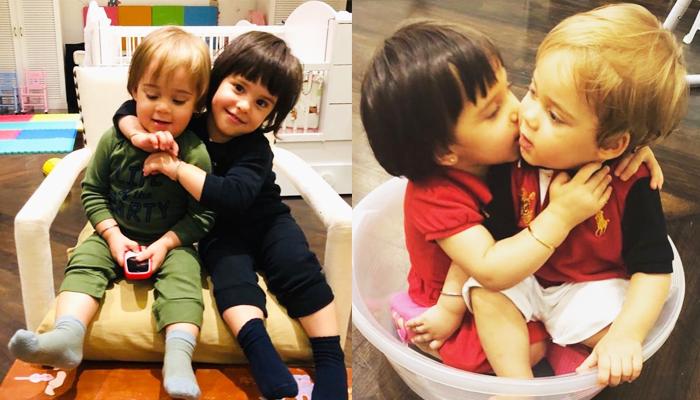 Celeb babies are ruling the internet and tinsel town like how! And the one baby-duo who is topping the charts is Karan Johar's twin babies- Yash and Roohi Johar. Yash and Roohi will turn 2 tomorrow on February 07, 2019. They were born through surrogacy on February 07, 2017, and their cuteness level is unmatched. (Suggested Read: Neha Dhupia's Birthday Wish For Husband Angad Bedi Is Sweet, But His Reply Is Even Sweeter)

Well, get geared up for tomorrow as we are surely going to witness a rocking and cuteness-overloaded birthday bash. Last year, on February 07, 2018, when Yash and Roohi had turned one, KJo had wished his two babies on social media by writing, "I can’t thank the universe enough for giving my mother and me the most beautiful gift ever. Happy Birthday Roohi and Yash....you are a blessing to us."

Karan Johar had told a media portal before Yash and Roohi's first birthday, “It's a small birthday party at home, with just kids their age. I want to keep it simple and intimate this year.” Also, according to a statement in DNA, a source was quoted as saying, “Karan has already spoken to his friends and invited them and their tiny tots to the party at his home. So, there will be Taimur Ali Khan, Adira Chopra, Misha Kapoor, Laksshya Kapoor and some other B-Town kids."

Talking about fatherhood, Karan had once shared in an interview, “Fatherhood is proving to be a breathtaking roller coaster ride. When they were conceived, I was ecstatic, but I told myself I would be a responsible father and not a paranoid mother. Then came the complexities of premature birth. And the heartache of seeing them in the incubator. But I felt a strong sense of ownership. They were my lifelines. A lifelong dream come true. And I couldn’t wait to take them in my arms. When I did that for the first time, it was incredible.” (You May Like: Abhishek Bachchan Goes Out On A Family Dinner On Birthday With Aishwarya, Aaradhya, Amitabh, Shweta)

He had further added, "I knew this was the beginning of a different kind of love story. The start of the best phase of my life. Mothers go through these emotions. Fathers come in later. But I was there right from the start, with the other mothers in the ICU whose babies were also born weighing less than 1.5 kilos, their vital body parts, their tiny lungs and heart underdeveloped. And each time a baby crossed 2 kilos and the nurses put up a smiley sunshine face announcing this, I would celebrate with their mothers because I fully empathised with them.”

After Yash and Roohi were born, Karan had written an open letter to them. Writing in the most heartfelt manner, Karan had penned down, "You've changed my life completely, and I'm not complaining. I worry a lot more than I ever did — I have these strange thoughts about my insurance premium, my will, even the division of my assets. I stay awake some nights wondering who I can appoint your guardian if something happened to me."

He had further written that he had already started imagining Yash and Roohi's first day at school, "I’ve already started imagining things like your first day at school, your first words and even your first acknowledgement of me. To tell you the truth, every single day I whisper ‘papa, papa, papa’ into your ears because I'm petrified that your first words will be in Malayalam (all our four nurses are from Kerala)!" (Don't Miss: Arjun Kapoor Joins Malaika Arora On Dinner With 'Girl Gang' Gauri Khan, Amrita Arora, Karisma Kapoor)

Well, are you all set for Yash and Roohi's second birthday bash, and ready to witness the cutest Bollywood celeb kids under one roof?