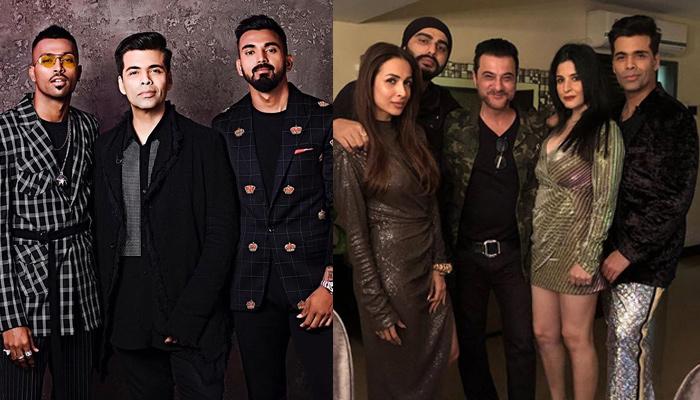 A lot has been happening over ‘crushes’ these days! With Alia Bhatt having got her ‘crush’ as her boyfriend and Sara Ali Khan signing a movie with her ‘crush’, situations like these only add more hopes in the heart of all ‘crushers’! Well, maybe not for all as the ‘crush’ thingy didn’t materialise for one of the ace cricketers of Indian cricket and we sort of missed out on yet another possible amalgamation of the cricket and Bolly world. Excited to know what we are talking about? Thou shalt get all the details in the later paragraphs! (Do Read: Deepika Padukone-Ranveer Singh Return From Their Sri Lanka Honeymoon Post Celebrating Her Birthday)

Malaika Arora (not Khan anymore!) and Arjun Kapoor’s dating spree is not unknown to the masses and why wouldn’t you? The couple is finally coming out in the open together, posing pictures with the man’s family, going on dinner dates and being together in other celebratory events. Only recently, did Arjun Kapoor’s uncle, Sanjay Kapoor posted a ‘Family picture’ wherein we could all see Karan Johar, Sanjay Kapoor and his wife, Maheep Kapoor and lovebirds, Arjun and Malaika together in one frame. While all’s brewing steadily between Arjun and Malaika, reportedly, ace cricketer, KL Rahul had a major ‘crush-break’ due to Malaika having found love again in her life!

Yesterday’s episode of Koffee With Karan Season 6 saw some budding ‘bromance’ between cricketers and guests of Karan Johar’s show, KL Rahul and Hardik Pandya. When Karan started discussing celebrity crushes with them, in a rather interesting revelation, Rahul shared that he ‘had’ a thing for our Chaiyya Chaiyya girl, but the feeling has faded away. When the Dharma producer further asked him a reason behind Rahul’s faded crush, Karan also added a possible reason that the same might have happened as Malaika is now dating Arjun, to which Rahul agreed! And thus, Karan Johar finally spilled the beans on the same!

At yet another episode at Koffee with Karan season 6, the Kuch Kuch Hota Hai director didn’t budge from pulling Malaika’s leg. The episode which had Aamir Khan as a guest, also saw Malaika in a guest appearance to host the rapid fire round. Engaged in a casual conversation with Karan and Aamir, Bollywood’s Munni said that she feels that the two stars will rock the stage with her. To which, Karan replied, “We are walking down the aisle, that will also happen in your life soon enough”. A blushing Malaika had retorted, “Stop it now.. stop now”. (Must Read: Mohsin Khan's Sister, Zeba Gets Married, Girlfriend Shivangi Joshi Twins With Him In Black And Gold)

Also, as per a latest report, Arjun Kapoor and Malaika Arora are all set to tie the knot in April 2019. A source close to the couple informed Deccan Chronicle, “Malaika and Arjun are extremely fond of each other. They have never really spoken about each other but they are extremely happy in their own personal space. In a steady relationship now, Malaika and Arjun plan to take their relationship to next level and tie the knot next year.”

Another report claimed, “Malaika is no longer keen to hide her proximity to Arjun. When she was with Arbaaz, the Khan family, especially Salman, made their disapproval very clear. But now that she has broken away from Arbaaz, she sees no reason to be coy about her closeness to Arjun. Besides, Arbaaz is also seeing someone else now.”

Grapevine is also abuzz that Malaika and Arjun together have purchased a flat in a plush society in Mumbai. A source was quoted as sharing with BollywoodLife, “Arjun and Malaika have together purchased a flat in a plush society near Lokhandwala Complex. It is their joint investment together. Whether they plan to live in or no is entirely up to them. But they are surely getting a space for themselves. Currently, the interiors of the house are being done and both Malaika and Arjun are looking into the details.”

Last year (2018), Malaika opened up about her relationship status with Hindustan Times. Therein, she was quoted as saying, “I never answer personal questions. Not that I shy away from answering or whatever. I just don’t feel comfortable talking about my personal life. And whatever my life has been, everyone is aware of it. I don’t need to be talking about it. I am just enjoying my life - it’s beautiful and precious.” (Also Read: Farhan Akhtar Turns Photographer For Girlfriend Shibani Dandekar, Shares A Gorgeous Picture Of Her)

On account of Arjun’s 33rd birthday this year (June 26, 2018), the Ishaqzaade star spoke about his marriage plans. He stated, “Abhi chhokra jawaan hua hai (laughs). Right now, I am not in the frame of mind to even consider marriage. I am very happy seeing my near-and-dear ones after marriage. I think it will still take me two-three years [to think of marriage]. You need to be in the right frame of mind. Just because others are doing it, you can’t do the same. Both my cousins were clear that they wanted to settle down. They worked on their relationships long enough to feel that. So, it made complete sense to them [to get hitched]."

Karan, thanks for finally revealing it all! All we wait for now, is to see Arjun and Malaika making it official soon!