Yash and Roohi Johar are back with another episode of roasting their father, Karan Johar and you wouldn't want to miss this one out. Check the video inside! We have made a new quarantine song! Would you like to hear? Of course, you do. Here it goes: 'Roses are Red, Violets are blue, who's getting bored in this quarantine? It's no one but you!' Okay okay, calm down, take a deep breath, don't throw away your phone (you've got only one and repair shops are closed, c'mon)! Let's try again, trust me this one's an absolute gem. It's something like this: 'Roses are red, we miss the morning traffic rush, Karan Johar is trolled by who? None other than Roohi and Yash!' Okay, seems our content team's wits have gone for a toss, we apologise. Quarantine and writers are a terrible mix! (Recommended Read: Kareena Kapoor Khan And Son, Taimur Ali Khan's Unseen Picture With Cows Is Getting Viral On Internet)

It's been a long time since the lockdown has been imposed. It would not be totally wrong to say that some of us have kind of developed a habit of this quarantine. Some of us have settled into our routine of taking classes online from the comfort of our bed, some of us are habituated of crying everyday while working from home (pass the tissues you'all!) and some of us have resorted to our favourite timepass. Which is, replacing the maid and the cook with other members (we live in their homes). Anyway, cry later because the new episode of Karan Johar getting roasted by his kids, Yash and Roohi is out and this one's particularly hilarious. 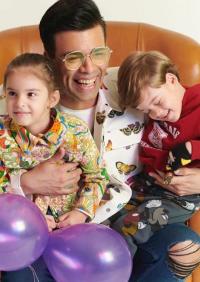 After questioning Karan's sartorial choices, mocking him for having an oversized tummy, calling his collection of shades stupid and making fun of his singing, Yash and Roohi are back with a bang and this time it's Karan's dancing that has received severe backlashing! In the new video uploaded by Karan, he can be seen (attempting to) dancing with his kids, when suddenly Roohi pointed towards him and said, "You're not dancing, you're very kharab dancing." To which, a baffled Karan asked, " I am very Kharab in dancing? Yash I am Kharab in dancing?" While Yash ignored Karan as if he wasn't even there. Karan then said, "You know I am really fed up I am Kharab in dancing I am very Kharab in singing, what am I ggod for Roohi?" To which, Roohi pointed her finger at Yash and Karan said, "I am good for Yash? I produced Yash that's my strength?" Karan then goes on to ask Yash what is his strength and urges him to speak nice things about his dadda, but the smug Yash remained oblivious to his presence! Karan uploaded the video with the caption, "Ok I have had enough!!!!!!!! I want to weep into my blanket! I am the Talentless MR JOHAR according to my children! #lockdownwiththejohars." Have a look at the video here: (Also Read: Sunny Leone Reveals The First Thing She Will Do When Lockdown Ends And Every Mother Can Relate To It)

In yet another video posted by Karan, he could be seen on the dinner table, asking his kids, "Who's making noise?" To which, they had pointed their fingers at him. He had then gone on to explain that he wasn't making noise, he was singing. He had then pleaded them to let him sing one more song, and they had downright refused by a stern 'no'. Despite their repeated refusal, Karan had started singing 'Channa Mereya', to which, Yash and Roohi could be seen constantly saying 'no'! Lastly, Karan's mother, Hiroo had remarked, "Even your father wasn't good at singing but you're at least better than him." Have a look at the hilarious video here: (You May Also Like: Anissa Malhotra Gives A Glimpse Of Armaan Jain's Joota Chupai Ritual And Tags It The Funniest Moment)