Kanchi Kaul and Shabbir Ahluwalia are two of the hottest personalities on television. They both are a part of the small screen and have worked in the movies also. Just like this couple, their love story is beautiful as well. Read with us how Kanchi and Shabbir met, fell in love, and now, make a perfect couple.

Shabir and Kanchi broke many hearts when they announced their engagement. Since these two are really private people, they did not let anyone steal a glimpse of their love story. But anyone can say that they love each other infinitely. They apparently met through their common friend, Ekta Kapoor, and started dating then.

They both have a shared love for adventure sports. They made up with their fans for not telling them about their courtship by giving the media enough excess to their wedding and their life afterwards.

You May Also Like: Love Story Of Television’s Favourites Karan Mehra And Nisha Rawal

The wedding celebrations began with the couple hosting sangeet on November 23, 2011 and wedding took place on November 27. Kanchi wore an Anamika Khanna ensemble while Shabir wore black sherwani for the event. It was attended by a long list of celebrities including, Ekta Kapoor, Hiten and Gauri Tejwani, Ashish Chaudhary, Ritesh Deshmukh and Dino Morea.

On this occasion, their friend Varun Badola said:

"Shabbir and Kanchi are my sweethearts. Shabbir and I play for the same cricket team Boxy Boys. I met Kanchi via him. They look great together and as far as the sangeet is concerned it was superbly organized."

The couple was initially planning to have an intimate wedding, but the number of close people changed their mind. Kanchi, who wore a Tarun Tahiliani lehenga for the wedding, stated:

Their wedding reception was held in November 2011 and it was nothing less than a gala, which was RSVPed by many famous names from the telly world as well as the tinsel town.

Kanchi and Shabir have been married for more than six years now and their love story has been growing strong ever since. According to Kanchi, nothing has changed in her life after marriage as she has married her best friend. When you asked her if she feels that her life is any different post-marriage, she said:

"Not at all – it has just become better. It’s like marrying your best friend!"

On July 23, 2014, this couple welcomed their first baby, Azai. Their excitement on the arrival of their first child could not be expressed in words. On his first birthday, Kanchi shared:

"My days now are filled with your infectious laughter and your cooing cuddles - nothing is more amazing to me than for you to crawl over, gently lean in to bump heads and cuddle, making your happy coo sounds. I love you every minute of every day. You have brought our family together in ways you'll never fully realize. You made us Mommy and Daddy, and brought together a wide family of support. You are loved beyond measure."

The couple welcomed their second child, Ivarr Ahluwalia on February 18, 2016. As a happy mother, Kanchi exclaimed:

"We had planned our babies at a short interval so that I can get back to work. We are really elated, excited and ready to enjoy the drill all over again. We are hoping it's a girl this time so that the family gets completed."

Kanchi and Shabir together with Azai and Ivarr make a very adorable family. We wish them a lot of happiness and good health. And, all our readers can stay tuned with us right here to know a lot more about this lovely family. 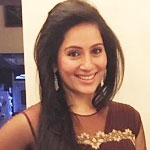