Anurag Kashyap's ex-wife, Kalki Koechlin reacted on Payal Ghosh's tweet, in which she had accused the director of sexual misconduct, and hailed her ex-husband for defending the dignity of women.

Two words, five letters - #MeToo have turned into a movement and it holds zillions of sexual harassment and abuse stories of men and women. In October 2017, when women in Hollywood came together for the #MeToo movement and shared their sexual harassment stories, it left us wondering if Bollywood will ever have its #MeToo movement. Some unwavering voices did come in front from B-town in 2018 and since then, there has been no stop in this movement which aims to make a society where no soul has to say, #MeToo! (Also Read: Anurag Kashyap Shuts Down Troll Who Mocked His Unsuccessful Marriages With Aarti And Kalki Koechlin)

Known for keeping his audience on the edge of their seats, taking the viewers to understand the true roots and questioning certain aspects of the society, Anurag Kashyap has given some realistic pieces of cinema in his more than two-decade long career. On September 19, 2020, Payal Ghosh, who had made her Bollywood debut in 2017 with Patel Ki Punjabi Shaadi, had accused Anurag of forcing himself on her and in her appeal to Prime Minister Narendra Modi, had tweeted, “@anuragkashyap72 has forced himself on me and extremely badly. @PMOIndia @narendramodi ji, kindly take action and let the country see the demon behind this creative guy. I am aware that it can harm me and my security is at risk. Pls help!” Anurag Kashyap’s ex-wife, Kalki Koechlin reacted on Payal Ghosh’s tweet, in which she had accused the director of sexual misconduct, and hailed her ex-husband for defending dignity of women, both on the screen and in real life. Kalki wrote a powerful long note on her IG handle, which can be read as “Dear Anurag, don’t let this social media circus get to you, you have fought for the freedom of women in your scripts, you’ve defended their integrity in your professional space as well as in your personal life. I have been witness to it, in the personal and professional space you have always seen me as your equal, you have stood up for my integrity even after our divorce, and you have supported me when I felt unsafe in a work environment even before we got together.” Encouraging Anurag Kashyap to stay strong during the tough phase and asking him to 'hang on to that dignity' and not let the 'social media circus' get to him, Kalki Koechlin concluded, “This strange time where everyone gets to abuse one another and make false claims without any repercussions is a dangerous and repulsive one. It is destroying families, friends and countries. But there is a place of dignity that exists beyond this virtual blood bath, a place of paying attention to the needs of those around you, a place of being kind even when no one is looking, and I know you are very familiar with that place. Hang on to that dignity, stay strong, and keep doing the work you do. Love from an ex wife.” Anurag reposted Kalki's post on his IG story and captioned it with a heart emoji. (Also Read: Twice Married, Thrice In Love: Anurag Kashyap Says, Even At 90, I'll Be In Love) Anurag Kashyap too, had reacted to Payal Ghosh’s claims and with a series of tweets and a statement from his lawyer, Priyanka Khimani, he stated that the allegations levied against him are completely false. The statement reads, “My client, Anurag Kashyap, has been deeply pained by the false allegations of sexual misconduct that have recently surfaced against him. These allegations are completely false, malicious and dishonest. It is sad that a social movement as important as the #metoo movement has been co-opted by vested interests and reduced to a mere tool for character assassination. Fictitious allegations of this nature seriously undermine the movement and seek to unconscionably trade upon the pain and trauma of actual victims of sexual harassment and abuse. My client has been advised about his rights and remedies in law and intends to pursue them to the fullest extent - Priyanka Khimani.” Here are the screenshots of the statement and the tweets by Anurag: 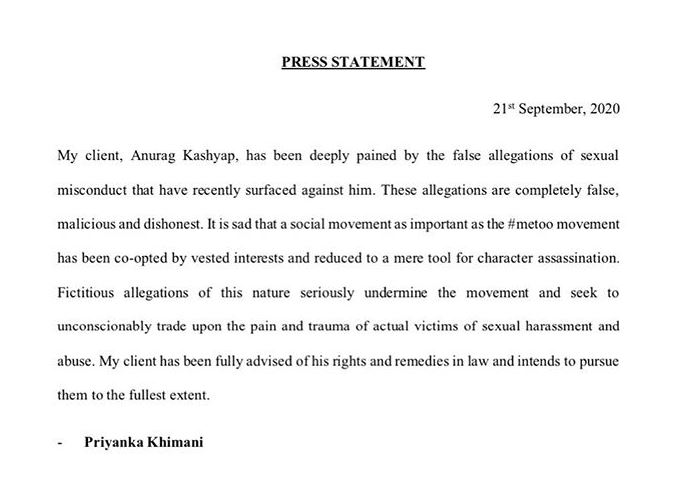 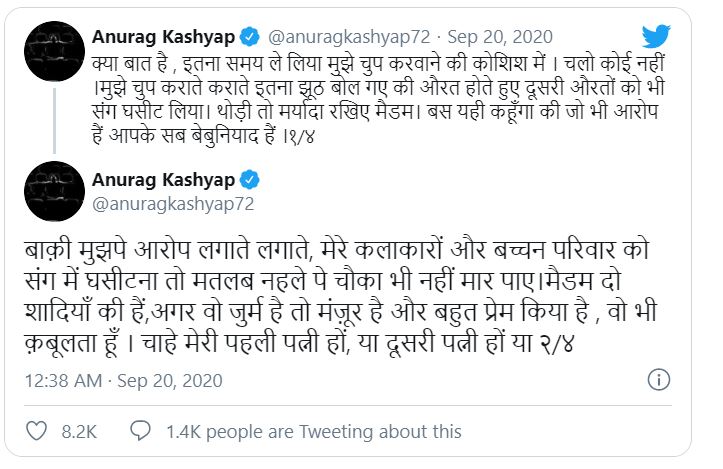 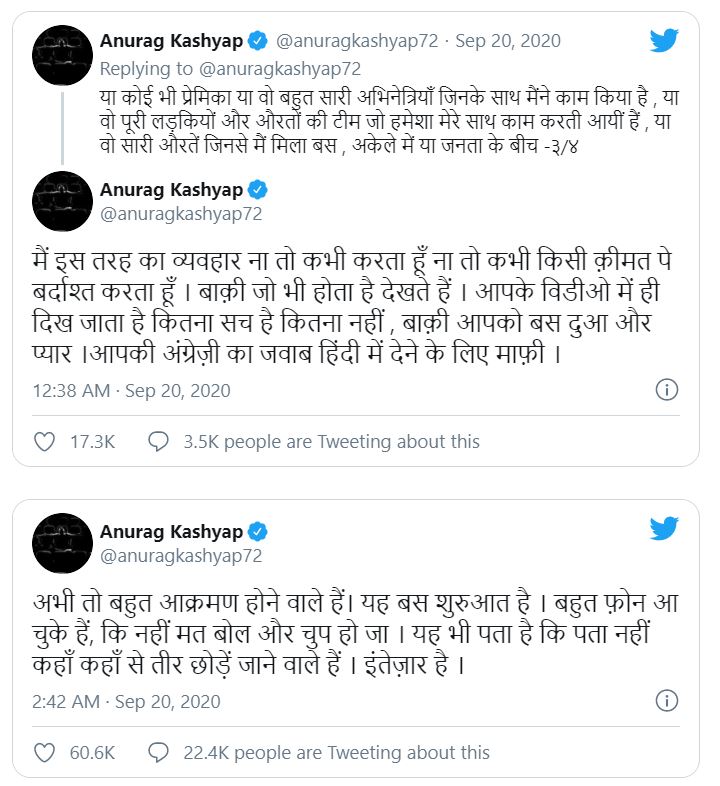 Speaking about her #MeToo experience in an interview with ETimes, Payal Ghosh had revealed how she had managed to overcome that horrifying situation. Recalling the incident, Payal had said, “During my earlier days as an actress, I met a director in his house at ERD road in Mumbai. During the initial few days, he was very nice and pampered me a lot. A couple of days after, when I went to meet him, there is this smell of drugs and alcohol which made me felt like puking. He took me to a separate room which was filled with cassettes, DVDs and books. He suddenly started to show me an adult film and when I felt uncomfortable and decided to walk out, he said that this is very normal in the industry and so many girls would come upon his invitation and spend good time with him. Somehow, I managed to come back from his house and though he introduced many new talents to the silver screen, I never got in touch with him after that. It took a month for me to come out from that experience.” (Also Read: Anurag Kashyap's Daughter Aaliyah Kashyap Wishes Him On His Birthday With Adorable Childhood Picture) What do you think of the #MeToo claim of Payal Ghosh against Anurag Kashyap? Let us know!