Kajal Aggarwal and Gautam Kitchlu are honeymooning in Maldives. On November 8, 2020, she shared dreamy pictures from the same and we couldn’t stop drooling over them. 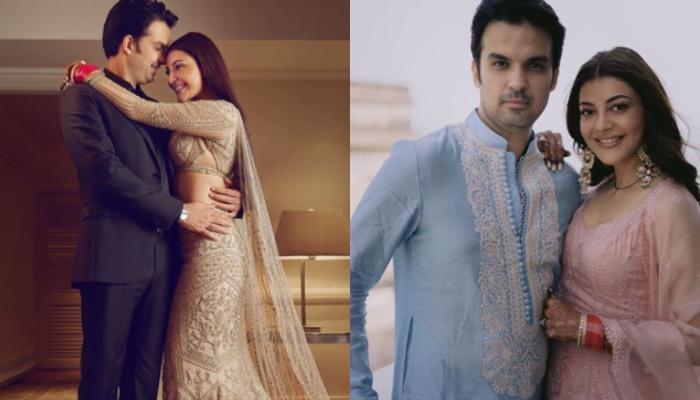 Ever since Kajal Aggarwal had tied the knot with her ‘Mr Perfect’, Gautam Kitchlu, we can’t stop scrolling through her IG handle, which is filled with breathtaking pictures. It was on October 30, 2020, when South Indian sensation, Kajal had begun her happily ever after with her interior designer beau, Gautam according to Punjabi and Kashmiri rituals. For the wedding, Kajal had donned a red Anamika Khanna lehenga with golden embroidery and had paired it with an onion-pink organza dupatta with the cut-work border, over her head. The handsome groom, Gautam had looked dapper in a white bandhgala sherwani by Anita Dongre with an onion-pink doshala. (Also Read: Niti Taylor's Hubby, Parikshit Bawa Surprises Her With A Cute 'Birthday Kisses' Video And A Gift)

After all the post-wedding rituals, Kajal and Gautam had jetted off to the Maldives for their honeymoon. Kajal had taken to her IG stories and had shared two pictures, one was of their customised travel pouches and the other was of their passport covers. On both, the pouch and covers the couple’s name was mentioned and they had taken twinning to another level.

On November 8, 2020, Kajal Aggarwal took to her IG handle and shared mesmerising pictures with Gautam Kitchlu from their honeymoon. Posing against the bright blue ocean, Kajal looked stunning in a red dress with a hat, while Gautam kept it casual in a white T-shirt and brown shorts. Kajal also shared a picture of her bag and slippers and captioned them as “My beach essentials.”

In a conversation with the Vogue India, Kajal Aggarwal had opened up about her love story with hubby, Gautam Kitchlu. Sharing how they got to know each other through mutual friends, she had said, “Gautam and I dated for about three years, and then we were friends for seven. We have progressed in every stage of being friends and been very important in each other’s lives.” Sharing how lockdown had made them realise that the two want to live together forever, Kajal had added, “We were used to meeting all the time. Whether it was a social party or an important professional endeavour, the other one would always show up. So, amidst the lockdown, when we didn’t see each other for a few weeks—at best, we would catch a glimpse behind a mask at a grocery store—we realised that we wanted to be together.” (Also Read: Divyanka Tripathi Dahiya Shares Glimpses Of Her Hubby, Vivek Dahiya's Birthday Celebrations Dinner)

She then shared how Gautam confessed his feeling for her and spoke about their heartfelt, emotional conversation about getting married. She had said, “Gautam is understated when it comes to romance. He’s not the filmy sort, and I am grateful for it because I have enough of that in my films. So, it wasn’t a proposal with all of the jazz, but it was an extremely heartfelt, emotional conversation between us. He was so authentic about his feelings and the way he expressed how he wanted to have a future with me; I couldn’t be more sure about spending my life with him!”

On November 2, 2020, Kajal had taken to her IG handle and had shared some pictures with Gautam from their lockdown engagement ceremony. In the pictures, Kajal had looked gorgeous in a yellow saree by designer, Manish Malhotra and on the other hand, Gautam had looked handsome in a cream-coloured bandhgala. The couple had complemented their look by opting for matching masks. Along with the pictures, Kajal had thanked Manish for creating the stunning saree in the middle of the lockdown. Her note could be read as “My dearest @manishmalhotra05 thank you for getting your team to create this beautiful saree for me, all the way back in June, bang in the middle of the thick of the lockdown- when nothing was even possible. I truly appreciate all your effort, hard work and the warmth with which you were a part of my engagement. Lots of love.” (Also Read: Neha Kakkar And Rohanpreet Reveal Their 'Jab We Met' Story, Share Details Of Their First Meeting) 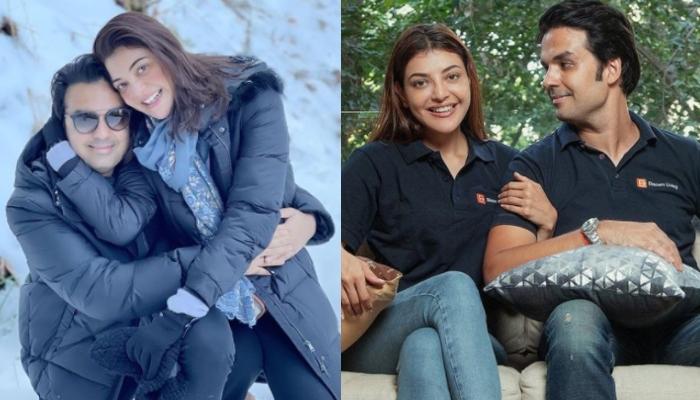 If there is love, then nothing else matters – this is the perfect mantra for a happy relationship. From being with each other through thick and thin to indulging in respecting each other’s decision, marriage is a balancing act. And in this digital world, old school love is something which we