She is one of the famous faces from the small screen. She first surprised one and all by announcing being a nun and then she double surprised when she tied the knot. This once the “self-proclaimed” nun has been in the news for quite some time now. And yet again, she is there with some other secret to tell. We are talking about none other than, former Bigg Boss contestant, Sofia Hayat.

Sameera Reddy Becomes Mother For The Second Time, Shares A Lovely Glimpse Of The Little One The pretty actress walked down the aisle with her Romanian boyfriend, Vlad Stanescu on April 24, 2017, in North Kensington, UK. Vlad happens to be an interior designer from Romania. The two of them had a lavish style kind of wedding ceremony in the UK and they looked super-cute together. We, in fact, shared the entire details with you then. In case you missed them or would like to peep into their wedding album, click here! And now, just after almost four months of their wedding, there is something which was never revealed earlier. Well, Vlad was earlier married to a girl named, Sarah and has a son from her. He is a cute little baby, who is probably 4 or 5 years old, and his name is Arthur. So, recently, Sofia and Arthur went to Sibiu, Romania and this was the first time when the actress met her stepson. Together they had a gala time and enjoyed exploring the destination. We could see Sophia bonding well with her stepson, Arthur through her Instagram posts. Not just this, as per a report, she also gifted him some clothes and a painting kit. You May Also Like: After KJo And Tusshar, Salman Is Planning To Become A Single Father

In an interview with TellyChakkar, Sophia was quoted as saying:

“My husband has a son from his first marriage when he was just 21. I met my step son for the first time earlier this weekend. I have enjoyed a lot with him. Even he liked and loved me. He is very cute. We all slept together like a family. He was cuddling me at night. Vlad is an incredible father. It was lovely seeing him like this. He is really attentive. He makes sure to get him bathed and then dress him up. I gifted my son a few clothes and a painting kit. We enjoyed painting rainbows and butterflies. As a mother, I want to encourage his creativity and want him not to spend too much time on his phone playing games.”

Here are a few videos and other pictures that the actress shared with Arthur and Vlad. Take a look: 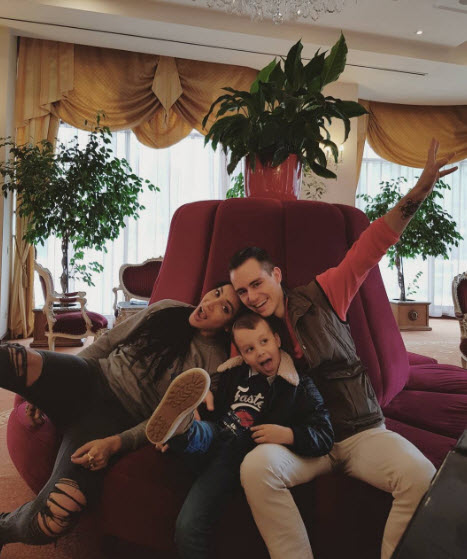 Recommended Read: This Superstar Actress Is Going To Wear Her Fiance's Grandmother's Saree On Her Wedding

Aww…it is really heart-warming to see Sophia and Arthur gelling so well with each other. Team BollywoodShaadis would like to wish you three all the happiness in this world. And all you guys, stay tuned for more latest news!

Sameera Reddy Becomes Mother For The Second Time, Shares A Lovely Glimpse Of The Little One