Janhvi Kapoor took to her Instagram handle to share a new video in which she is seen dancing with her 'Aksa gang'. Her brother, Arjun Kapoor's reaction is hilarious. Check details!

Nudging, pulling each other's leg and pissing the hell out of each other, yet protecting each other like no one is the very foundation of a relationship between a brother and a sister. Arjun Kapoor, Anshula Kapoor, Janhvi Kapoor and Khushi Kapoor prove it to be true all the time. Whether it was Anshula and Arjun extending support when Janhvi and Khushi had lost their mother, Sridevi or Arjun getting inked and dedicating his tattoo to sister, Anshula Kapoor, these Kapoor siblings give us some major sibling goals.

Recommended Read: Arjun Kapoor Dedicates A Tattoo To Sister Anshula Kapoor As They Are Intertwined For Forever In Life

Janhvi Kapoor is quite active on Instagram and has 11.6 million followers. A few months back, the Dhadak actress had posted a video in which she was seen grooving to the beats of Cardi B's Up. She was seen performing with her trainer, Namrata Purohit in the short clip. The video was in memory of the Filmfare stage and the actress had captioned it, "Missing the Filmfare stage so the poolside will have to do for now." In no time, the video had gone viral and fans had lauded her for her killer moves.

Janhvi Kapoor, who has mesmerised the audiences with her on-screen performances, took to her IG handle to share a video in which she was seen twerking to the beats of Sean Paul's Temperature with her gang, whom she prefers to call her 'Aksa gang'. In the video, Janhvi flaunted a beautiful black dress. When it comes to her moves, Janhvi was unbeatable. She captioned the video as "Aksa gang is back miss you @mahnaz_kotwal"

As soon as the video was posted, Janhvi garnered a lot of love from her close ones and fans. But it was her brother, Arjun Kapoor's hilarious reaction that had caught our attention. The Ishaqzaade actor took to the comments section and wrote, "Umm this needs a separate whole dinner to discuss." No wonder, Arjun Kapoor's jibe on Janhvi's video is just like any other brother, who pulls his sister's leg in front of all her friends on social media.

On June 20, 2021, as the world was celebrating Father's Day, Arjun Kapoor, Anshula Kapoor, Janhvi Kapoor and Khushi Kapoor had spent the day with their father, Boney Kapoor, followed by a gala family dinner. Arjun Kapoor took to his social media handle to share a happy moment from the evening and had written, "The father, the daughters & the son. Our Father’s Day dinner... Smiles are appreciated any day of the week but today just felt even more sweeter..." 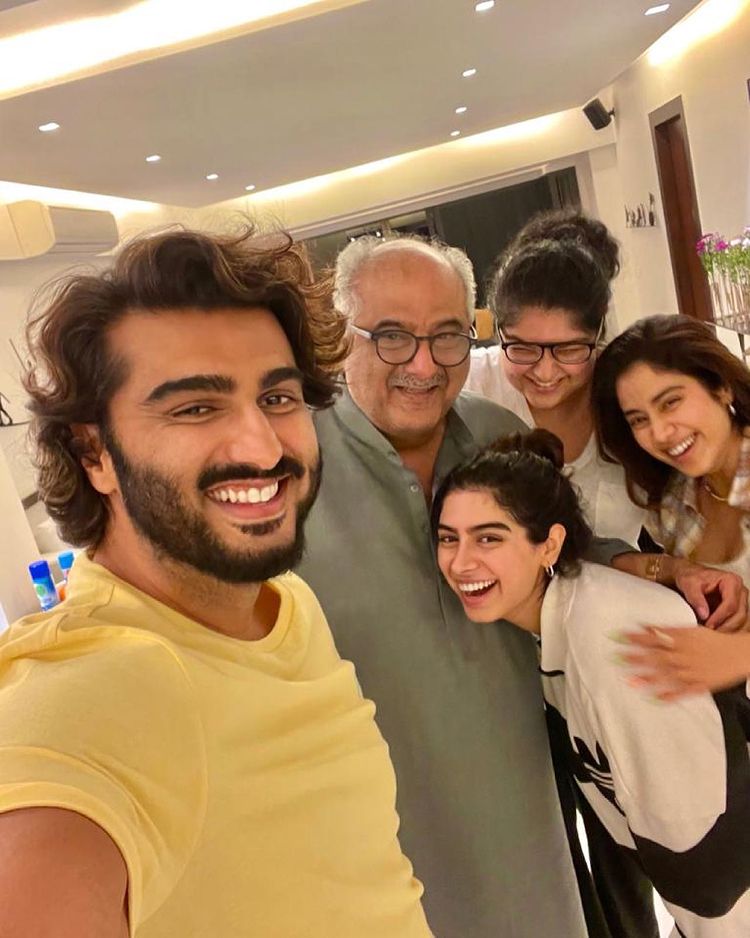 In an interview with Pinkvilla, Arjun Kapoor had shared what he has learned from his sister, Janhvi Kapoor.  He also had called her curious and had spoken about her zest to learn and level up. He had said, "Janhvi is very curious and unlike what I had expected her to be because she comes from a lineage of being told that she is going to be the next big thing in the world. She wants to learn, she wants to level up, she wants to get better." On the professional front, Janhvi was last seen in the movie, Roohi, along with Varun Sharma and RajKummar Rao. She has Good Luck Jerry in her pipeline.