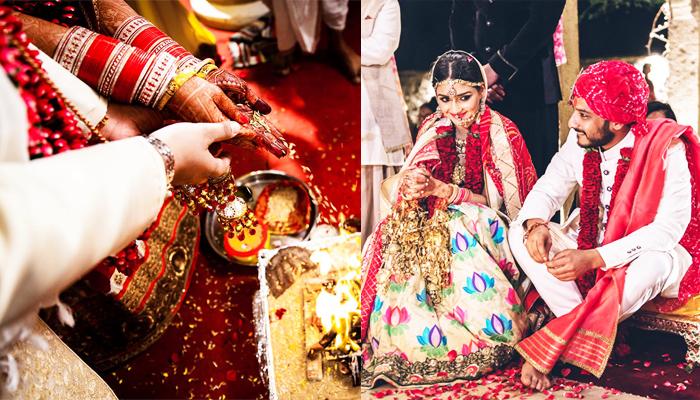 India is a home to many religions. Naturally, the diversity in wedding rituals varies from place to place. One religion which boasts of simplicity is Jainism. Jain wedding traditions and rituals are many in number, yet they all are characterised by their simplicity and purity. The union of a man and a woman into the sacred realm of marriage takes place with a lot of zeal and enthusiasm in this culture.

When Jainism as a religion originated, it attracted many followers due to its simplicity and so, there are many ancient and sacred traditions that go behind conducting a Jain wedding. Read on to find out all the different rituals of a traditional Jain wedding.

This is the first pre-wedding ritual in Jain tradition. Lagana lekhan literally translates to 'writing of an auspicious date'. This ritual is basically a small puja which takes place at the bride’s residence. Here, the priest decides a date and time that is auspicious and apt for the wedding. And with this ritual, a new beginning takes place.

After the groom performs the Vinayakyantra puja, the priest reads out the letter regarding wedding details at the groom’s house. This is known as the Lagana patrika vachan. This ritual either takes place while exchanging the rings or at any other auspicious date, as pre-decided by the priest.

Unlike other Hindu traditions wherein an engagement means exchanging of rings between the groom and the bride, in Jain wedding, sagai is mainly a puja. In the sagai ceremony, which is held at the groom’s house, the brother of the bride puts a teeka on his jijaji’s forehead and gives him gifts such as jewellery, money, clothes etc. The Vinayakyantra puja is performed in presence of the immediate family members of the both sides.

After the mada mandap puja is held at both the bride and groom’s houses, the baraat is welcomed with an aarti thaali. The bride’s brother and the groom apply teeka on each other’s foreheads. The groom is given gifts. All married woman recite mangal geet.

Must Read: Maharashtrian Weddings: The Fun Rituals And Traditions That Make Them The Most Beautiful Weddings

In a Jain wedding, the mangal pheras are the most important ritual. The bride and the groom takes pheras around the sacred fire. The father of the bride performs the kanyadaan ritual and places his daughter’s hand in the groom’s hands along with a rupee and 25 paise with rice. While the pheras are going on, the recitation of the mahaveerashtak strot takes place and the ladies sing mangal geet.

In this ritual, a married woman is supposed to tie the bride’s sari to the groom’s shawl. After the couple has completed the pheras and taken the seven vows, the bride now becomes Vamangi, the better half of her husband. They then exchange flower garlands.

After the entire wedding rituals are over, the newly married couple take the blessings of all the elders present at the wedding. This is known as the ashirvada ceremony.

When the bride and the groom arrive at the groom’s residence, the groom's family gives her a huge warm welcome.

Don't Miss: 9 Evergreen Traditions That Make An Indian Wedding The Most Beautiful Celebration Of The World

The entire family prays at a Jain temple and give donations and gifts to the less fortunate.

The reception party is the main event or function hosted by the groom’s family. It is usually held a day or two after the wedding. The friends and members of the groom’s extended family attend this function to give their blessings to the newlywed couple.

Next Read: 8 Beautiful Yet Inspiring Indian Weddings That Broke All Stereotypes

Every ritual, every tradition has a beautiful meaning behind them, and with all of them put together, they just weave magic! And such is any Jain wedding. Well guys, do let us know in the comments section below your thoughts about Jain wedding traditions and rituals.