Kumar Sanu's son, Jaan Kumar Sanu is a contestant in 'Bigg Boss 14' and in an episode, he spoke about his parents' separation and the importance of his mother in his life.

Parenting is a tough job and for a single parent, the journey becomes even more difficult. Sure, there are moments that keep the parent moving forward and whenever challenges put them down, a smile on their little one’s face is enough to make their day. A single parent becomes an idol and guide for the little one, and sets an example for them to follow. They play the role of a father and a mother both, to the little one and make sure to give the best of everything to them. (Also Read: Sameera Reddy Reveals Why She Planned Second Child And What She Asked Herself Before Taking Decision)

The King of Melody, Kedarnath Bhattacharaya a.k.a. Kumar Sanu became a prominent part of the industry with his soothing voice. Son of popular Bengali singer, Pashupati Bhattacharya, Kumar was first noticed by the famous ghazal singer, Jagjit Singh and had made his debut as a playback singer in 1990. Kumar shot to fame in 1991 with Aashiqui and two years later, he became a Guinness World Record holder for singing 28 songs in a single day. More than Kumar’s professional life, his personal life made it to the headlines. Kumar had married Rita Bhattacharya during the mid-80s but had parted ways a few years later and were granted divorce in 1994. The most controversial show, Bigg Boss is back with its fourteenth season and it brought along loads of drama and gossips to spike the TRPs like nothing else. Kumar Sanu’s son, Jaan Kumar Sanu is a contestant in Bigg Boss 14 and in an episode while speaking to his fellow inmates in the house, Jasmin Bhasin, Sara Gurpal and others, he spoke about his parents’ separation. Jaan said, “For me, my mother plays the role of both parents. My parents separated when my mother was six months pregnant with me, hence, I have grown up with her only since childhood. My mom is both a mother and a father to me. Before entering the Bigg Boss House, what worried me most was that who will now take care of my mother. My thinking when it comes to love is old school because of my mom, I feel love only happens with one person and we should only be with one person. I am just like my mother.” 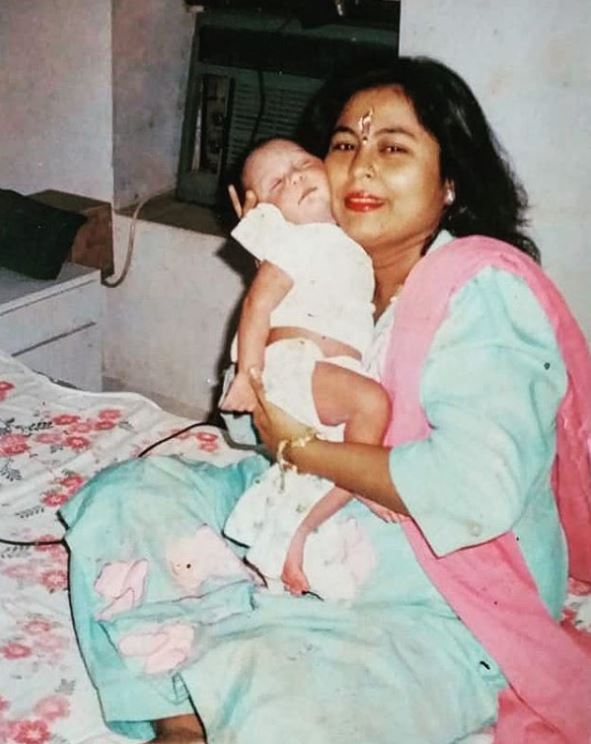 Sometime back, Graphic Designer and one of the funniest men on social media, Akshar Pathak had taken to his Twitter handle to share a meme on Jaan Kumar Sanu. Creating a meme on Jaan’s name, Akshar had tweeted, “Back when I learnt that bappi lahiri has a son named bappa lahiri I thought nothing could possibly ever beat that but today I learnt that kumar sanu has a son named kumar janu.” Clarifying that his name is not 'Kumar Janu', Jaan had written, "Hi, I am Kumar Sanu's son and my name is Jaan Kumar Sanu. Meme mat banao yaar." To which, Akshar thanked Jaan for being such a sport and had replied, “@jaan.kumar.sanu are you telling Google is lying?! (also thanks for being such a sport) (also pls tell your dad I’M A HUGEEEEEE FAN).” Jaan had replied, "@aksharpathak absolutely bro! Will convey the message!! And yes, I've been trying to get the Google thing changed because Gita pe haath rakh ke kehta hu I am not Kumar Janu." (Also Read: Aditya Narayan Reacts To His 'Crush', Neha Kakkar And Rohanpreet's Wedding, Speaks On Settling Down) 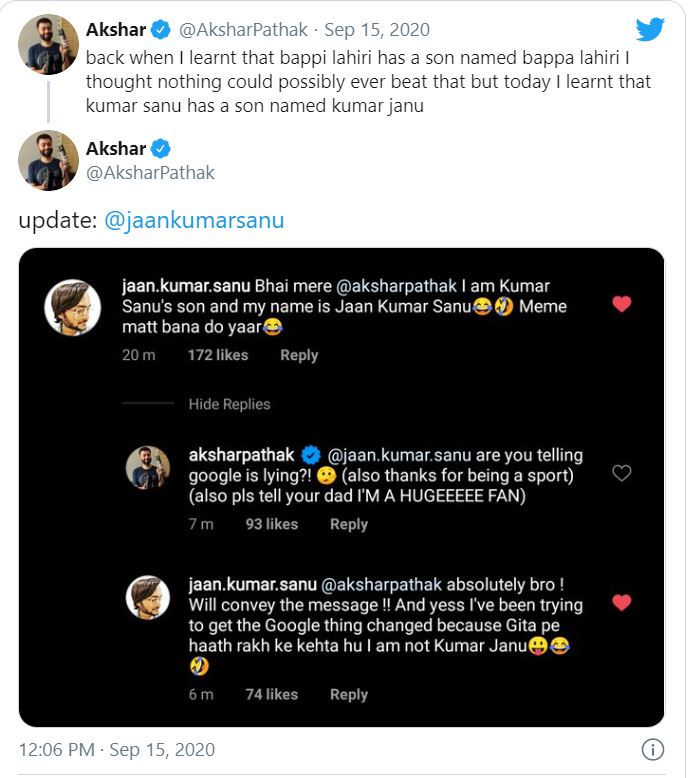 To mark his mother’s birthday on September 22, 2020, Jaan Kumar Sanu had posted a picture of her, posing with a big bouquet of roses. Jaan had penned a beautiful note in Hindi for his mother in the caption, which could be read as “Ma nahi hoti toh main na hota. Ma hai toh khushiyan hai. Ma hai toh muskurahat hai. Ma hai toh zindagi hai. Ma hai toh sab kuch hai. Kyunki ma hi toh meri sab kuch hai. Happy birthday Maa! #HappyBirthdayMaa #LoveYouTheMost #YouAreTheBest.” On Father’s Day, Jaan had wished his mother, who has played the role of both parents since his birth, and had written, “Happy Father's Day. Celebrating the person who has been both mother and father to me since my birth.” 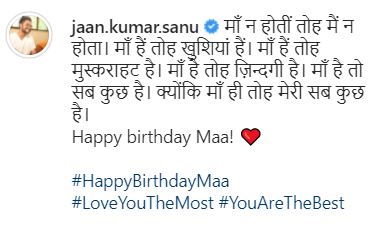 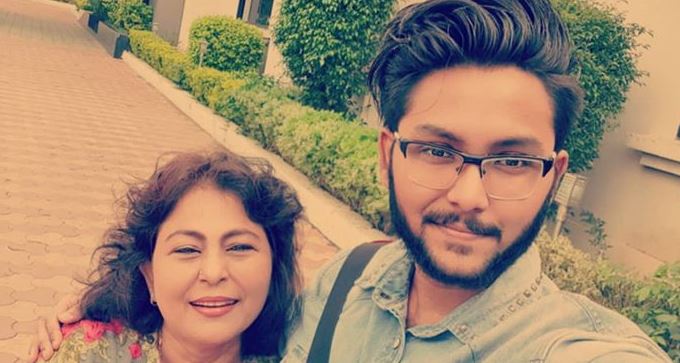 Kumar Sanu’s two children, daughter, Shannon Kumar and son, Jaan Kumar Sanu had decided to follow their father’s footsteps and pursue their career in singing. In an interview with the Hindustan Times, Kumar had revealed that he never forced his kids into taking up singing career, and was quoted as saying, “Interestingly, they both have been following in my footsteps. I never forced them to choose music as their career, it was their own decision. I believe that they (children) should be allowed to purse their dreams. Doing so will always help them come up with good work and extraordinary results. That will also make the parents feel proud.” (Also Read: Karan Johar Pens An Emotional Tribute For Father Yash Johar As Dharma Productions Completes 40 Years) 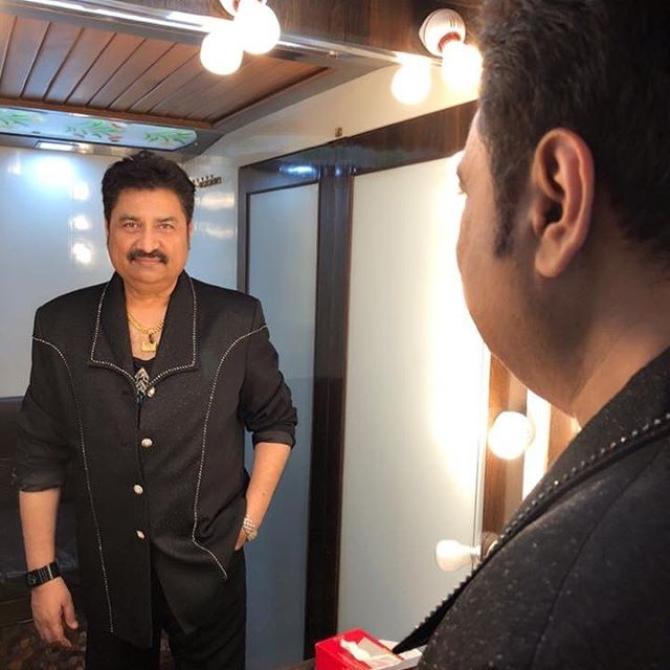 We wish Jaan all the best and we hope he wins Bigg Boss 14! 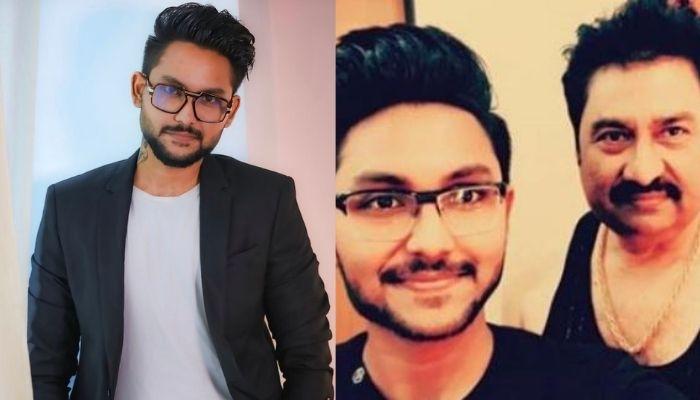 Jaan Kumar Sanu had become a household name with his stint in the reality show, Bigg Boss 14. He had entered the show as the popular singer, Kumar Sanu’s son, however, during the show, the audience got to know about their strained relationship. The ground-breaking statements by Jaan about his