As Shahid Kapoor is celebrating his 40th birthday today, scroll down to see how is brother, Ishaan Khatter wished him!

Birthdays always bring a sense of joy and excitement, no matter how old you grow. And you know you're surrounded by loving and caring people in your life if your loved ones are more excited about your birthday than you. Bollywood actor, Shahid Kapoor is one such lucky soul. Shahid Kapoor is the half-brother of one of the promising young actors of this generation, Ishaan Khatter. The Kapoor-Khatter duo is a blast together as we have seen in many media interactions and talks shows. From pulling each other's leg to spilling each other's secrets, from heaving praises on each other to standing up for each other, this celeb brother duo is a full-on entertainment package, and their fans love even their Instagram banter. (Recommended Read: Nakuul Mehta's Wife, Jankee Parekh Opens Up On Her Life Post Their Baby Boy, Sufi's Birth)

Ishaan Khatter is Neliima Azeem's (Shahid Kapoor's mother) son from her second marriage with Rajesh Khatter. He is about 15 years younger than Shahid, and the superstar dotes on his younger brother. Like Shahid, Ishaan has created a huge fan following his first appearance on the silver screen. Known for his incredible acting and impeccable dance moves, Shahid has incorporated the same in his younger brother as well. As Shahid Kapoor is celebrating his 40th birthday today, scroll down to see how is brother, Ishaan Khatter wished him! 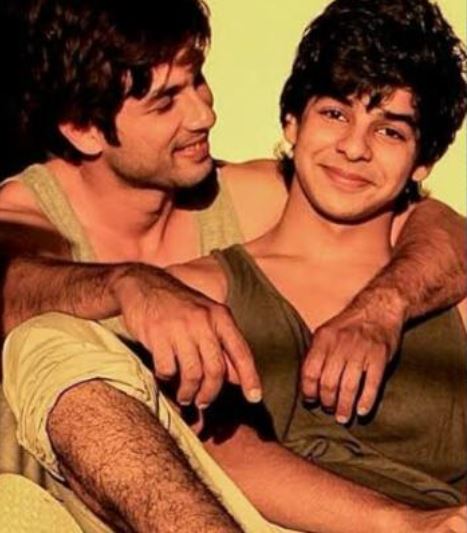 Taking to his IG handle on February 25, 2020, Ishaan Khatter posted a collage of then and now pictures with his 'bade bhai', Shahid Kapoor. On one side, we can see an unseen childhood picture, in which a teen Shahid can be seen holding baby Ishaan in his hands and smiling brightly for the camera. In the second and recent one, the brother duo can be seen looking at each other while posing for the camera. Alongside the picture, Ishaan penned a sweet message for Shahid which can be read as "Zindagiiiiii kaisi hai paheli haaye. Kabhi toh hasaaye, kabhi yeh rulaaye. But through it all.. I’ll always love you, bade bhai. Happy birthday." 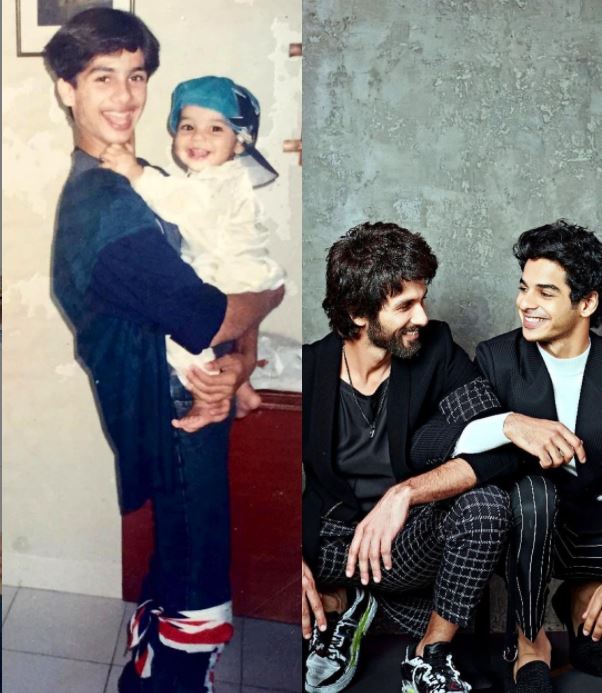 Shahid Kapoor and Ishaan Khatter are 'half-siblings', yet they share a relationship like real brothers. On November 1, 2020, Ishaan had turned a year older and his brother, Shahid had wished him in the most adorable manner. The actor had shared a goofy picture with Ishaan on his IG handle. Alongside it, he had written, "Happy birthday Ishaan. May you be everything you deserve to be. Loads of love." On this, Ishaan had immediately commented, "I love you bhai. Your blessings mean the world to me. Your light is the brightest and I’m lucky to soak it in." (Also Read: Abhinav Shukla Reveals The Real Reason Why He And His Wifey, Rubina Dilaik Wanted A Divorce) 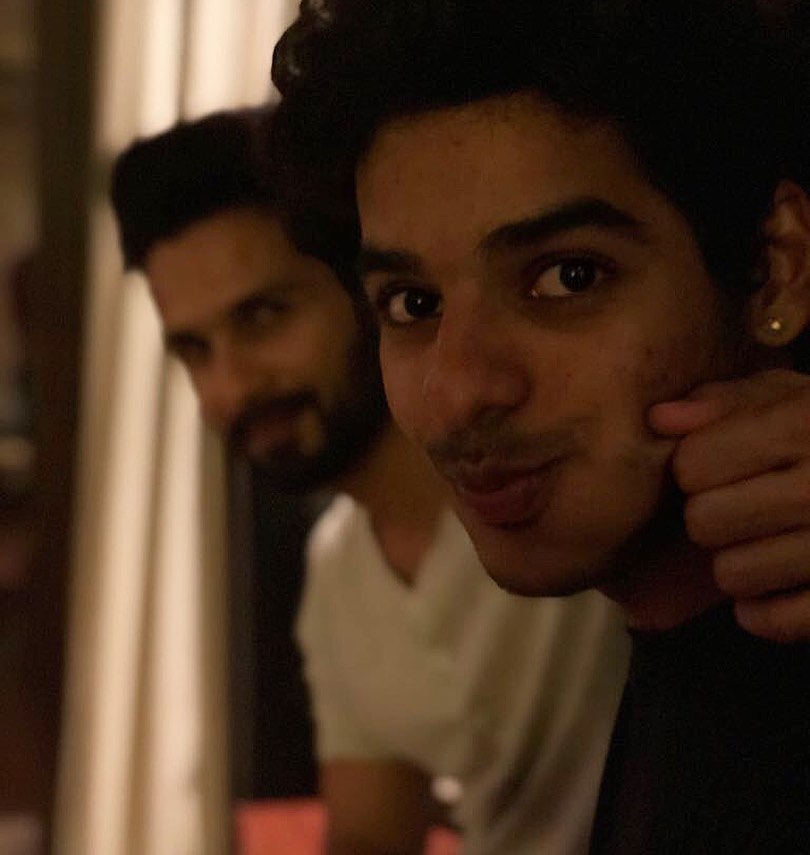 In an interview with the Hindustan Times, Ishaan had opened up on being referred to as Shahid's brother. He had said, "I am very proud of the fact that I am his brother." Ishaan had further clarified that he doesn't intend to ride on his brother's fame. The 24-year-old actor had stated, "I don't intend to ride on his fame or anything of the sort. If somebody recognises me as his brother, I don't have an ego about it. That's not something that would ever bother me. But I am very aware of the fact that I started getting recognised as his brother when I was 15. Before that, not many people knew too much about me. I started being seen in one-two places with him, then how the media is — there was curiosity about a boy who's coming into a certain age." 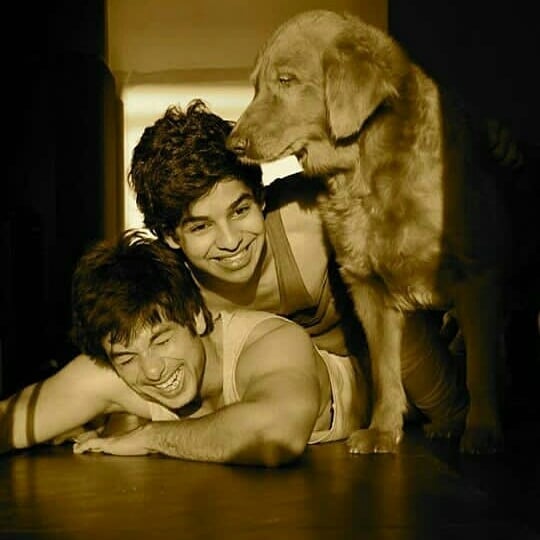 The internet loves Shahid and Ishaan's random Instagram banter. On December 22, 2020, Shahid had shared a jaw-dropping monochrome picture on his IG handle. Posting a black-and-white mirror selfie on his Instagram handle, Shahid had captioned it as "So that's what it feels like to be in front of a camera". The picture had left Ishaan impressed, and he had dropped a comment, "So that's what it feels like to be ageless… thu thu" followed by an evil eye emoji. To which, Shahid had replied, "@ishaankhatter did you just spit on me". Ishaan had then said, "@shahidkapoor with a mask." (Don't Miss: Soha Ali Khan Spends Some Quality Time With Her Baby Girl, Inaaya Naumi Kemmu In The City) 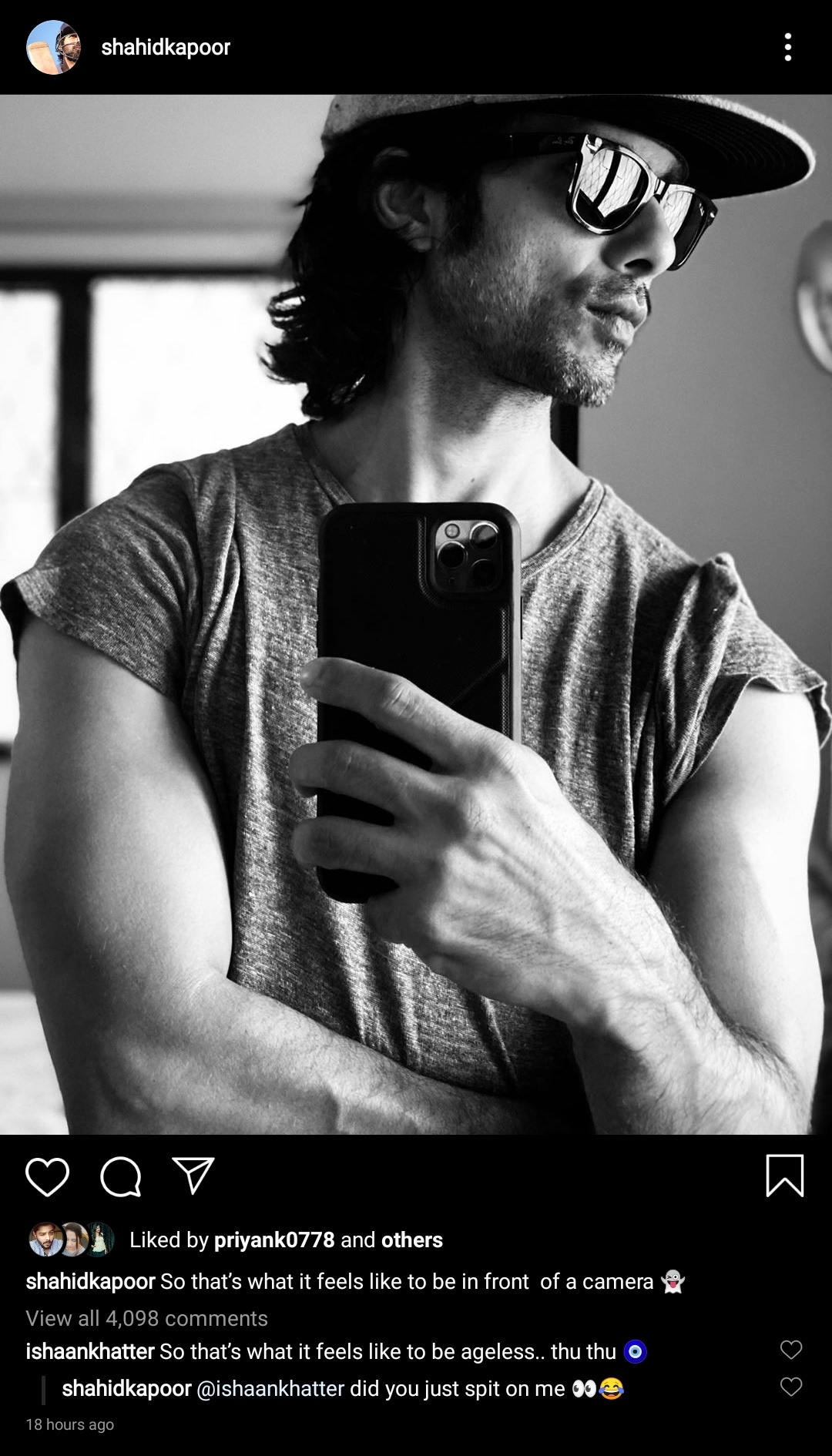