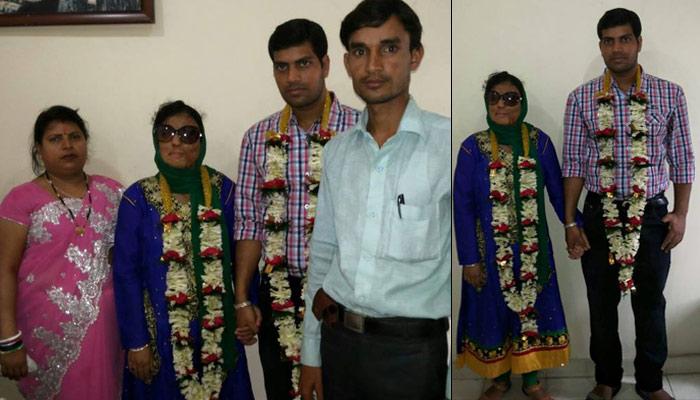 Every wedding season, we get to witness a lot of big fat Indian weddings that look no less than a fairytale. A high-profile couple, a lavish venue, glamorous guests, and everything else that is needed to make a wedding a dreamy affair is a common sight these days. But, the wedding story of this couple has none of these things, yet it is truly surreal!

Well, we are talking about the wedding of an acid attack survivor, Sonali Mukherjee, to an electrical engineer, Chittaranjan Tiwari, who tied the knot on April 15, 2015. When we read the story of this couple, we could not stop ourselves from sharing the same with you. So, let us tell you all about this inspiring wedding story.

The real-life heroes and their love story

Yes, both the bride and the groom are truly the heroes of our society. The bride, Sonali Mukherjee, was attacked by three men on April 22, 2003, while she was sleeping on the terrace with her family. They poured acid on her, which melted away her face and diminished her ability to see and hear. They did all this to seek a revenge as she rejected their sexual advances. She was only 17 at the time of this accident. Her family had to sell everything they had to pay for her surgeries, as they received no aid from the government. On the other hand, the accused men were released soon on bail. Sonali came into limelight when she appeared on the popular television show hosted by Bollywood superstar, Amitabh Bachchan, Kaun Banega Crorepati, in 2012. Even the superstar was inspired to see her courage for continuing her fight against all the odds. 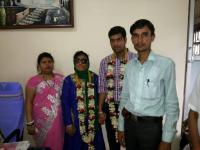 The groom, Chittaranjan Tiwari, is an engineer from Jamshedpur, Jharkhand, and works at a steel plant in Orissa. He came to know about Sonali’s story through media, and was deeply moved to hear it. He sent her a friend request on Facebook, which she accepted. They even started talking over the phone, and he gradually fell in love with her. After talking over the phone and Internet for around four months, they met for the first time and he proposed to her. And, the two had a court marriage on April 15, 2015, in Bokaro, Jharkhand.

Talking about her love story to Times Of India, Sonali said:

"Yes, life has come full circle indeed. He (Chittaranjan) saw me in a crime feature on television and was intrigued by my story. Nine months ago he contacted me through social media and we began speaking over the telephone. He part-funded my treatment from his salary as well. We met for the first time five months ago and he later proposed marriage."

In the same interview, she also told about how their families feel about this marriage:

“My parents were very happy and gave their blessings readily, so we performed a court marriage on April 15. His relatives are partly supportive. I hope to win them over with love and humility."

Sonali certainly feels very lucky to have Chittaranjan in her life. And, after coming out of the courtroom, she expressed the same as she spoke to another leading daily, News18:

"My life had come to a standstill, but Chittaranjan has brought me back the joy and happiness which was lacking."

Recommended Read: We Felt Like Giving This Father A Hug When He Made His Daughter And Her Groom Cry

While Sonali’s struggles showed the harsh side of our society, this beautiful phase of her life totally proved that good people do exist in the very same society. With this, team BollywoodShaadis wishes this beautiful couple a very happy married life ahead.

The untimely demise of late Bollywood actor, Sushant Singh Rajput had encouraged many celebrities to come out and raise their voice against the existing nepotism in the industry. Among many, one actor, who has raised his voice against this issue is Dev D, Oye Lucky! Lucky Oye!, and Chopsticks fame, Abhay